How the U.S. Navy Is Learning to Beat Anti-Ship Missiles 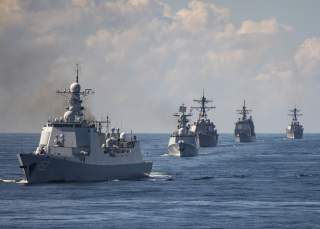 When USS Mason fended-off several anti-ship cruise missiles (ASCMs) near Yemen a year ago, it was a minor event: a few shots fired, no one hurt, mission continued. But it was noteworthy for its many tactical, operational and strategic implications.

On October 9, 2016, Mason’s Aegis combat system detected two ASCMs launching thirty miles away in Yemen. It responded with two long range Standard Missile interceptors, one medium range Evolved Sea Sparrow Missile interceptor and a Nulka missile radar decoy. One ASCM (possibly intercepted) went down twelve miles out, while the other crashed into the sea nine miles out, so the ship did not need to employ its short range Phalanx gun.

On October 12 Mason faced a single ASCM and intercepted it eight miles out. Its defense against more ASCMs on October 15 also succeeded.

ASCMs have been a primary ship-versus-ship weapon for fifty years, ever since INS Eilat's sinking on October 21, 1967. But Mason’s success is apparently only the second time a warship’s defensive missile intercepted a hostile ASCM. (HMS Gloucester used a Sea Dart missile to intercept an Iraqi Silkworm on February 25, 1991.) That itself merits a footnote in naval history.

It was also the first hostile interception for Aegis and its components. The system originated during the Cold War to counter ASCM-laden Soviet warships. It must have been gratifying for engineers and planners to see years of technological development and crew training finally pay off, as the real Aegis-versus-ASCM scenarios apparently unfolded in textbook fashion.

Those engagements furthermore gave the U.S. Navy a rare opportunity to update its anti-air warfare textbook. The Surface and Mine Warfighting Development Center studied the actions for potential improvements in training and doctrine, then distributed the lessons across the surface fleet.

(The rarity of real engagements motivates my missile combat research. My mathematical models are simplistic, but hopefully provide clues about offensive-defensive firepower relationships, effective salvo sizes and the value of attacking first.)

Other lessons, or reminders, appeared at the operational level. Heavily-armed Mason’s success contrasts with the unarmed transport Swift’s being set ablaze eleven days earlier by another ASCM from Yemen. As Vadm. Joseph Mulloy noted, ships now need “a fabulous set of radar and missiles” to survive in the littoral regions of hostile major powers or non-state actors. The incidents undoubtedly added to the debate about the Littoral Combat Ship’s fitness for littoral combat.

The asymmetry extends to defense economics. Mason’s expended munitions cost an order of magnitude more than the threatening ASCMs.

Mason’s success with Aegis is good news at the strategic level too, since American and allied fleets depend on that system around the world. Dependable missile defense is a prerequisite for carrier strike groups and amphibious forces to execute missions near hostile shores. Mason’s attackers fired ASCMs one or two at a time. Countries employing anti-access area-denial strategies could have aircraft, ships, submarines and/or coastal batteries firing them in dozens.

All told, there is a lot riding on USS Mason’s success.

Michael J. Armstrong is an associate professor of operations research at Brock University. He studies mathematical models of missile combat at sea and over land.