How the U.S. Navy is Trying to Make China's 'Carrier-Killer' Missiles Obsolete 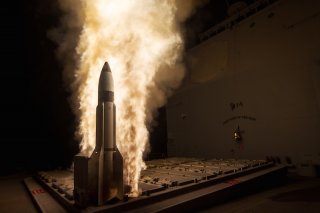 "This test demonstrated the capabilities MDA and the Navy are delivering to our fleet commanders," Vice Adm. Jim Syring, director of the MDA said in a statement. "The SM-6 missile and the Aegis Weapon System continue to prove that they are critical components of our nation's multilayered, robust ballistic missile defense system."

During the test, John Paul Jones—which is fitted with the latest Baseline 9.C1 version of the Aegis combat system—engaged a “complex medium-range ballistic missile target.” That suggests that the target was representative of a maneuvering incoming warhead similar to the ones mounted on the Chinese DF-21D or DF-26 anti-ship ballistic missiles.

If MDA test was indeed representative of a DF-21D or DF-26 type threat, it would help to explain why the U.S. Navy is so confident of its ability to operate inside those weapons’ threat rings. Earlier this year, I directly asked the U.S. Navy’s Chief of Naval Operations, Adm. John Richardson, if he was confident in the ability of the aircraft carrier and its air wing to fight inside an A2/AD zone protected by anti-ship cruise and ballistic missiles as well as advanced air defenses. Richardson’s unequivocal answer was: “Yes.”

The MDA also revealed an interesting fact about the SM-6 missile. Unlike other ballistic missile interceptors, the SM-6 uses an explosive warhead to defeat ballistic missile threats. Other missile defense interceptors—such as the Raytheon Standard SM-3—use kinetic-energy hit-to-kill technology. The explosive warhead is likely required for the missile’s multi-mission capability.

The SM-6 is rapidly becoming a multipurpose wonder-weapon of sorts. While the SM-6 was originally designed to provide the Navy’s surface combatants—such as the Ticonderoga-class missile cruisers and Arleigh Burke-class destroyers—an expanded over-the-horizon air defense capability against enemy aircraft and cruise missiles as part at the Naval Integrated Fire Control – Counter Air construct, it has been adapted to other purposes.

In addition to countering air threat, it has been adapted for ballistic missile defense and as a long-range anti-ship weapon. Earlier this year, John Paul Jones sank the decommissioned Oliver Hazard Perry-class frigate USS Reuben James (FFG 57) with a SM-6 missile. “This test event demonstrated Raytheon's decades of continued technological development and partnership with the U.S. Navy,” said Dr. Taylor Lawrence, president of Raytheon’s missile systems division, in a statement released on March 7. “The ability to leverage the Standard Missile Family and the legacy AWS [Aegis Weapon System] in newly fielded systems brings additional warfighting capability to the U.S. Fleet.”

Finding multiple uses for the SM-6 was the brainchild of the Pentagon’s Strategic Capabilities Office. “It took an anti-air missile—excellent missile—of the Navy's and figured out how to make it also capable of attacking ships. Very sophisticated, long-range, fast, very lethal weapon. And we had bought it for one reason. They found a way to use it in another way as well, sort of doubling the value of our investment,” Defense Secretary Ashton Carter told reporters on Nov. 17. “That's the kind of thing we've gotten out of the SCO. Very creative group of people that work with and for all the services and help them figure out how to be even more innovative with the programs they have.”

Indeed, the U.S. Navy seems to have hit the jackpot with the SM-6—which by all indications is an excellent weapon. If it proves to be effective against the Chinese DF-21D and DF-26, it may well help preserve America’s access to Western Pacific.