How the U.S. Navy Will Make Its Aircraft Carriers (and the F-35) Even More Lethal 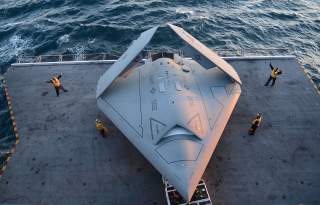 The new carrier-launched stealthy tanker, called the MQ-25A Stingray, will be designed to extend the combat range of key carrier air-wing assets such as F/A-18 Super Hornets and F-35C Joint Strike Fighters.

The Navy is advancing plans for a first-of-its-kind stealthy, cyber-hardened unmanned aerial refueling drone to the next developmental phase for eventual service on an aircraft carrier deck by the early to mid 2020s.

The concept of the effort, called the MQ-25 Stingray, is to fortify the Carrier Air Wing with a hack-proof unmanned refueler able to massively extend the strike and mission range of its on-board aircraft.

The service has awarded four development deals for the MQ-25 to in anticipation of a formal proposal to industry by sometime next year. Deals went to Boeing, Lockheed Martin, General Atomics and Northrop Grumman.

The objective of the contract is to conduct activities to refine concepts and develop trade space for requirements generation in advance of the start of Engineering and Manufacturing Development, she added.

The new carrier-launched stealthy tanker will be designed to extend the combat range of key carrier air-wing assets such as F/A-18 Super Hornets and F-35C Joint Strike Fighters. Such an ability is deemed vital to the Pentagon’s Anti-Access/Area-Denial phenomenon wherein long-range precision guided anti-ship missiles are increasingly able to target and destroy aircraft carriers at distances as far as 1,000-miles off shore

The threat, including weapons such as the Chinese-built DF-21D missile referred to as a “carrier-killer” able to destroy targets more than 900 miles off shore, is sufficient to potentially prevent aircraft carriers from operating in closer proximity to enemy coastlines in order to project power and hold enemy targets at risk.

“MQ-25A Stingray will help to preserve the power projection dominance of the nation's carrier fleet. MQ-25A Stingray is the next step in the Navy's evolutionary integration of unmanned air systems into the carrier strike group's operational environment.  As part of our incremental approach this will allow the Navy to deliver carrier-based unmanned capability to the fleet faster,” Cosgrove said.

While the value of carriers is, to be sure, far from being questioned, there is an ongoing study directed at taking up and analyzing these questions. Results from the study are not yet available, however some Navy officials have indicated that one potential solution might be to change the configuration of the new high-tech Ford-class aircraft carriers after the first three are built and deployed.