How the West Can Still Lead the World 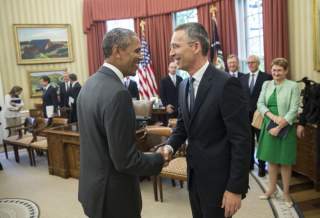 Listen to any European or American leader talk about the transatlantic relationship these days and you will hear a handful of common refrains. Major policy addresses of this kind often start with the recognition that the world has changed. Europe and the United States face unprecedented challenges on the world stage, ranging from asymmetric warfare to non-state actors to the diffusion of technology to the return of great power politics. The speaker then reassures the audience by noting that, contrary to those arguing that the West is in decline, Europe and the United States come at these challenges from a position of strength. It has been the West, after all, that spent the last sixty years establishing the world order, and it is the West that has the ability to maintain and further develop the international order according to its common values.

Many, myself included, find these speeches reassuring. They ease the minds of policymakers that feel overwhelmed by world events and breed transatlantic confidence at a time of considerable uncertainty. But are they right? Even if one assumes that the West has the ability to shape today’s complex security environment (which is by no means a foregone conclusion), one has to ask if it possesses the will, innovation, and resources to actually do so. In truth, what Europe and the United States are actually doing in response to the changing face of geopolitics makes what they are saying far less inspiring.

There is no question that the West deserves high praise for the creation of a global network of international institutions, laws, treaties, and norms. From the United Nations to NATO to the World Bank to the OECD, the West has invested decades in building, maintaining, and reforming the bedrock of the international order. With emerging powers, revisionist powers, and non-state actors actively challenging that system, though, how much is the West doing to either counter or adapt to those challenges?

The heads of major international institutions will tell you “a lot,” rattling off a long list of internal reforms over the better part of the last two decades. But such reforms have done little to halt Russia’s actions in Ukraine, Bashar al-Assad’s barrel bomb attacks against the Syrian people, the rise of Islamic State (IS), or China’s aggression in the East and South China Seas. Why? Many of the oft cited “reforms” are simply too unimaginative and timid. By tinkering on the margins, these reforms do little to get at the heart of the challenge. Bold structural reforms on the scale of revisiting the consensus rule in NATO or the veto on the UN Security Council are considered impossible, counter to our interests, or too high risk.

The West seems to have forgotten, though, that it did not come to be the architect of the global system in the 1940s and 1950s by avoiding risk and relying on conventional approaches. Quite the contrary, the individuals that built that foundation often took considerable political, professional, and strategic risks both at home and abroad. In fact, several of the obstacles that policymakers faced at the time – a disinterested public, resource constraints, and high stakes negotiations with friends and foes alike – resemble some of those we face today.

Take popular support: Similar to the retrenchment instincts present on both sides of the Atlantic today, American and European publics in the late 1940s were skeptical about the value of creating new international institutions that would require making long-term commitments to the economic prosperity and security of Europe. Those that worked to build a new liberal order, therefore, often put their political careers on the line and fought tirelessly to counter the skeptics, who were sometimes inside their own administration. This was particularly true for President Truman who had to persuade members of his own inner circle, the U.S. Congress, and the American public about the value of creating the Marshall Plan in 1947.

Of course, today’s era differs quite significantly from the post-World War II era. In the span of the last two decades, the world has experienced a dramatic diffusion of power, which means that the US and its Western allies can no longer produce and shape the outcomes they once did. Furthermore, the West is living in an era characterized by unprecedented interconnectedness in the shadow of globalization. As a result, both the international system and individual nation states are straining to respond to rising expectations, an array of domestic and economic pressures, and broader questions about the value of international cooperation.

Strengths to Build On

Despite these challenges, the West still benefits from a number of comparative advantages. It can build and run international coalitions like no other; its collective economic strength remains a powerful force in the global economy; its education system continues to attract students from around the globe; its economies have shown a remarkable capacity to repair themselves; and its values, while by no means admired by everyone, still serve as a beacon to many around the world. And for better or worse, the world still relies on the West to solve global problems and underwrite international security.

In order to adequately address today’s complex security environment, though, Europe and the United States need to envision and promote change on the scale of what we witnessed at the end of World War II. Small-scale tactical shifts that avoid taking risks and fail to challenge the status quo simply will not suffice. We need leaders willing to buck the system, to get their hands dirty, and not only to think but to do the unthinkable. A bold, ambitious agenda that matches the enormity of today’s complex security challenges should include the following goals:

Launch and lead a global effort to redesign the international system so that it reflects today’s balance of power and is positioned to address today’s challenges, from the rise of non-state actors to asymmetric warfare to the diffusion of technology. If the UN refuses to alter the composition of the Security Council, it is time to consider a more inclusive architecture. In establishing the rules and distribution of power of any new model, however, the founders should consider countries’ past behavior. In other words, countries that act primarily as spoilers or have repeatedly violated global norms should not be rewarded with a leadership role in the creation of future structures.

Lead the world in the establishment of global norms in a number of new areas, including cybersecurity, unmanned and autonomous systems, genome editing, and disruptive technology like 3D printing. The West, particularly the US, prides itself on its ability to innovate, which has brought tremendous economic and technological benefit. Occasionally, though, countries like the US fail to foresee (or prefer to deny) the challenges that such innovation may someday bring to the global system and instead take advantage of the fact that few rules exist around a particular technology’s use. This is shortsighted. While establishing global norms is no small task and inevitably involves trade-offs and often years of tense negotiations, the West needs to reassert its leadership role in this area.

Break down the barriers that prevent international organizations from working together. The EU and NATO, for example, have struggled for years to find ways to establish institutional links. But age-old objections tied to the situation in Cyprus have prevented anything of real substance from taking root. With global challenges such as cyber- and energy security straddling the mandates of both institutions, the West can no longer afford to keep these two institutions on separate planes. The only way to develop innovative policies and tools to cope with a range of cross-cutting issues is to abolish longstanding barriers to cooperation. That should also include the barriers that exist between the public and private sectors, especially in the area of cybersecurity.

Double down on efforts to promote and finalize the Transatlantic Trade and Investment Partnership (TTIP). Leaders on both sides of the Atlantic clearly see value in establishing a new trade agreement that would provide much needed growth, position the two sides of the Atlantic to set global standards in a number of sectors, and send a clear message about the US and EU’s willingness to open markets. But their approach to date has been far too risk-averse and rooted in the hope that the merit of their arguments will ultimately win the day. Just as Truman launched an ambitious campaign to educate the American public about the Marshall Plan, Washington and Brussels need to launch their own engagement plan that would answer tough questions, directly engage stakeholders, and counter the anti-TTIP narrative dominating the debate. This project’s value stretches far beyond creating jobs and boosting exports but one would never know that from the way the two sides are promoting it.

Develop an international home for global forecasting and risk assessment. In 2014 the West was caught completely off guard by not one but three separate international crises – Russia’s annexation of Crimea, the rapid spread of Ebola, and the rise of IS. While it is impossible to predict with certainty where the next crisis might erupt, the West should find or create an international forum for global forecasting where groups of countries can prepare for the unexpected. The West should also dedicate resources to collective risk assessment. One possible starting point would be an examination of the risks involved in the gradual collapse of the international arms control regime. Russia is in direct violation of the INF Treaty and yet the West is still spending most of its time wordsmithing the documents for the next NPT Review conference. What the West should be doing is discussing tectonic shifts that could lead to additional noncompliance, a complete withdrawal, or decreased prospects for future agreements and how the West might prevent such shifts from actually occurring.