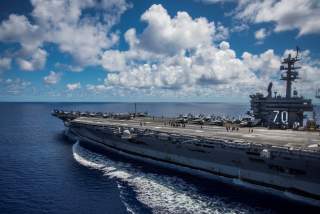 Once bitter enemies, the United States and Vietnam are increasing defense and intelligence cooperation in the face of growing Chinese maritime encroachment in the South China Sea.

US President Donald Trump has unveiled a program of using quiet diplomacy and behind-the-scenes discussions to block Chinese attempts to take over the South China Sea through a covert campaign of island-building and militarization. During his November 10-12 visit to Vietnam, Trump agreed to sharply increase security cooperation, including stepped-up military support and, surprisingly, intelligence cooperation.

The joint US-Vietnam statement outlines the new relationship. “The two leaders underscored that their two countries would deepen and gradually expand security and intelligence cooperation, enhancing information sharing and joint training on issues of mutual concern,” it said.

Cooperation on bolstering cyber security, a key concern of both countries – which have both been targets of Chinese hacking – will also be stepped up. The two will exchange delegations and information-sharing “in order to promote an open and secure cyberspace.” The Vietnamese also are seeking closer collaboration on aviation safety and security and counterterrorism.

A senior White House official traveling with the president said Chinese encroachment in the South China Sea and the militarization of newly created islands was on Mr Trump’s agenda for discussion with Vietnamese President Tran Dai Quang in Hanoi. “The very clear, consistent message from the president on the importance of maintaining freedom of navigation in the South China Sea will come through loud and clear,” the official said prior to the meetings.

The senior official added that Trump would also voice American concerns about the “militarization of features in the South China Sea.”

“The two leaders underscored the strategic importance to the international community of free and open access to the South China Sea, the importance of unimpeded lawful commerce, the need to respect freedom of navigation and over-flight, and other lawful

uses of the sea,” the statement said.

Without mentioning China, it called on regional states to avoid “escalatory actions, the militarization of disputed features, and unlawful

restrictions on freedom of the seas.” It also reaffirmed efforts to create a

code of conduct for the South China Sea and for all claimants to clarify maritime claims with international law.

In a bid to counter the US program, Chinese supreme leader Xi Jinping followed Trump’s visit with a formal state visit of his own.

Xi stated in public remarks that both countries should safeguard friendly cooperation but there was no announcement of the kind of defense and intelligence cooperation contained in the joint statement issued during the Trump summit.

Tensions were raised between China and Vietnam in April 2016 when China’s state-run China National Offshore Oil Corp. moved an oil-drilling platform to waters near the mouth of the Tonkin Gulf,

near the Paracels. It was the third time since 2014 that the rig had been moved near Vietnamese waters, prompting Hanoi to demand China remove the platform.

A statement issued by Vietnam and China on November 13 said both countries vowed to avoid such actions in the future.

Trump, in his public comments in Vietnam, sought to play down the sea dispute. He emphasized plans for increased trade but made no mention of the growing Chinese militarization campaign in the sea.

The US Navy has been conducting warship passages near the islands to challenge China’s claims that the islands are in its territorial waters.

Trump focused his comments on closing what he said is a US$32 billion trade imbalance between the US and Vietnam. He announced US$12 billion in bilateral trade deals.

The American president’s major agenda item for his 10-day Asia visit was seeking regional support for curbing North Korea’s nuclear program, and he received some backing from the Vietnamese. The

The Trump approach toward Vietnam appears designed to use trade and increased defense cooperation with the Southeast Asian country in a bid to pressure China into backing off its expansive and aggressive claims to control most of the South China Sea.