How Will Russia Influence the Upcoming Run-offs in Bulgaria and Moldova? 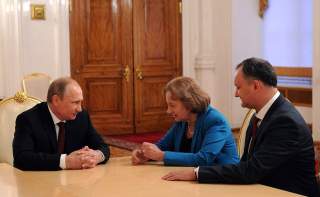 With all the events of 2016, many truly historic, it is easy not to notice presidential elections in two East-European countries — Bulgaria and Moldova — both conducting run-offs on November 13. These elections are interesting not only because of their influence on the state of affairs in the region, but also because they show the changing role of Russia in the region’s public politics. Up-and-coming political figures of the region are eager to portray themselves as friends of whomever is necessary for them to be elected. However, Moscow does not rush to associate itself with politicians dubbed “pro-Russian” before they prove themselves as valuable partners.

To understand Eastern Europe, one should distinguish between the concepts of allies and patrons and their clients. Allies are considered equal in contributing according to their capacity to achieve the goals of their coalition. Patrons are mighty states who have the reasons and resources to support and protect their foreign clients. It is an open question how conceivable it is in Eastern Europe to create true alliances and not just patron-client relationships. It seems that the only reason countries of the region associate themselves with major, mostly Western powers, is to receive various forms of one-way support.

During his election campaign, Donald Trump drew a lot of indignation when he reminded Americans that if East-European members of NATO want to be American partners within the alliance, they should be able and ready to adequately contribute to the common defense. This indignation is understandable because Cold War logic still defines American foreign political thinking to a significant degree. If a country — especially in a region of geopolitical tension between the United States and Russia like Eastern Europe — pledges allegiance to Washington, it is supposed to come out of Moscow’s sphere of influence. The country in turn expects continuous support without many obligations towards the United States. The same Cold War logic was visible in Russia’s foreign policy. A visit of a regional politician with good-humored talks in Moscow, Saint-Petersburg, or Sochi, followed by a constructive press-conference used to suffice to be considered “pro-Russian.” However, this approach might be changing in Moscow. The underlying reason is Russia’s many years of problematic relationships with Ukraine’s leadership, which resulted in the overthrow of Victor Yanukovich.

Victor Yanukovich and scores of Ukrainian politicians before him used to speechify in Russia on friendship with its Eastern neighbor and then go on to the West in search of better deals. Meanwhile, Russia’s strategic positions in Ukraine have been deteriorating and were followed by a major geopolitical crisis. In fact, the reasoning of Ukrainian and other East-European politicians, who try to increase their influence and capitalization by shuttling between Moscow and Western capitals, has been always clear – any deal can be followed by a better deal. However, one can ask, what has Russia achieved by associating itself with such “partners”?

Keeping the Ukrainian case in mind, one should ponder whether the leading presidential candidates in Bulgaria and Moldova, labeled by the world media as “pro-Russian,” already have Russian support.

For at least century and a half, Russia’s policy towards Bulgaria has been built on emotion, rather than clear reasoning. Despite this, Russian sympathy toward their Bulgarian brothers and sisters of Orthodox faith has rarely been reciprocal. After the Balkan soil was abundantly watered with the blood of almost 200 thousand Russian soldiers during the 1877-1878 war with Turkey, ending centuries of brutal Turkish oppression of Bulgaria, Bulgarian elites made a well-calculated move drifting into the German sphere of influence. This led to Bulgaria fighting during both World Wars alongside Germans against its Russian liberators.

After the end of the Second World War, Bulgaria became an object of agreements between great powers and, eventually, a part of the Soviet sphere of influence. In 2007, a decade and a half after the collapse of the Soviet Union, Bulgarians, together with other East-European nations, hoped for a significant improvement of their conditions by joining the European Union. But the prosperity never materialized and currently Bulgaria is the poorest country of the EU. During the last ten years, the rhetoric of Bulgarian leaders towards Moscow was not openly hostile, especially when discussing energy projects with Russia. However, this rhetoric did not benefit Russia much. Bulgaria, a member of the EU and NATO, played a significant role in blocking the “South Stream” pipeline project, which was one of the pillars of Russian gas export strategy. One can wonder if there are prospects for change in this relationship. Can Bulgaria become more pro-Russian, especially after the current presidential elections?

The answer is clear – it hardly can. First, the president of Bulgaria is a mostly ceremonial position. Second, even if the elections instigate some sort of turn in Bulgarian politics and the country becomes more pro-Russian, there are no significant projects which could be a base for a possible cooperation between Moscow and Sofia, especially with Bulgaria remaining a member of the EU and NATO. There is no doubt that Bulgarians are interested in some form of economic support from Russia, but Russian economic conditions remain too difficult to waste resources on charity abroad. At the same time, Bulgaria cannot offer any mutually beneficial economic projects to Russia. “South Stream” became “Turkish Stream” and the Russian-Turkish détente is underway after the conflict over the shooting down of a Russian jet last year was resolved. Considering this, it is difficult to share the assumption of the Western media that the victory of Rumen Radev, a former chief of the Bulgarian Air Force, “could push the Black Sea NATO member state politically closer to Russia.” Statements by Mr. Radev, that, for example, “being pro-European does not mean being anti-Russian” are more a sign of his clear foreign-political thinking than an indicator of a coming pro-Russian turn in Bulgarian foreign policy even if he wins.

The situation in Moldova is quite different. Moldova is not a member of the EU or NATO and, thus, it is an object of competing Russian and European projects of economic integration. Besides, any Moldovan leader, however friendly or hostile towards Moscow, has to deal with Transnistria, the breakaway, de facto independent Moldovan region, oriented towards Russia, which has a military contingent stationed there. Therefore, for Russia it is better to have a president who will not support returning Transnistria to Moldova without considering Russia’s positions.

It is no secret that the leading candidate Igor Dodon has declared himself an admirer of Vladimir Putin. However, it is still unclear whether, if victorious, he can be an effective president and a genuine Russian ally. In this regards, it is difficult not to notice that despite all the positive statements on Russia made by Dodon and all the Western media portraying him as extremely pro-Russian, there are not many signs of  open support for him in Moscow. In fact, there is no need for that.

Dodon’s victory will be sustainable only if it is secured by his own resources without major interventions from Moscow. If he can win and later rebuild the Moldovan political system in his favor, it will be his call whether to cooperate with Moscow or not. He can make whatever pro-Russian statements he’d like, but without real significant steps to strengthen the relationship with Moscow, be it Moldovan participation in the Eurasian Economic Union’s integration process or a long-lasting arrangement with Transnistria, he can hardly impress the Kremlin.

In this regard, it is important to emphasize not only the realist nature of Russia’s foreign policy, but also the fact that after the overthrow of Victor Yanukovich, Russian policy has become even more realist. Russia appreciates the costs and the consequences of associating with a domestically weak politician paying lip service to cooperation with Moscow.

To sum up, one can say that Russia is a factor in in both the Bulgarian and Moldovan presidential. However, the importance of this factor should not be overestimated. In the case of Bulgaria, Russia is more of a reference point within internal debates on how to develop relations with the West. For Moldova, Russia still can become a crucial foreign partner, but to achieve this a clear decision should be made by the people of Moldova. The example of the failure of “pro-Russian” politicians in Ukraine is too fresh of a wound for Russia to engage in internal political games in the post-Soviet space with no guarantee that the actors seeking Russian support will be reliable partners.