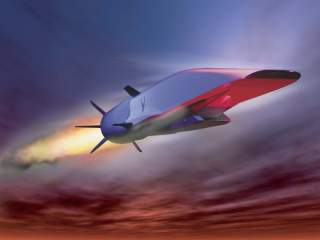 Of all the potentially transformational military technologies that will appear over the next ten years, hypersonic strike weapons, and ultimately, hypersonic platforms, could radically transform future military operations as well as open up the prospect of cheaper and more responsive access to space. The United States, Russia (here and here), China (its programs discussed below) and India (and here) as well as Australia (here and here) all have R&D projects aimed at developing hypersonic propulsion or understanding the science of hypersonics.

Hypersonic flight occurs at velocities five times above the speed of sound (Mach 5 = 6,174km/hr), and current research into hypersonic propulsion is focusing on the Mach 5 to Mach 10 (12,348km/hr) realm based around supersonic combustion ramjets, or ‘scramjet’ engines. The United States’ X-51 scramjet demonstrator flew twice successfully (though three times unsuccessfully) between May 2010 and May 2013, and in the process provided valuable data that may lead to the development of scramjet-based weapons in the future. China also claims to have flown their own scramjet in October 2014, and the United States and China have both tested hypersonic glide vehicles (HGVs). China’s DZ-ZF (previously known as the Wu-14) HGV has flown several times, most recently on November 23, 2015.

The development of hypersonic weapons implies that in future warfare, particularly between major states, speed will assume prominence as a factor for determining victory, alongside information. For example, in considering the implications for the survival of naval surface combatants of China’s early tests of the Wu-14, Andrew Davies noted that hypersonic weapons reduce time of response for defenders to the point where a viable anti-ship missile defense with the traditional layered approaches becomes largely impossible. Instead, naval forces will need new and more responsive technologies like directed energy weapons, electromagnetic railguns or defensive hypersonic missile systems. Ben Schreer suggests that hypersonic weapons indicate a new era of high speed warfare, which reinforces a first strike incentive in a manner that’d be highly destabilizing in a crisis, and suggests a new “cult of the offensive,” where the side which strikes first most likely wins.

Hypersonic weapons will depend on an effective and resilient “kill chain” to function effectively. That means a state that invests in hypersonic weapons must also invest in advanced sensor systems that can detect and track a specific target, and have secure data links from the sensor to the decision-maker and then to the “shooter.” It’s not just about faster missiles—it’s about the technologies that come together to either use such weapons or defeat them. Equally important is a requirement for more agile and responsive command structures that function at a vastly accelerated pace measured in seconds or minutes, rather than hours or days. In a looming age of high-speed warfare, command must be executed equally rapidly, and there cannot be any bottlenecks. High-speed warfare leaves little room for political micromanagement, conferring with legal advice on rules of engagement, or second-guessing tactical decisions. It may be that, as with the debate over lethal autonomous weapons, decision-making is compressed in high-speed war such that a degree of automation is necessary, in some cases taking the human out of the loop entirely, and therefore raising challenging policy issues for many western governments. Conversely, this may not be a problem for states who have no media scrutiny and aren’t constrained by the “Jus in Bello” principles of modern warfare that require discrimination and proportionality in generating military effect.

Hypersonic weapons may also promote an expansion of geographic conceptions of joint military operations, from the scale of theaters to hemispheres. The U.S. Navy’s concept of “Distributed Lethality” is in part designed to offset the threat posed by supersonic antiship cruise missiles like the Chinese YJ-18, or anti-ship ballistic missiles such as the Chinese DF-21D, but hypersonic weapons could expand the geographic scope of that threat without necessarily extending timelines for defenses to respond. Greater speed may be matched by greater range, but absent a corresponding increase in warning times in comparison to supersonic strike weapons. This gives the attacker much more operational flexibility, and will demand greater investment in long-range networked ISR for the defender’s joint expeditionary forces to ensure they can see a distant but fast moving threat sooner.

Therefore, the speed of hypersonic weapons implies new approaches to warfare, centered not just on winning an information edge to enable precision attack, but through exploiting a speed advantage. The proponents of a Revolution in Military Affairs in Information-led Warfare coming out of the 1991 Persian Gulf War argued that winning the information battle is vital for military success. However a new suite of high-speed weapons, of which hypersonic systems are a key capability, suggests that a knowledge edge alone won’t be sufficient. We face rising or returning peer state threats that actively seek to erode our military advantages, and in a twenty-first century “battle for the first salvo,” our slow subsonic weapons and platforms, most with limited range, will be at a severe disadvantage. In the future major power war, preserving our knowledge edge, and being able to exploit a speed advantage will be essential requirements for military success.

Malcolm Davis is a senior analyst at ASPI. This article first appeared in the Strategist.