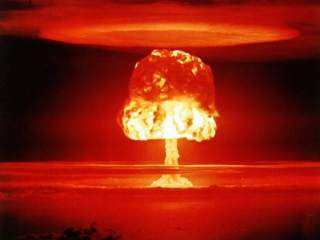 The only defense the United States has against a Russian nuclear attack is the threat of retaliation.  To keep that threat credible, the military maintains a “triad” of land-based missiles, sea-based missiles and bombers that would be nearly impossible to destroy in a surprise attack.

Minuteman III intercontinental ballistic missiles (ICBMs) stationed in the central U.S. that make up part of the American nuclear deterrent remain critical to national security. Eliminating ICBMs as some have proposed would weaken America’s nuclear deterrent that protects its homeland and allies from a nuclear first strike.

ICBMs are deployed in underground silos at three U.S. bases. Current weapons were fielded in 1970 with a planned service life of 10 years, but have lasted over 40 years because they have been refurbished many times.

The U.S. cannot continue to sustain its Cold War ICBM force any longer because it is antiquated and hard to maintain. Thus, the Air Force will develop a new missile as part of the ground-based strategic deterrent program that will be deployed in the 2027 timeframe.

The Air Force’s initial proposal calls for 642 missiles of which 400 would be operationally deployed until the 2070s. But the ICBM force is facing controversy because funding for its modernization will take place simultaneously with replacements of other legs of the Cold War triad.

While modernizing ICBMs is not cheap, they are the least expensive component of the nuclear deterrent, and they provide many benefits that the other legs do not. ICBMs are on constant alert which shortens execution of a president’s decision to launch weapons in response to a surprise attack.

If ICBMs were eliminated, an enemy would only need to strike a small number of targets to degrade the U.S. strategic posture since there are only three bases for nuclear-capable bombers and two bases for ballistic-missile submarines. In contrast, each hardened ICBM silo would have to be targeted separately.

While nuclear submarines are undetectable in the ocean today, a technological breakthrough could occur that would make the oceans less opaque. The sea-based leg might be weakened and could be at risk of being destroyed by conventional forces. Thus, the land leg would increase in significance. Eliminating ICBMs might motivate potential adversaries to try even harder to develop the capability to locate nuclear submarines underwater.

Consider what countries are doing in other parts of the world today to understand the importance of ICBMs to security. Moscow is modernizing its ICBM force to carry 10 nuclear warheads each. Beijing tested its newest road-mobile ICBM twice last year – road mobile ICBMs increase survivability because they do not have set locations for an enemy to target. North Korea recently launched its sixth long-range rocket test that placed a satellite into orbit (testing rockets through satellite launches provides invaluable data for potential future ICBMs).

Deterrence is effective because it causes the enemy to fear a massive retaliatory response; ICBMs in particular ensure an adversary’s objectives are beyond reach because they are on alert and cannot be destroyed by conventional forces. A new ICBM is an expensive but essential investment that will prevent a potential aggressor from launching a nuclear first strike and ensure these fearsome weapons are never used.