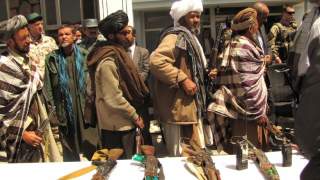 So it turns out that Mullah Muhammad Omar, undisputed leader of the Afghan Taliban, died in the Aga Khan University Hospital in Karachi over two years ago, in early 2013. Rumors of his demise have been common currency among observers of Afghanistan and within the U.S. government, but one after the other, they seemed to have been false. Apparently not.

Denials, accompanied by new policy pronouncements, allegedly from Mullah Omar, were released by the Taliban’s “Quetta Shura” from its “headquarters” in Pakistan. But Mullah Omar’s declarations were never oral. They were all written and attributed by various spokesmen to Mullah Omar, who has almost never met with journalists, never appeared live on radio or television, and for whom only a few very old photographs exist.

The first oddity is how such a reclusive and relatively uneducated man was accorded such religious and organizational veneration as the Taliban’s mullah primus inter pares.  Second, how did such a recluse who abjured contemporary mechanisms of communication (telephones of all kinds and recordings let alone radio or television) hold such undisputed authority for nearly 15 years over a very quarrelsome insurgency which, now in his absence, may well fall into irreconcilable internal disputes? Third, how did the Taliban hold his death so closely for so long? The answer to the third question lies in the sheer fact of the second: since he never communicated directly with his followers, almost any directive attributed to him was as authoritative as the next. But since there are contending factions and policy differences within the Taliban, why did none of the factions “call out” any of these declarations?

All of these questions will be fodder for discussion and analysis. Perhaps most disturbing, however, is once again, the relation between the government of Pakistan and the government of the United States. The poisonous atmosphere between the two is likely to receive another dose of venom. Already there were accusations by the United States about Osama bin Laden: that Pakistan, if not exactly a formal ally then at least a recipient of millions of dollars of military and non-military assistance from the United States, knew that Osama bin Laden was living in Abbottabad, Pakistan a few hundred meters from the Pakistan Military Academy (Pakistan’s Sandhurst). And that he could not have been living there without the knowledge, and probably complicity, of the government of Pakistan, or at least of the Army and the Inter-Service Intelligence (ISI) directorate. In other words, Pakistan had actively harbored one of the most sought after individual nemeses of the United States, a man with a $10 million bounty on his head.

So there are two possibilities. Either the ISI and the Pakistanis did share their intelligence with the United States, which chose not to act on it. Or the United States was, again, blinded by an erstwhile partner.

The former is not impossible but is extremely unlikely. It might have been in the interest of the United States to pretend that the Taliban was cohesive and well-led so that peace negotiations could be conducted with the adversary which, in turn, could deliver on a final agreement. Incongruously, the government of Afghanistan, especially former president Hamid Karzai, constantly accused the United States of undermining negotiations presumably to keep the war going and the coalition troops in Afghanistan, all the while complaining about President Obama’s plans for reductions in force. But Karzai has clearly bordered on psychotic delusions from time to time, maybe even regularly, and was clearly paranoid. The United States has been trying, at least under President Obama, to leave Afghanistan and reduce its commitments there. At times, certainly the United States did not favor negotiations with the Taliban. In particular, during the George W. Bush administration, U.S. military and civilian leaders did not want to negotiate with the Taliban except from a position of strength and without any pre-conditions about a withdrawal. But, even under that policy, no U.S. leaders would have proposed to support internal Taliban coherence. If anything the United States would gladly have exposed Taliban divisions, sought to exacerbate them, and tried to take advantage of them.

Perhaps the Obama administration, which has wanted to negotiate with the Taliban, would have preferred to reinforce the solidarity of the Taliban in order to gain a credible negotiating partner and agreement. If so, it will now have much to answer for if the story about Panetta’s meeting with Gilani (and many similar ones) was a ruse, and that Mullah Omar’s death has been well-known to the U.S. government and corroborated for some 30 months.

By far the simplest, most parsimonious, most probable explanation for this bewildering intelligence gap is that the Pakistanis knew and simply dissembled. At the very least, they knew and failed to inform or acknowledge, and at worst they denied when asked. (If the military knew and failed to inform its nominally civilian superiors, that would be even more troubling, but not unprecedented.) Why U.S. intelligence wasn’t able to pierce that prevarication is another matter, one which will no doubt be the subject of Congressional and certainly press inquiry. But if the simple answer is the right one, it would amount to just the newest example of Pakistani deception and render serious partnership even more improbable and, without a fundamental change, probably unwise. Serious partnership, based on mutual trust, may not be possible, but the stakes in Pakistan are too high simply to ignore it out of pique: a nuclear state which has already disseminated nuclear plans and weapons; a state at last grappling with its internal terrorists and violent extremists; and a state tottering on the edge of environmental, social, economic, and political implosions. Some kind of verifiable relationship, based on transactions more than trust will need to remain the modus operandi between the two countries.

Gerald F. (“Jerry”) Hyman has been Senior Advisor at the Center for Strategic and International Studies and the President of its Hills Program on Governance since 2007. From 2002 to 2007, he was the director of the U.S. Agency for International Development’s global Office of Democracy and Governance a senior management position. Between 1990 and 2002, he held a number of posts at USAID dealing with democracy and governance, including (from 2001 to 2002) a USAID Senior Management Group position as director of the Office of Democracy, Governance and Social Transitions in the Bureau for Europe and Eurasia. Dr. Hyman developed the programming strategy paradigm for USAID democracy and governance assistance.