Is India About to Give Up on Building Stealth Fighters with Russia? 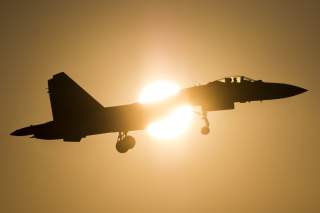 India’s Air Force is pushing the government to abandon a massive deal with Russia for a fifth-generation fighter aircraft, citing its inferiority to America’s F-35 Joint Strike Fighter.

This week, Defense News reported that the Indian Air Force (IAF) has been pushing back against the proposed nearly $10 billion agreement for India and Russia to jointly develop and produce a fifth-generation fighter aircraft, or FGFA. A senior IAF official told Defense News, “IAF is not keen to continue with the program,” adding that the service had raised its concern with the Ministry of Defense.

The article lists a number of IAF concerns. First among them is that the Air Force believes the plane’s stealth and cross-section features are inferior to America’s F-35. Another concern, according to the article, is that the FGFA “does not have modular engine concept, making maintenance and serviceability of the fleet expensive and troublesome.” A second IAF official explained that the lack of a modular engine would prevent India’s Air Force from repairing planes in-house. Instead, servicing would have to be performed by the manufacturer. Previously, IAF sources have complained about the high maintenance costs of the Su-30 planes India purchased from Russia.

This is not the first time the IAF has expressed opposition to the bilateral agreement, which has India procuring between 120 and 130 planes. Just last month, an Indian media outlet published a report citing IAF complaints about the expected cost of the aircraft.

“Sources said the investment of $6.7 billion (Rs 44,800 crore) would give India only four prototypes of the FGFA aircraft and it will have to pay another $135 million (Rs 900 crore) each for the 127 planes, which would be ready for induction only after 2027–28,” India Today reported in September. “The cost per aircraft at the time of delivery in 2027–28, due to high inflation in defense deals, would come around $250 million bringing the total project value to around $32 billion (Rs 2 lakh crore).”

India’s Air Force’s opposition is not the only issue holding up the agreement. The two countries have also clashed over the issue of sensitive technology transfers from Russia to India. As the Diplomat reported in March of this year: “India wants a guarantee that [it] will be able to upgrade the fighter jet in the future without Russian support, which would require Moscow sharing source codes (sensitive computer code that controls the fighter jet’s various systems — the key to an aircraft’s electronic brains). In addition, the FGFA should directly support India’s advanced medium combat aircraft (AMCA) program—a separate Indian fifth generation fighter project.” One Indian official has called the last demand “mandatory.” Another issue, although one that appears to be resolved, is over how many planes each side will buy for their own armed forces.

Still, there are signs for continued support for the deal from both sides. For instance, in February of this year, the Hindustan Times reported that the Ministry of Defense established a panel to review the FGFA program and offer up recommendations. In August, it was reported that the four-person panel “strongly recommended” moving forward with the program. After the Defense News report was published this week, Russia's official arms exporter, Rosoboronexport, put out a statement saying that both countries remain committed to developing the FGFA. “Currently, the Russian-Indian inter-governmental agreement is in effect; there are commitments, under which the parties are implementing the joint project for developing the 5th-generation plane in accordance with the agreed stages and time limits,” Rosoboronexport said, according to Russian media.

The FGFA program dates back to 2007, when India and Russia signed an agreement to explore jointly developing a fifth-generation aircraft. Three years later, the two countries reached an agreement to spend $295 million for a preliminary design of the jet. The project stalled after that phase, however, until reports last spring suggested that the two sides could reach an agreement to each invest $4 billion to complete the final phase of the plane’s development. The increasingly vocal opposition from India’s Air Force is likely an attempt to prevent that deal from ever coming to fruition.

If the two sides decide to move forward, the plan is for the FGFA to be based on the Sukhoi Su-57, Moscow’s first fifth-generation aircraft. As Franz-Stefan Gady has explained, “The Sukhoi Su-57 is a fifth-generation multirole, single seat, twin-engine air superiority/deep air support fighter intended to replace the Russian Air Force’s fleet of MiG-29 and Su-27. The Su-57 will be armed with beyond visual range air-to-air missiles as well as of air-to-ground missiles including the extended range Kh-35UE tactical cruise missile.”

Russian media have explained that the FGFA itself will be modified to meet India’s technical needs. This likely will include enabling it to carry Indian-origin weaponry. In addition, Tass has reportedd the modifications will include “the design and development of a two-seater version of the aircraft, the integration of an advanced engine with increased thrust are planned at the request of India.” Russian media have also said that after India purchases the jet, it could be exported to other countries.