Is India About to Lease Russia's Best Nuclear Submarine Ever? 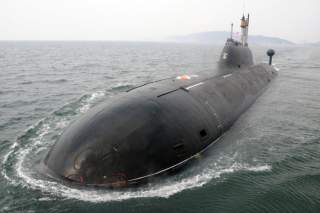 Is Russia considering leasing one of its most advanced nuclear-powered attack submarines to India?

According to state-run Russian media outlet Sputnik, a high-level Indian delegation is expected to sign an agreement to lease a Project 885 Yasen-class SSGN to New Delhi in the near future. However, Russia currently only has one Yasen-class boat in service— K-560 Severodvinsk. Russia has started construction on five additional Project 885M submarines, but those boats are not expected to be completed anytime in the near future.

But is there a realistic chance that Russia would lease its most capable nuclear attack submarines to India? Analysts specializing in Russian military affairs say that there have been rumors of exactly such an eventuality floating around for months, but the chances of such a deal being finalized are probably fairly remote.

“I have heard rumors to this effect for several months,” Dmitry Gorenburg, a senior research scientist specializing in Russian military affairs at the Center for Naval Analyses, told The National Interest. “The main problem, it seems to me, is that it would delay the construction of Yasens for the Russian fleet. Makes me a little doubtful that it would come to pass, unless the Indians are willing to wait for a number of years.”

Severodvinsk and her sister ships—which are still in construction—are the most capable submarines that Russia—or the Soviet Union before it—have ever built. The submarines are fast, deep diving, heavily armed and are extremely quiet according to U.S. Navy sources. Moreover, the new vessels are equipped with a spherical bow sonar array—which addresses one of the major weak points of previous Russian and Soviet submarine design. Indeed, U.S. Navy officials have publicly stated how impressed they are with the Yasen-class on a number of different occasions.

“It’s a very impressive submarine,” Vice Adm. James G. Foggo III, who is simultaneously commander of the U.S. Navy’s 6th Fleet, Joint Force Maritime Component Commander Europe and NATO’s Naval Striking and Support Forces NATO, told The National Interest earlier this year. “If you look across the design of the Russian Federation Navy, where they have put their resources and their research and development efforts has primarily been in the undersea domain and in the submarine force.”

But the problem for Moscow is that while Severodvinsk and her sisters offer performance comparable to (but not quite matching) the U.S. Navy’s Seawolf-class, the roughly 13,000-ton boats are extraordinarily expensive. The first boat cost roughly $1.5 billion while the second Yasen—called Kazan, which is a modernized design—is likely to cost even more by the time it is completed. Moreover, construction is proceeding slowly with each new Project 885M boat taking years to complete. Thus, there are doubts that Russia will be able to afford all eight Yasens that are currently planned—and that might be where India comes in.

“Five are currently under construction in addition to the Severodvinsk. One more is expected to be laid down next summer,” Gorenburg said. “So they're certainly acting like they will build all eight. Though it will take a long time, and maybe they'll lease one or more to India along the way, if the rumors are to be believed. I have some doubts about the likelihood of the deal going through.”

Gorenburg’s doubts are not unfounded. RIA Novosti—which is the main Russian-language edition of Sputnik—reports that while New Delhi is interested in leasing the much more advanced Yasen, Moscow has offered India a second Project 971 Shchuka-B-class (NATO: Akula II) submarine to complement the INS Chakra—which was called K-152 Nerpa in Russian service before it was leased to the Indians in 2012. The Russian reasoning is that it will be too difficult for the Indians to operate multiple types of nuclear attack submarines.

As it currently stands, the Russians expect that President Vladimir Putin will sign a contract with Indian Prime Minister Narendra Modi to lease a second Project 971 Shchuka-B-class attack submarine when he visits India in October. Meanwhile, Sputnik also reported that the submarine leasing deal might pave the way for Russia to help India develop and build six new indigenous nuclear attack boats. However, there is not currently enough information to assess if such a collaboration is a realistic possibility. “I'm not sure on that,” Gorenburg said. “It's possible, but I don't think I have enough information to assess the likelihood of them agreeing to that.”