India and China Are Building up Their Air Power on the Border. What Happens Next? 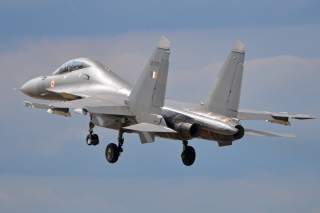 China and India are engaging in an air force buildup along their shared border.

This week, Chinese state media outlet Global Times reported that Beijing has been deploying more advanced jets along its border with India. “China is upgrading its Western Theater Command in order to confront any threat from India,” the Global Times reported, citing images posted by the People’s Liberation Army (PLA). “The pictures posted on the English version of the PLA website show a J-10 fighter jet and J-11 fighter jets conducting aerial combat training exercises in Western China on February 13.”

According to the article, the J-10 and J-11 fighter jets were part of an air brigade assigned to China’s Western Theater Command. It went on to quote a military expert, Song Zhongping, as saying that the PLA views stationing more advanced fighters along the Indian border as an “urgent” task. That is because, as Song pointed out, India itself has been deploying more advanced jets alongside its own border with India. “With India importing new jets, China will continue strengthening its fighter jets in the Western Theatre Command,” Song said.

It is unclear what planes Song is referring to exactly. After the Indo-Chinese military standoff at Doklam last year, satellite imagery from the geostrategic consulting firm Stratfor showed that India had augmented its air force along the border with Russian jets. According to Stratfor, two air bases on the Indian side of the border, the Siliguri Bagdogra air base and the Hasimara Air Force Station, had previously been home to transport helicopters and the MiG-27ML ground attack aircraft. They are now hosting Su-30MKI warplanes. As Stratfor pointed out: “The Su-30MKI is India’s premier fighter jet, and it will soon be capable of striking land targets with the advanced BrahMos cruise missile.”

Song might have also been referring to the Rafale fighter jet that India is purchasing from France. In September 2016, Delhi and Paris inked an $8.7 billion deal for India to purchase thirty-six Rafale planes from France. All of the planes are expected to be delivered by 2022, but some of them will be available much sooner. Indian media reports have said that half of those planes will be stationed at Hasimara Air Force Station near China, while the other half will be closer to Pakistan. According to these media stories, Indian military officials believe the Rafales are especially needed on the Chinese border because of their long-range strike capabilities.

India’s moves notwithstanding, Stratfor noted that the buildup was even greater on the Chinese side of the border, including a new air strip at a base near Shigatse. “A new runaway was constructed by mid-December, nine aircraft aprons measuring 41 meters by 70 meters were built along the main taxiway and eight helipads were set up in the northeast corner of the airfield. This construction, along with the deployment of new equipment in greater numbers, highlights how China has undertaken a serious effort to improve its capabilities close to” the border with India.

The Chinese-Indian border is difficult terrain for aircraft to operate in because of its high altitude and extreme weather patterns. More advanced aircraft will help overcome these factors, although better training is also necessary. “China also needs to constantly train pilots and prepare them for high altitudes, and improve cooperation between the support team on the ground and pilots to make sure performance isn’t affected” in the difficult conditions, said Song, the Chinese military expert, to the Hong Kong–based South China Morning Post.

The 3,500-kilometer (2,174-mile) border between India and China has long been a source of tension between the two neighbors, and Delhi and Beijing fought a brief war over the border in October 1962. There have been periodic flare ups ever since. Still, last year’s Doklam crisis was especially intense. As Jeff Smith put it at the time, “While stare-downs at the disputed China-India border are a common affair, the episode now underway is an altogether different, potentially far more dangerous, beast.” The row began when it was discovered that China was attempting to build a new road through a disputed plateau that India refers to as Doklam and China calls Donglang. Sovereignty over the area is in fact disputed by China and Bhutan (an Indian ally), rather than Delhi itself.

India sent troops to the area ostensibly to support Bhutan. Likely more pressing for Delhi, however, was its concerns that the new road would allow China to cut off most of India from its remote northeastern states. A similar fear (albeit in a different area) was behind the Kargil Crisis between India and Pakistan in 1999. For two months during the Doklam crisis, neither Beijing nor Delhi would agree to stand down, and both sides issued escalatory threats. Eventually, the crisis flamed out in August of last year, when India agreed to withdraw its troops from the area. In return, Beijing agreed to halt the road construction for the time being.

The buildup of forces indicates that both sides believe the calm is only temporary. “It’s fairly clear they (the Chinese) are trying to send a message in the post-Doklam period about their resolve to be strong,” Kanti Prasad Bajpai, the director of the Centre on Asia and Globalization at Singapore’s Lee Kuan Yew School of Public Policy, told CNN about the latest Chinese deployments. The same can certainly be said about India.