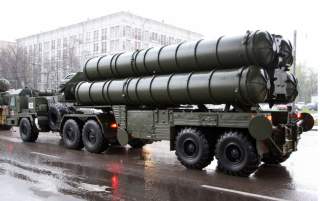 Russia and India signed a major arms deal on the sidelines of the BRICS summit in Goa this past weekend. The deal included four major components.

First, India becomes the second country after China to receive S-400 long-range air defense missiles. The agreement is for Russia to provide either 4 or 5 S-400 battalions to India. (Russian sources report the lower number, while Indian sources went with the higher one.) While a contract has not yet been signed, Russia signed a contract with China in 2014 to export four battalions for approximately $2 billion. The first systems are expected to be delivered in 2020.

Second, the two sides signed an agreement for India to purchase four Project 11356 (Admiral Grigorovich class) frigates. This agreement resolves the saga of the Project 11356 frigates that were originally ordered for Russia’s Black Sea Fleet but could not be completed after Ukraine refused to provide turbines for the ships in the aftermath of the 2014 conflict in Crimea and Eastern Ukraine. An agreement has been reached for Ukraine to provide the turbines for the ships as long as they are exported to India. According to Alexey Nikolsky of Vedomosti, one of the three ships will be completed at Yantar, while the hulls of the other two will be transferred to India and completed there. In addition, a fourth ship will be built entirely in India. The BMPD blog states that two ships will be completed in Russia and two built in India. It should be noted that India already operates six frigates of this type, which it calls the Talwar class. The total value of this agreement may be around $3 billion, which may include Russian assistance in the modernization of the HSL shipyard in India.

Third, the two sides signed an agreement for India to lease an inactive Akula-class multi-purpose nuclear submarine. India is already leasing a submarine of this class from Russia, the INS Chakra (formerly known as the Nerpa), which has been in the Indian Navy since 2012. Although the specific submarine to be leased was not mentioned, Russian contacts report that it is likely to be one of the Northern Fleet submarines currently being overhauled at Zvezdochka (Samara or Bratsk), rather than the hull that has been sitting incomplete at the Amur shipyard since the mid-1990s and has in the past been mentioned as a possible candidate for leasing to India. The agreement noted that the submarine is expected to be refurbished and modernized prior to transfer. Given the Indian Navy’s experience with the modernization of the INS Vikramaditya, I wonder what provisions about delays and cost overruns the Indian side will include in the contract.

This agreement signals that India has given up on leasing or buying a Yasen-class submarine. As I have indicated previously, Russia was most likely unwilling to provide its most advanced submarine to India, either because of its capabilities or because constraints on the number of Yasen-class submarines that can be built in Russia would mean that providing such a submarine to India would result in delays in the procurement of Yasen submarines for the Russian Navy.

According to Konstantin Makienko of CAST, the total value of these four agreements is likely to substantially exceed $6 billion. The agreements show that although India has sought to diversify its suppliers for military equipment, it will continue to have a strong relationship with Russia in this field, particularly when it comes to hardware that it cannot receive from other suppliers (such as nuclear submarines and long-range air defense missiles).