Is India Getting Ready to Build Its Own Stealth Fighter? 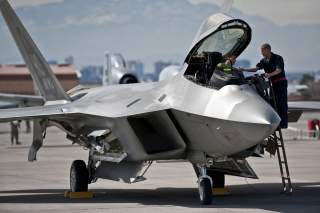 In 2008, India’s Aeronautical Development Agency began developing a multirole fighter to replace its large fleet of aging Jaguar, Mirage and MiG-23 fighters. The new project was tentatively dubbed the Medium Combat Aircraft (later revised to the Advanced MCA, or AMCA), to be produced domestically by Hindustan Aeronautics Limited. Shortly afterwards, the Indian Air Force put in a serious addendum to the program: they wanted AMCA to be a stealth fighter, too.

For a while the AMCA project slowed down, as India invested $5 billion in the Russian Sukhoi PAK FA stealth fighter, intending to produce its own version called the FGFA. But then the PAK FA program began to suffer major setback, eliciting numerous complaints from the Indian military. Now, even Russia has only ordered production of twelve of the supermaneuverable stealth aircraft, and the future of the FGFA is unclear.

New Delhi’s interest in the HAL AMCA therefore kicked back into higher gear, with more than four thousand staff devoted to the project, according to a report in 2015. By then, the ADA had settled upon a final design involving a twin-engine, canted twin-tail configuration, with an overall profile similar to that of the American F-22 Raptor. Mock-ups of this design have already reportedly undergone wind-tunnel and radar cross-section tests.

The AMCA is slated to use three-dimensional thrust-vector engines—a design element found in the Russian PAK FA and Su-35—which allow for supermaneuverability (superior pitch and yaw performance), especially at lower speeds. These engines are intended to generate enough thrust so that the AMCA can supercruise—that is, sustain flight above the speed of sound without resorting to fuel-gulping afterburners—and should be able to attain a maximum speed of Mach 2.5 with the burners engaged. The AMCA is intended to be made largely out of lightweight carbon fiber and titanium alloys to facilitate those high speeds, as well as a planned range of around one thousand miles.

The AMCA’s internal weapons bay would conceal up to four munitions for stealth missions. At least eight more weapons could be carried under the fuselage and wings for missions in which stealth is not a requirement. The weapons would likely compromise a mix of domestic, Russian and Israeli missiles.

Sensors would include a cutting-edge Active Electronically Scanned Array (AESA) radar, which offers greater stealth and superior resolution, as well as multiple Infrared Search and Track sensors offering full spectrum coverage around the airplane. The AMCA would also come with sophisticated data links to network its sensor data with friendly platforms, and a self-defense jammer of the sort found on Russian combat aircraft.

The next step in the development process, however, may prove more challenging: India must develop the key components to fit the schematics drafted by the ADA.

First of all, India must find a way to develop and manufacture radar-absorbent materials (RAM), as well as the precision-manufacturing capabilities to create a stealthy hull. A protruding screw or a poorly fit metal plate can cause a stealth aircraft’s radar cross-section to blossom, so a high-fidelity manufacturing process is a must. Indian hopes to acquire radar-absorbent materials from France as part of a deal to purchase Rafale fighters have fallen through.

Second, there is the requirement for a domestically produced AESA radar. Currently India is using Israeli AESA radars in its Tejas fighter. However, the Indian Electronics and Radar Development Establishment has been working on a solid-state Gallium-Nitride radar since 2012.

Finally, the ADA and HAL will need to produce sufficiently powerful turbofan engines to meet performance specifications. This is further complicated by the need for an S-shaped air intake that will shield the reflective turbofan blades from showing up on radar, as well as specially designed nozzles to reduce the heat signature of the engines from infrared sensors.

In theory the AMCA will be powered by a domestically manufactured Kaveri K9 or K10 engine, currently undergoing development by the Gas Turbine Research Establishment. But making powerful and reliable jet engines from scratch is hard—China has struggled to build a reliable domestic turbofan for its J-11B fighter, despite the considerable resources at Beijing’s disposal. Only after the Kaveri engines are ready, supposedly in 2019, can the serious work on the airframe really begin.

Therefore, India is looking to foreign manufacturers to assist in developing the engine. New Delhi has received offers from General Electric, Rolls Royce and SNECMA, with GE’s F414 turbofan (used on the U.S. Super Hornet fighter) seen as the most likely candidate. Indeed, there were extensive discussions concerning transferring F414 technology to India entirely in 2016, and in February 2017 a tender was issued in which GE agreed to transfer 50 percent of the F414 technology behind the F414 along with a shipment of engines intended for use on the Tejas fighter. Russian thrust-vectoring technology also seems likely show up in the Kaveri. Nonetheless, the transfer of engine technology is perceived to be a major sticking point in the AMCA program’s advancement.

Some observers are skeptical that the AMCA project will yield much in the way of results. HAL has manufactured two other jet fighters over the last half century, neither of which has proven a tremendous success.

The HF-24 Marut fighter bomber, which entered service in the late 1960s, disappointed due to its inability to attain supersonic speeds as intended; furthermore, it was manufactured at greater cost than higher-performing foreign designs. Despite chalking up a decent record in actual combat with Pakistani forces in 1971, the Marut was withdrawn from service in 1990, with many of the airframes having spent limited time in the air.

Then there is the delta-wing Tejas light fighter, which spent thirty-three years in development, only to demonstrate such underwhelming performance that the Indian Navy canceled its plans to purchase it after trials. Though a few hundred Tejas fighters will enter service with the Indian Air Force, the troubled program, which relies heavily on imported parts, does not amount to an encouraging example. Intriguingly, a new version of the Tejas using the F414 engine is currently under development.

Of course, the only way to get good at the difficult tasks like building jet fighters—or even harder stealth fighters—is to invest long-term in developing the technical know-how and the prerequisite production facilities, without expecting succeed at everything immediately. Indeed, ADA chief C. D. Balaji recently told Flight Global that a flying AMCA prototype was not projected until 2025.

On paper, the AMCA actually appears fairly promising, and real resources have been invested in its conception. However, to make it a reality, Indian engineers will need to work hard to develop the necessary radar, engine and RAM technologies to realize the design’s promise.