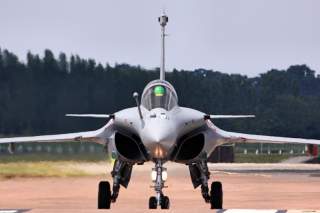 France’s recent arms sale to India is not in itself a game changer in South Asia’s balance of power, but, coupled with the United States’ decision to cut military assistance to Pakistan (Delhi’s arch rival), it is doomed to produce some aftershocks in the region’s defense dynamics.

India secured 36 Rafale multi-role fighters from France’s aircraft manufacturer Dassault Aviation; an $8.8 billion deal was signed by French Defense Minister Jean-Yves Le Drian and his Indian counterpart Manohar Parrikar on September 23, after almost 18 months of quarrels over the contract terms. The first delivery is expected by September 2019 and all jet fighters will be at disposal of the Indian Air Force (IAF) within six years. It took 16 years for an Indian government to fulfil the commitment to reinforcing the national air force with new generation fighters.

The new arms sale arrangement highlights a breakthrough in the Indo-French defense relationships. Apart from Delhi-Paris joint cooperation to manufacture six Scorpene submarines, from 2000 to 2015 France provided India with military items worth $715 million, as opposed to $966 million in military goods that Pakistan bought from French defense producers. It is worth saying that between 2011 and 2015, Islamabad received only $24 million in military-related supplies from France, the Stockholm International Peace Research Institute (SIPRI) reports, signaling a shift in the French defense manufacturers’ business opportunities from Islamabad to Delhi.

A Valuable Asset Against Pakistan?:

The nuclear-capable Rafale can mount 150-km range Meteor air-to-air missiles and 300-km Scalp air-to-ground cruise missiles. Some Indian observers view Rafale’s capabilities as a combat advantage over Pakistan’s F-16 jets, at a time when tensions between Delhi and Islamabad over the disputed Himalayan territory of Kashmir have again reached boiling point as a result of the armed raid on the Indian military outpost in Uri on September 18 and the subsequent “surgical strikes’ by the Indian armed forces on terrorist launch pads across the line of control in Pakistan-occupied Kashmir.

Rafale fighter jets will be modified to meet specific Indian demands. As part of the deal, Dassault will provide a weapons package and reinvest 50% of the value of the contract in India, with the participation of indigenous enterprises. Still, the French aviation company is ready to produce Rafales in India in the event Delhi makes a bigger order, declaring that it is committed to Indian Prime Minister Narendra Modi’s “Make in India” project, designed to turn the country into a global manufacturing hub.

Due to the high costs, Rafales’ acquisition has drawn a great deal of criticism in India. Modi’s government has so far rebutted the argument, underlining that it sealed a better agreement than the one the previous United Progressive Alliance (UPA) cabinet had tried to conclude.

Immediately after the announcement of the purchase, the Indian National Congress leadership blasted Modi and his Bharatiya Janata Party. The Indian major opposition force contends that 36 Rafale fighter jets do not serve IAF’s operational needs and that, during its tenure, the Congress-led ruling UPA coalition worked to buy 126 omni-role fighters (including relative technology), the minimum number for IAF’s requirements.

The IAF would need 42 fighter squadrons to counter threats from Pakistan and China, according to Congress top brass and former Defense minister AK Antony. In his estimate, Delhi’s air force has now only 32 squadrons up and running and, without new inductions, they will drop to 25 by 2022. By and large, Antony’s figures match those of many military analysts – 42 to 45 squadrons of fighters as an optimal level and 32 to 33 the current Indian fleet’s size.

In the past months, the Pakistani government has stressed that its air force would have to retire 190 planes by 2020. That will prompt Islamabad to buy new fighters, if it wants to maintain the current level of 350 to 400 aircraft and try to catch up with India’s fresh acquisitions.

The US Senate blocked a deal for eight F-16 Block-52 fighter aircraft with Pakistan in May and refused $300 million in defense aid to Islamabad in August. Many congressmen in Capitol Hill think that Islamabad is an unreliable ally in the war against terrorist organizations operating on the Pakistani soil and in Afghanistan.

Without the US-made F-16s, and in general with reduced political and financial cover from Washington, Pakistan will have to turn either to Russia for its Sukhoi Su-35 or to China for its J-20 stealth fighter (which is still under development) and Chengdu J-10 to modernize its jets fleet with better aircraft; unless logistical and financial hurdles push the Pakistani Air Force (PAF) to veer to fighters of inferior caliber, like it already did with the procurement of used F-16s from Jordan in the past.

France is yet another option for the PAF, but it remains to be seen whether, in the presence of a relative tender or request from Islamabad, Paris wants to incur Delhi’s inevitable displeasure and thus jeopardize potential military agreements with the Indians that are already in the offing, not least possible new orders of Rafales for the IAF.