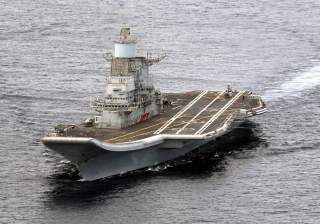 India’s first homegrown aircraft carrier will join the navy by the end of 2020, according to the country’s top naval officer.

At his annual press conference ahead of India’s Navy Day on December 4, navy chief Adm. Sunil Lanba revealed: “Work on Indigenous Aircraft Carrier, IAC 1, is progressing well and I am hopeful that the ship would join the Navy by 2020.”

India’s homegrown aircraft carrier, which is called the INS Vikrant, has been a long time in the making. Construction of the ship first began around the turn of the century but it has suffered repeated delays. Although the carrier enjoyed a “soft” launch in 2013, it wasn’t officially launched until about two years after that. Even after that officially launching, construction has continued.

Around the time of the 2015 launching, Indian media reports suggested the INS Vikrant would join the navy as early as 2017 or 2018. I expressed skepticism about this back then, noting,“given India’s defense procurement history, including that of its Indigenous Aircraft Carrier (IAC) project, one should expect this deadline to ultimately be missed.” The 2020 deadline is no sure thing either, although it is slightly more realistic than the original 2017 one.

Whenever it joins the navy, the carrier will be a significant boost to India’s naval power. The INS Vikrant weighs 40,000-tons, with a length of 260 meters and a width of 60 meters. Earlier this year, a reporter from The Hindu who toured the ship quoted one of the shipyard’s supervisors as saying the carrier has “14 decks in all, including five in the superstructure,” Earlier Indian media reports had said: “It has two take-off runways and a landing strip with three arrester wires, capable of operating STOBAR [Short-takeoff-but arrested recovery] aircraft including the indigenous LCA, as well as a range of helicopters with hangar facilities.”

The ship will be powered by four GE LM2500+ gas turbines using a combined gas and gas configuration, according to IHS Jane’s. Italy’s aircraft carrier, the ITS Cavour, also uses four LM2500+ gas turbines as part of its propulsion system. Diesel generators will provide electricity to the ship and power the weapon systems of the INS Vikrant.

To provide the ship’s punch, the Indian navy began soliciting bids from international firms for fifty-seven carrier-based aircraft in January of this year. The detailed proposal released stated that New Delhi was looking for planes that were “capable of operations during day and night, and in all weather conditions; and be suitable for shipborne air defense, air-to-surface, ‘buddy-buddy’ aerial refueling, reconnaissance, electronic warfare, and other unspecified roles.” India reportedly received offers for American F-18 Hornets, French Rafales, Swedish Sea Gripens and Russian MiG-29Ks. India’s navy already operate MiG-29Ks although it recently expressed displeasure with them. Delhi also concluded a deal with France last year to purchase thirty-six land-based Rafales. At the press conference, Admiral Lanba said he expected a decision on which plane India will purchase to be made by the middle of 2018. The original request for information New Delhi issued in January said that the winning bidder should begin delivering planes three years after the contract is signed and all the aircraft should be in India within six years. This also suggests the indigenous carrier might miss the 2020 deadline, although New Delhi could use its existing MiG-29Ks.

The INS Vikrant will be the first of two aircraft carriers India is building domestically, with the latter one being much larger and more advanced. Admiral Lanba discussed this second carrier during his press conference, according to local media reports. “We have analyzed it, and fixed the form and fit. It is going to be about 65,000 tonnes. It will have catapult-assisted take-off and arrestor recovery,” the naval chief said. He added: “It will be conventionally powered and we are going through the process of taking it to the (Defense) Ministry.”

As I previously noted, India and the United States are in discussions for Washington to equip India’s second homegrown aircraft carrier with electromagnetic aircraft launch systems (EMALS). EMALS, which are built by General Atomics, are the most advanced launch systems in the world, and are used by America’s new Ford-class carriers.

India’s navy already has experience operating aircraft carriers. It has previously operated two former English aircraft carriers, starting in 1961. The second one of these wasn’t decommissioned until earlier this year. Moreover, New Delhi operates the INS Vikramaditya, a refurbished Kiev-class carrier it purchased from Russia for $2.35 billion. The 44,400-ton INS Vikramaditya was commissioned in Russia in 2013, and formally inducted into the Indian navy back in June of 2014.