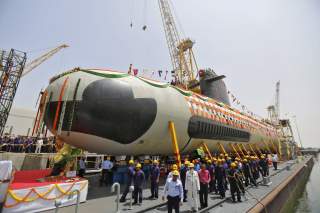 India’s first nuclear-powered ballistic missile submarine (SSBN) appears to have suffered from an accident that has knocked the boat out of commission for the past 10 months.

The vessel propulsion compartments were flooded with seawater due to what appears to have been human error. According to the Indian newspaper The Hindu, a hatch on the port side of the vessel was left open by accident while Arihant was still in port. Water apparently entered the vessel when it set sail.

As the lead boat of a new class of submarines and as New Delhi’s first attempt at building an SSBN, Arihant has had its share of problems. Senior Indian Navy sources told The Hindu that Arihant has faced problems from the beginning partly because of “major differences between the Russian-supplied design and indigenous fabrication are said to have left many issues unaddressed satisfactorily.”

However, this latest accident does not have anything to do with design flaws or manufacturing defects. The problem in this case is simple negligence—a hatch being left open.

The Indian submarine fleet has a long history of serious accidents. Indeed, in recent months, INS Chakra, Project 971 Akula-class nuclear attack submarine leased from the Russian Federation, suffered damage to its sonar dome in October. Since 2008, the Indian Navy’s submarine force has suffered at least three serious accidents, two of which resulted in serious loss of life.

It is not yet clear if the accident onboard Arihant will seriously impact the developmental progress of India’s submarine-based nuclear deterrent. A second SSBN called Arighat was launched on November 19 earlier this year. That vessel is apparently conducting sea trials according to The Hindu.

The Indians plan to build three additional Arihant-class vessels for India’s retaliatory second-strike capability. However, Arihant has apparently proven to be far more expensive than anticipated—and technologically far more troublesome than expected. Indeed, the vessel has been in development for more than 30 years.

“It was initially estimated to cost about ₹3000 crore [crore=10 million] for three boats — now the cost of Arihant itself seems to have gone over ₹14,000 crore,” a former high-ranking naval officer told The Hindu.

The vessels are expensive, but it seems likely that New Delhi will continue on its path to develop a survivable submarine-based deterrent. With hostile nuclear-armed China and Pakistan next door, India has little choice but to persist with the development program despite its exorbitant cost.