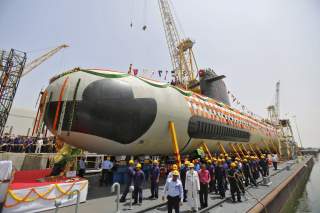 The Indian Navy will launch its second homegrown nuclear-powered submarine within the next month, according to local media outlets.

This week, India’s Economic Times reported, citing government sources, that the second indigenous nuclear submarine will be transferred to water sometime in later September or early October. At that time, the INS Aridhaman will undergo extensive sea tests over the next two years before being inducted into the Indian Navy at some point in 2019.

The launch of the INS Aridhaman follows India’s first domestically built nuclear-powered ballistic missile submarine (SSBN), the IHS Arihant, being inducted into the Indian Navy in August of last year. That submarine made India only the sixth country after the United States, Russia, the United Kingdom, France and China to build a SSBN. The first Indian SSBN is believed to carry twelve Sagarika (K-15) submarine launched ballistic missiles (SLBMs) that have ranges of 700 km. However, India’s Defence Research and Development Organisation (DRDO) is also developing a longer-range SLBM, the K-4, which its SSBNs will also carry. The IHS Arihant is only equipped to handle four of the larger K-4s (the submarine has four launch tubes but three K-15s can fit in each launch tube). The submarine can also carry torpedoes and submarine launched cruise missiles (SLCMs), including possibly a sea-launched version of the BrahMos.

The IHS Arihant was built primarily to serve as a trainer. That is, to train sailors to operate the new Arihant-class submarines, of which Delhi plans to build four boats. Thus, the new INS Aridhaman will pack a lot more firepower than its sister ship. According to the Economic Times, the second SSBN has eight vertical launch tubes, allowing it to carry twenty-four K-15 missiles or eight K-4 missiles. In addition, the new boat will have a reactor more powerful than the INS Arihant’s 83 MW pressurised light-water reactor. That reactor uses uranium as fuel and light water as a coolant and moderator, which allow it to operate quietly and stay submerged for about two months at a time. The new SSBN will be able to travel at speeds of 24 knots when submerged.

While technically an indigenous boat, the Arihant-class submarines are based on the designs of the Russian Project 971 Akula I-class nuclear-powered attack submarines. India has leased the Akula I-class SSN from Russia in the past. Still, the launching of the first nontrainer SSBN is a significant milestone for India’s Navy. As I’ve noted before, India’s quest to build a nuclear-powered ballistic missile submarine reportedly began in 1970 under Prime Minister Indira Gandhi. Code-named the Advanced Technology Vehicle (ATV) program, its existence was kept under wraps for more than three decades ago before the former chairman of India's Atomic Energy Commission, PK Iyengar, revealed it at a public forum back in 2007.

The SSBNs will give India a complete nuclear triad, which consists of land, air, and sea-based nuclear delivery systems. In one sense, this could seen as a good development for strategic stability in the region as submarines out at sea are far less vulnerable to surprise attacks compared with airplanes and land-based missiles. This is especially critical for a country like India which maintains a modest-sized nuclear arsenal.

At the same time, the new leg of the triad could produce a sea change in India’s nuclear operating procedures. As a country with a no-first use declaratory policy, India’s current nuclear warheads and missiles are kept demated and likely in separate locations. This is fine for the air and land-based legs of the triad because they can be brought together if needed. This is not possible for SSBNs. To provide any deterrent benefit, the missiles and warheads will need to be kept together on the submarines, eliminating any actual demonstration of its no first use policy beyond words. This is a challenge that is also being confronted by China, another country with a no-first use policy that also recently began deterrent patrols.

Questions will inevitably be raised about the security of hosting nuclear weapons on Indian ships as the country’s navy, and submarine fleet in particular, has suffered from a number of mishaps in recent years. Most notably, an explosion on the Russian-built INS Sindhurakshak submarine sunk the ship and killed eighteen sailors in 2013. The next year, there was a fire on another submarine, the INS Sindhuratna, which killed two people. A report by the Comptroller and Auditor General’s latter blamed crew fatigue and outdated ammunition as the causes of these incidents.

The emergence of India’s SSBNs is another example of a growing technological arms race among the so-called nuclear triangle of China, India and Pakistan. In 2012, India first tested its Agni-V intermediate ballistic missile, which is capable of reaching all parts of China. As alluded to above, China also recently acquired its first operational SSBNs, which began conducting deterrent patrols sometime in 2016. China also recently began deploying multiple independently targetable reentry vehicle (MIRVs) on its ballistic missiles, a step India is also likely to take if it already hasn’t. Both India and China have also been improving their targeting capabilities through improved intelligence surveillance and reconnaissance (ISR) capabilities. On the other hand, Pakistan has been focusing on building up a large tactical nuclear weapon arsenal to repeal any Indian conventional attacks.