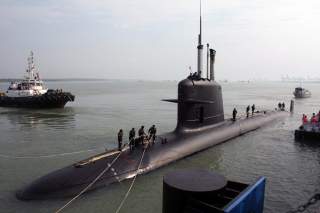 On January 31, India launched INS Karanj at a naval dock in Mumbai. India’s Navy chief, Adm. Sunil Lanba, was on hand to watch the event.

INS Karanj is the third of six Scorpène submarines that India is purchasing form France. Delhi and Paris first inked the agreement for the submarines in 2005, with the first one expected to be delivered in 2012. Instead, delivery was delayed until 2015 and didn’t get commissioned into India’s Navy until December of last year. The second Scorpène was launched in January 2017 and is currently undergoing sea trials. Local media reports say that INS Karanj is also expected to undergo sea trials for roughly a year before being commissioned into India’s navy.

Delhi needs all the submarines it can get. By its own estimates, the Indian Navy needs roughly eighteen conventional attack submarines. Before commissioning the first of the Scorpène submarines in December, India’s navy had thirteen aging ships, only half of which were operational at any one time. By contrast, the country had twenty-one submarines during the 1980s. The decline in India’s undersea fleet is also evident from the fact that, according to the Times of India, Delhi hadn’t commissioned a new attack submarine in seventeen years until the first Scorpène was commissioned in December 2017.

The Indian firm Mazagon Dock Shipbuilders Limited (MDSL) is collaborating with the French company Naval Group (formerly DCNS) in building Delhi’s Scorpène submarines. Each submarine reportedly displaces around 1,500 tons, with a length of sixty-one meters. They boast six 533-millimeter torpedo tubes that can be armed with antiship torpedoes, antiship missiles or sea mines. The Scorpène submarines—which India calls the Kalavri class—are expected to be armed with the SM.39 Exocet underwater-launched antiship missile, which the lead ship, INS Kalvari, flight tested last year. The Exocet has a range of fifty kilometers and can also be fired at lower-than-periscope depths. The Hindu, an Indian newspaper, said the subs are powered by 360 battery cells that each weigh 750 kilograms, with two 1,250 kW MAN diesel engines charging the batteries. They are manned by a crew of forty-three sailors.

It added: “The attack can be launched with both torpedoes and tube launched anti-ship missiles, whilst underwater or on surface. The stealth of this potent platform is enhanced by the special attention given to various signatures. These stealth features give it an invulnerability, unmatched by most submarines.” In addition, the Ministry of Defense said that the subs will be used in a multitude of different missions, including antisurface and antisubmarine warfare, along with intelligence gathering, surveillance and mine laying. The Kalvari-class subs are also able to operate in all different theaters.

One of the primary missions of the new submarines will undoubtedly be to monitor the increased Chinese naval presence in the Indian Ocean. Last July, local media reports, citing Indian naval and defense officials, said that the navy was particularly perturbed at the sight of more Chinese submarines in the waters. While some Chinese warships are expected given Beijing’s participation in anti-piracy missions in the Gulf of Aden, an unnamed Indian naval officer noted: “Chinese submarines have been spotted in the region. Such assets are not used for anti-piracy operations. They are clearly making their presence felt in the region.”

The Scorpène submarine was originally jointly developed by DCNS and the Spanish company Navantia. Other countries that have purchased Scorpène submarines include Chile, Brazil and Malaysia. The 2005 agreement with India was worth $3.75 billion and included technology transfer. As such, the Ministry of Defense portrayed the new submarines as part of Prime Minister Narendra Modi’s “Make in India,” initiative even though the original deal far predated his premiership.

At the ceremony launching the new sub, naval chief Admiral Lanba expressed hope that the earlier delays that plagued the program had been overcome. “MDSL and the Naval Group have put their houses in order and we have seen seen quick launches of the first three boats. I am quite confident that they have learnt from the experience of building and commissioning the first boat. I do not foresee any more delays in the program,” he said. Regarding specific timelines for the three remaining submarines, an unnamed defense official told the Hindu, “The three submarines are in various stages of outfitting. The entire project is expected to be completed by 2020.”