India's Real Military Problem (And It's Not Pakistan or China) 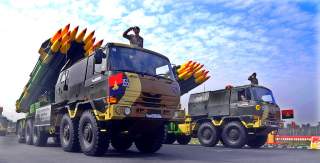 The Indian government has unveiled its budget estimates for the coming fiscal year, with defense once again in line for a 10 percent year-on-year nominal increase. Finance Minister Arun Jaitley delivered the budget 2017 speech on February 1, with the defense outlay estimated at 2.74 trillion rupees ($40.4 billion), minus pensions, which is up from the 2.49 trillion rupees ($36.8 billion) revised allocation for its current fiscal year. India's new fiscal year begins on April 1, 2017, and runs through March 31, 2018.

On its face, the bump in year-to-year defense investment appears a welcoming sign for Indian military modernization, but once the budget estimate curtain is pulled back, the actual picture indicates something more complex.

From a broad perspective, India's military modernization plan reaches across the service spectrum, requiring major capital investments in new hardware for the air, land, sea, surveillance and electronics spheres. It spans from new assault rifles for infantrymen to tactical transport aircraft and landing platform docks. The price tag for all the rearmament requirements under the Ministry of Defence's “Long-Term Integrated Perspective Plan,” which runs through 2027, is more than $230 billion.

Therefore, India will need to allocate around $16 billion per annum toward the capital head portion of the defense budget (funding earmarked for hardware acquisitions) over the coming eleven years, if it intends to meet all of its modernization goals. This funding outline does not take into account the inflationary and currency value fluctuations likely to be encountered across the coming ten-year period. India's Ministry of Defence has yet to fund more than $13.5 billion in capital head expenditure in any given year since the launch of the Long-Term Integrated Perspective Plan in 2012.

For starters, with an election on the horizon in 2019, the current government of Prime Minister Narendra Modi has one more “spare” year to pump extra money into defense before the inevitable election-year turn toward infrastructure and welfare spending in an attempt to appease voters on the electoral margins. Future governments may be less keen on promoting defense expenditure at the expense of other areas, thus rendering any long-term aspirations wobbly from the start.

Second, although India's economy continues to grow, it is not expanding fast enough to underwrite annual capital head defense budget allocations of around 1.08 trillion rupees. This is the minimum required spending level going forward that would enable the Ministry of Defence to maintain pace with modernization funding requirements.

Growth for fiscal year 2016 is already slowing year-on-year by almost 1 percent, partially due to a government demonetization initiative aimed at curbing black-market activity. The Indian economy has expanded by 10 percent of GDP just once in the past twenty years, and forecasts from the International Monetary Fund through 2021 do not project another year of double-digit growth.

Without sizable economic expansion, the government is hindered by revenue intake (allowing for increased expenditure) and political realities. Short of an outbreak of conflict—or the imminent appearance thereof—generating a popular wellspring of support for a massive expansion of the defense budget may prove politically difficult for both current and future governments.

Third, India's defense budget is squeezed by the need to recruit, train, outfit and house a 1.25-million-strong military. On top of that, Indian soldiers allege that they endure poor working conditions and inadequate care, which makes personnel welfare a crucial political component within the defense budget for politicians. Strong upticks in capital expenditure for modernization without commensurate defense budgetary increases would therefore elicit charges of funding a foreign vendor over the welfare of soldiers.

Perhaps even more problematic is the issue of financial mismanagement within the Ministry of Defence. For the past three fiscal cycles, the Indian Ministry of Defence has proven incapable of fully utilizing the tranche of funding provided to it within the capital head portion of its budget. Thus, finalized defense expenditures (the revised estimate) for the past two years resulted in topline figures equaling 95 and 91 percent of the original budget estimate (fiscal years 2014–15 and 2015–16, respectively).

Even worse, much of this unspent funding comes from the capital head—this at a time when India faces technological obsolescence across much of its military's hardware spectrum. In fiscal year 2015–16, the Ministry of Defence only spent 87 percent of its defense equipment budget allocation. It will miss the 100 percent mark again in fiscal year 2016–17, coming in at 91 percent of what had originally been budgeted.

The 10 percent rise in the equipment investment earmark should help defray some of the defense inflation normally incurred in military projects, as well as help cover the direct government-to-government purchase of thirty-six Dassault Rafale combat aircraft from France and part of the $3 billion worth of various missiles, tank engines, rocket launchers and ammunition procured from Russia and Israel to replenish depleted Indian armed forces stocks.

But this still leaves a bevy of expensive, big-ticket projects—many of them pressing, particularly in the areas of combat aircraft, artillery, fixed-wing transports and submarines—to be contracted for and funded.

Thus, India finds itself well behind the rearmament timeline it has fixed for itself, as many of these projects take years just to wind through the labyrinthine defense procurement process and be consummated, let alone be delivered and begin operational use.

More importantly, year-on-year the final defense budget allocation—the revised estimate—comes in lower than the original budget estimate. For example, the fiscal year 2016–17 defense budget estimate figure was 2.58 trillion rupees, which was ultimately revised downward by 3.5 percent to the aforementioned total of 2.49 trillion rupees. This negative trend parallels the steady decline in India's defense investment, minus service pensions, as a share of national wealth. The latest figures show Indian defense budgets at around 1.65 percent of GDP, down from 2.19 percent in 2009–10.

So while India's economy continues to expand, its level of investment in defense is steadily declining. This decoupling comes as China's People's Liberation Army Navy continues to expand its presence in the Indian Ocean region, and Beijing invests in a network of roads, railways and pipelines linking it to India's fiercest rival, Pakistan.

All of this, of course, is fine should India expect its immediate strategic environment to remain calm across the coming decade. But the outbreak of conflict, like economic hiccups, is often unpredictable.

Thus, the picture that emerges from behind the curtain is one far less advantageous than a 10 percent year-on-year increase and one of the world's largest defense budgets would appear to indicate.

Daniel Darling is a senior international military markets analyst for Forecast International, a defense/aerospace market research company located in Newtown, Connecticut. He covers the European and Asia-Pacific Rim markets for Forecast. A graduate of Kansas State University, he has contributed commentary to Defense News, The Diplomat and World Politics Review and he has been quoted, or had his work cited, in the Financial Times, the New York Times, Flight International, Bloomberg, National Defense Magazine, among others.