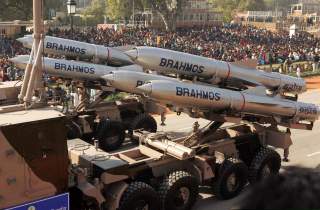 India is preparing to test a new, long-range version of its supersonic BrahMos cruise missile this year, according to local media reports.

On January 20, the Hindustan Times reported India is “laying the groundwork” to test a new 800km version of its BrahMos cruise missile. The test is expected to take place some time in 2018. “It will be a significant leap forward for the BrahMos project. Air force fighters will be able to attack targets from increased standoff ranges,” the report quoted a second source familiar with the program as saying.

The test was largely expected after the Defense Research and Development Organization (DRDO), India’s premier defense technology agency, announced that it was developing an 800km variant of the missile in February 2017. The following month, in March 2017, India test fired a 400km version of the BrahMos missile. As the Hindustan Times report points out, the extended range BrahMos missiles were made possible by India’s entry into the Missile Technology Control Regime (MTCR) in June 2016. India jointly developed the missile with Russia, and the MTRC restricts its members from sharing a missile with a range greater than 300km with a nonmember of the treaty.

The BrahMos is a two-stage supersonic cruise missile that was jointly developed by India’s Defense Research Development Organization and Russia’s NPO Mashinostroyenia. BrahMos Aerospace, the joint organization created to develop the missile, explains that it is a "two-stage missile with a solid propellant booster engine as its first stage which brings it to supersonic speed and then gets separated. The liquid ramjet or the second stage then takes the missile closer to 3 Mach speed in cruise phase. Stealth technology and guidance system[s] with advanced embedded software provides the missile with special features." One of those special features is its ability to fly extremely close to the ground to avoid missile defense systems. According to BrahMos Aerospace, during terminal phase the missile can fly as low as ten meters to the ground.

Notably, despite the missile’s immense speed, it actually weighs twice as much as America’s Tomahawk missiles. This speed-weight ratio makes the BrahMos incredibly lethal. As Sebastien Roblin has noted, “The combination of twice the weight and four times greater speed as a Tomahawk result in vastly more kinetic energy when striking the target. Despite having a smaller warhead, the effects on impact are devastating.”

Russia and India signed an agreement to begin developing the missile in 1998. It is reportedly based on the Russian-made P-800 Oniks/Yakhont supersonic antiship cruise missile. The first BrahMos missile was first tested in 2001. Since then, India has been building the missile as a triad threat—that is, one that can be launched from the ground, air and sea (as well as from submarines). It was initially developed to be an antiship missile similar to the P-800 Oniks. According to India’s Economic Times, the antiship version “is capable of hitting sea based targets beyond radar horizons.”

Later, India sought a ground-based version. The first of these was tested on mobile launchers for the Indian Army in 2004, and it was likely declared operational about five years later. The Economic Times has noted of the ground-based version: “The mobile land-based configuration of BrahMos has achieved several advancements over the years in the form of Block I, Block II and Block III variants with each having its own distinct potentiality to hit and destroy enemy target.”

There have been a number of significant developments for the BrahMos missile since the beginning of 2017. First, as noted above, India launched the 400km range BrahMos missile in March 2017. Then, in April of last year, India’s Navy carried out the first test of a land attack BrahMos missile from a frigate. “The land-attack variant of BrahMos provides Indian warships the capability to precisely neutralize selected targets deep inland, far away from the coast, from stand-off ranges at sea,” an Indian Navy source said at the time. Finally, on November 22, India’s press office announced that a BrahMos Air Launched Cruise Missile (ALCM) was test fired for the first time from a Su-30MKI fighter aircraft. Delhi now aims to make fifty Su-30s capable of carrying the Indo-Russian missile. Delhi is also hoping to eventually have two hundred BrahMos-capable aircraft overall.

The future of the missile will be bright if India and Russia have any say in the matter, and not just for India’s armed forces. After India became a member of the MTCR, the two sides began eyeing the missile for export. BrahMos Aerospace initially suggested that the United Arab Emirates, Chile, South Africa and Vietnam were potential customers. Reports since have said that Vietnam is especially interested in purchasing the antiship cruise missile, although no sales have been finalized and it is unclear how advanced negotiations are (or whether they are even taking place). More recently, at the Dubai Air Show in November 2017, a BrahMos Aerospace official said that Brazil, Indonesia and Kazakhstan were also interested in purchasing the missile. According to the same company official, their interest was primarily in the air-launched variant.