Is Indonesia Ready to Be a Major Player in the South China Sea? 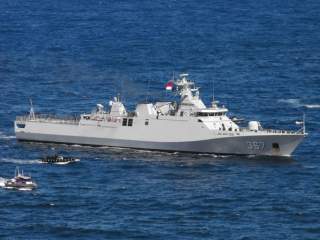 Last Sunday’s incident north of Indonesia’s Natuna Islands, in which two armed Chinese coastguard ships forced an Indonesian patrol craft to release an intruding Chinese trawler, shows once again that Jakarta must confront the reality of an overlap between its 200-mile economic zone and China’s "historic" nine-dash line of maritime sovereignty that penetrates deep into the South China Sea.

Indonesia may not be a claimant to the disputed Spratly Islands, but the incident is the first real test of President Joko Widodo’s ambition of turning the country into a maritime power, a policy that necessarily means asserting sovereignty over its vast sea boundaries.

Although it has strongly supported efforts to create a Code of Conduct to head off the danger of open conflict, Indonesia’s approach up to now has seemed strangely adrift at a time when superpower rivalry in the region is heating up.

Not only has the nine-dash line become an annoying ambiguity Beijing refuses to explain, but those incidents, largely unpublicized at the time, showed China was willing to use threats of violence to enforce its version of the maritime boundary.

Widodo has been equally tentative in his approach to Beijing, particularly with Chinese companies financing and building some of his treasured infrastructure ventures, including the Jakarta-Bandung rapid rail project and several major coal-fired power plants.

But this time, the Indonesians managed to detain the trawler’s eight-man crew and launch a formal protest, with feisty Fisheries and Maritime Affairs Minister Susi Pudjiastuti summoning Chinese Ambassador Xie Feng to demand an explanation.

Indonesia has always claimed it doesn’t have a dispute with Beijing in the South China Sea, but a Chinese Foreign Ministry statement claiming the trawler was in “traditional Chinese fishing grounds” will be hard to ignore.

Although Indonesia has sunk 155 foreign fishing vessels since a crackdown against illegal fishermen went into force at the start of Widodo’s presidency in late 2014, only one was of Chinese origin–and even that had been captured back in 2009.

Soon after the campaign began, Pudjiastuti received an unsigned letter at her home, bearing a Chinese Embassy stamp, which warned of dire consequences if captured Chinese trawlers were scuttled, like those from Thailand, Vietnam and other neighboring countries. “I think they have a long term global view and in that they see the Chinese lake to the south as a necessary part of that view,” says one former senior Indonesian diplomat. “The Law of the Sea isn’t the only reference for them. It’s anything that serves their interest.”

Given the unfolding events in the South China Sea and its designated job of protecting an archipelago that sprawls across some of the world’s most important trading routes, its extraordinary that the Indonesian Armed Forces (TNI) still plays only a minor role in the nation’s strategic planning.

Indeed, even the Coordinating Ministry for Political and Security Affairs is more preoccupied with day-to-day domestic events than coming up with strategic guidance on what the region might look like in twenty years and how the military should position itself.

Instead, with the TNI having surprisingly little to say about big power involvement in the region, it is the Foreign Ministry which takes the lead by default in pursuing a so-called ‘free and active’ policy, built largely around enhancing ASEAN’s role as a burgeoning but hardly unified regional community.

In its still-to-be-released 2014 Defense White Paper, TNI does acknowledge the possibility of Indonesia being affected if tensions in the South China Sea erupt into conflict. But mostly it plays down external threats and focuses on international terrorism, transnational crime and illegal immigration as priority issues.

In the past two years, TNI commander Gen. Gatot Nurmantyo has crafted those issues into a newly-developed theory of an international conspiracy in which unnamed foreign states are supposedly using domestic proxies to weaken the country from within and to rob it of its resources.

It remains unclear what real evidence he has to support the idea, but it serves as an ideological justification for the military’s efforts to regain a more prominent role in internal security. As the Institute for Policy Analysis of Conflict (IPAC) noted in a recent report: “For the TNI, the great value of the proxy war thesis is that it fuses international and domestic threats and suggests that to deal with an external threat, the military must strengthen its internal security role.”

Apart from superficial elements, officials in the wider region complain that Indonesia doesn’t have a coherent foreign policy. Domestic critics agree, saying the problem lies in the whole policy-making process itself.

Even continuing to place ASEAN as a cornerstone of what is largely a reactive policy isn’t convincing given the fact that most Indonesians see the newly-implemented ASEAN Economic Community as a more of a threat than a challenge because of logistical and educational weaknesses.

Yudhoyono openly welcomed U.S. President Barack Obama’s “Pivot to Asia”—and the training of U.S. Marines in northern Australia—because he was worried the serious inroads the Chinese were making into the region threatened to squeeze ASEAN apart.

But if it was a good example of SBY being a “foreign policy president,” Indonesia has since failed to build on the leadership role it saw for itself under his presidency, or in advancing the concept of a Code of Conduct that will hopefully make the South China Sea a safer place.

John McBeth is a Jakarta-based correspondent. This article first appeared in the Strategist.