Iran Is Building Its Own Submarines (With Torpedoes the U.S. Navy Can't Match) 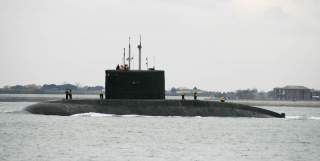