Iran's Close Encounters With the U.S. Navy in the Persian Gulf 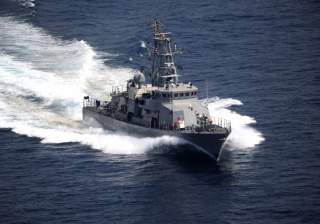 Iran’s Islamic Revolutionary Guard Corps (IRGC) is stepping up its harassment of U.S. forces in the Persian Gulf. In the past few weeks, U.S. ships had to swerve and fire warning shots on separate occasions to avoid colliding with oncoming Iranian ships. The U.S. Navy recorded 31 such instances of "unsafe and/or unprofessional interactions" by Iran in the first half of this year, compared to 23 in all of 2015. The increase corresponds to the implementation of the Joint Comprehensive Plan of Action (JCPOA) on Iran’s nuclear program in January, but this is not just a game of chicken to test U.S. resolve in the wake of the deal. More importantly, these incidents are live-fire maneuvers for Iran’s larger strategy to contest U.S. predominance in the Persian Gulf.

This strategy is called anti-access/area denial (A2/AD). Anti-access prevents enemy forces from projecting power into a theater of operations, while area denial degrades the enemy’s ability to operate once in that theater. In other words, don’t let your enemy get into your front yard, but if it does, wear it down.

Iran has been actively developing such a strategy for the Persian Gulf. Since Operation Praying Mantis in 1988, where the United States wiped out half of Iran’s navy in an afternoon, Tehran understands the prohibitive costs of trying to confront superior U.S. conventional forces head-to-head. Since then, the Iranians have focused instead on asymmetric capabilities and tactics pitting their own forces’ strengths against U.S. vulnerabilities.

First, the IRGC Navy has a sizable fleet of relatively small, high speed and highly-maneuverable attack craft. Many of these are equipped to fire rocket, mortar or torpedo barrages, and others are packed with explosives to ram enemy vessels. When converging from multiple directions into a swarm, Iran’s attack craft can overwhelm much larger and slower U.S. naval ships around the Gulf.

These small vessels exploit geography to complicate detection and tracking, using the element of surprise to further level the playing field with U.S. forces. As a global energy chokepoint, the Strait of Hormuz and surrounding waters are crowded with tankers and other commercial vessels, which could inadvertently screen converging swarms and hamper radar detection. Additionally, many IRGC bases for launching such attacks are concealed by rocky islands dotting Iran’s coast and the Strait.

Second, Iran has accumulated the Middle East’s largest ballistic missile arsenal and a robust collection of cruise missiles. Its ballistic missile tests steal the headlines, given their potential for carrying nuclear warheads and their clear intention to intimidate U.S. allies. However, the greater threat to ships in the Gulf comes from Iran’s array of anti-ship cruise missiles (ASCM) launched by highly mobile land, sea and air platforms. These missiles are much more low-flying and maneuverable than ballistic missiles, and thus harder to track and intercept. When fired in sufficient numbers from different locations in rapid succession, ASCMs could attrite or oversaturate missile defense systems of U.S. ships.

Additionally, Iran is making a push to redress a key remaining shortfall in its ability to deny or degrade U.S. power projection capabilities: the air domain. In July Iran deployed the highly advanced S-300 air defense system from Russia, thus increasing by leaps and bounds its ability to shoot down U.S. aircraft, unmanned aerial vehicles (UAV) and long-range standoff weapons such as cruise missiles. Depending on how and where the system is deployed, it could defend not only Iranian airspace, but also Iranian forces operating in and around the Strait of Hormuz.

Since January, Iran has tested ASCMs, fired a rocket salvo across the bow of a U.S. aircraft carrier and swarmed multiple other U.S. Navy vessels with fast attack craft. It also threatened to shoot down U.S. military aircraft, and made clear its interest in obtaining highly capable Su-30 fighters from Russia that could target U.S. ships. Last year, Iran even blew up a replica U.S. carrier in the Strait of Hormuz using land-, sea- and air-launched missiles.

Our Gemunder Center for Defense and Strategy has assessed in multiple reports how the JCPOA makes conflict with Iran more likely in the coming years. The lifting of sanctions and the U.N. Security Council arms embargo, combined with weakening U.S. security commitments to the region, provide Iran resources and incentives to pursue more aggressively its A2/AD strategy to displace U.S. preponderance in the Persian Gulf. Indeed, its recent actions offer insight into the capabilities and tactics it would likely deploy against U.S. forces in that area.

Fortunately, the United States possesses a solid framework to begin seriously countering these challenges. On the strategic level the Carter Doctrine already declares “any attempt by any outside force to gain control of the Persian Gulf region will be regarded as an assault on the vital interests of the United States of America, and such an assault will be repelled by any means necessary, including military force.” Issued in response to the 1979 Soviet invasion of Afghanistan, this has been the prime mover of U.S. policy toward the region ever since.

The Carter Doctrine needs updating. Iran is not the first regional power capable of gaining control of the Persian Gulf, but its ability to do so will continue growing under the JCPOA. U.S. leaders should make this clear, and should articulate and assert the revised policy more vigorously and frequently – both in advance and response to further Iranian provocations in the Gulf.

Tactical-level changes can bolster the credibility of these statements. Greater numbers of lower-cost and shorter-range interceptors, including close-in weapons systems, are crucial against Iran’s improving fast-attack and ASCM capabilities. Indeed, Iran’s current swarming techniques are designed in part to overwhelm and exhaust U.S. ships’ Vertical Launching Systems (VLS) that use fewer, longer-range interceptors. Additionally, U.S. policymakers must redouble the U.S. Navy’s ongoing efforts to outfit its warships with directed-energy weapons, including laser weapon systems. Over the medium to long term, these offer a much cheaper solution than kinetic interceptors for defeating swarms of fast attack craft, UAVs and various Iranian missiles.

Tensions between the United States and Iran appear headed toward a repeat of the long standoff that culminated in Operation Praying Mantis. This time, Tehran is making clear efforts to be better prepared if push comes to shove, as it did in 1988. It behooves Washington to do the same.

Jonathan Ruhe is Associate Director and Blake Fleisher is a policy analyst at the Gemunder Center for Defense and Strategy, part of the Jewish Institute for National Security Affairs. Follow Mr. Fleisher on Twitter @BlakeFleisher.