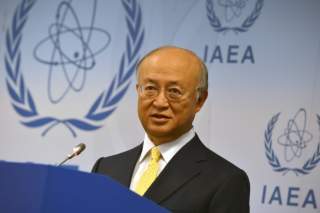 The nuclear deal with Iran requires that it tell the truth–the whole truth–about its previous efforts to build a nuclear weapon.

senior Administration officials repeatedly told the American people that Iran should come clean on all nuclear weapons activities as part of any final deal:

After the Iran nuclear agreement was signed, the Administration reversed itself:

Why this reversal? We now have some evidence of why: Iran was in fact working on nuclear weapons until at least 2009, and has refused to “come clean.” To have demanded that Iran truly comply with the language of the nuclear deal might have torn the deal apart, and the Obama administration would not allow that–at any cost. The newest IAEA report on the Iranian program is described in The New York Times:

Iran was actively designing a nuclear weapon until 2009, more recently than the United States and other Western intelligence agencies have publicly acknowledged, according to a final report by the United Nations nuclear inspection agency.

The report, based on partial answers Iran provided after reaching its nuclear accord with the West in July, concluded that Tehran conducted “computer modeling of a nuclear explosive device” before 2004. It then resumed the efforts during President Bush’s second term and continued them into President Obama’s first year in office.

But while the International Atomic Energy Agency detailed a long list of experiments Iran had conducted that were “relevant to a nuclear explosive device,” it found no evidence that the effort succeeded in developing a complete blueprint for a bomb.

In part, that may have been because Iran refused to answer several essential questions, and appeared to have destroyed potential evidence in others.

Where does that leave us? First, we see that all the Iranian propaganda about never, ever building a weapon, and about the mysterious “fatwa” barring Iran from having a nuclear weapon, was a pack of lies. They were working on a weapon as recently as 2009. Second, we see that the nuclear deal, however weak its terms, will not in any event be enforced. Read again those words from our top negotiators, Kerry and Sherman. If those demands on Iran have been abandoned, which will be next?

The treatment of the famous PMDs, the “possible military dimensions” of Iran’s nuclear work, has now been abandoned–and the IAEA apparently was not even allowed to speak with the head of the program, the Iranian official Mohsen Fakrizadeh. The lesson this teaches Iran is that the United States, at least under this administration, has too much invested in the agreement to demand full Iranian compliance with it.

There are other implications, as The Times suggested:

Iran’s refusal to cooperate on central points could set a dangerous precedent as the United Nations agency tries to convince other countries with nuclear technology that they must fully answer queries to determine if they have a secret weapons program.

Quite right. The deal itself is bad enough, but a failure even to enforce it means the likelihood of nuclear proliferation has risen even further.