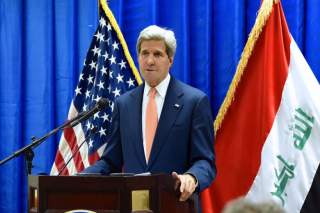 On June 22-23, fighters from the Islamic State of Iraq and the Levant dealt the Iraqi security forces yet another series of embarrassing defeats in the expansive desert province of al-Anbar.  In addition to four small towns being overrun by ISIL militants in pickup trucks, the group managed to wrest control of the Al-Waleed crossing on the Iraqi-Syrian border—forcing police, without army backup, to flee partly into Syria’s eastern Deir-ez-Zor province.  With this latest battlefield success, ISIL has again exemplified how weak, overstretched, and disheveled Iraqi army and police units are in the Sunni-dominated provinces in the north and west, and how irrelevant the Syrian-Iraqi border has become.

The violence tearing Iraq apart is especially concerning to politicians and policymakers, Democratic and Republican alike, who were hoping that the word “Iraq” could be eliminated from the American political lexicon.  Unfortunately, that wish has not been granted.  Indeed, just two and a half years after U.S. combat troops departed the country for good after a tough and bloody nine-year occupation, the Washington of 2014 feels eerily familiar to the Washington of 2006 and 2007—Iraq, in other words, is on everyone’s mind.

Just as everyone in Washington has an opinion, it seems as if every Democrat, Republican, and Independent on Capitol Hill, the media, or in the think-tank industry has ideas for how the United States should deal with Iraq’s latest security crisis.  Ryan Crocker, the former U.S. Ambassador to Iraq and one of U.S. Foreign Service’s most effective and respected diplomats in the Arab world, wants President Obama and Secretary of State John Kerry to personally invest in Iraq’s political future in much the same way that the David Petraeus-Ryan Crocker duo was able to do in 2007-2008.  Fred Kagan and William Kristol are pushing for U.S. troops to return to Iraq in larger numbers than the Obama administration is willing to expend (presumably, a larger U.S. deployment would increase American leverage with Prime Minister Nouri al-Maliki’s government).  House Foreign Affairs Committee Chairman Ed Royce wants U.S. drone strikes on ISIL targets immediately, while Rand Paul calls any further U.S. military intervention in Iraq’s civil conflict a terrible mistake that ignores the lessons of the U.S. occupation years earlier.  And those are only a few prescriptions being offered.

President Obama and his national security team are no doubt cognizant of all of these recommendations, just as they are determined not to launch a third war in Iraq in twenty-five years.  “American forces will not be returning to combat in Iraq.” Obama said on June 19 as he unveiled his Iraq policy to the American people.  With Iraq synonymous with words like “disaster” and “quagmire,” Americans are incredibly happy that Obama uttered that statement.

Yet pressed by events, including an utterly disastrous and pathetic performance by the Iraqi army in the north and west of the country, the same man who successfully campaigned on ending the war is now confronted with a number of choices that could ruin his legacy as the Commander-in-Chief wise enough to terminate America’s military involvement in Iraq.

After seeing a few Iraqi army divisions collapse without a fight, President Obama announced that there would be a small deployment of 300 U.S. special operators for two limited missions: assessing where the Iraqi security forces are and what needs to happen to stop the bleeding.  Intelligence, surveillance, and reconnaissance assets inside of Iraq have increased exponentially since ISIL took the city of Mosul nearly two weeks ago, and reinforcements have been sent to the U.S. Embassy in Baghdad to secure the facility and ensure that American diplomats on the ground are safe and secure.

For many on the Republican side, particularly those like Dick Cheney, Paul Wolfowitz, Doug Feith, and Paul Bremer who were partly responsible for mismanaging the U.S. occupation during the 2003-2006 timeframe, Obama is engaging in half-measures for the sake of his political legacy: afraid of doing nothing in the face of a jihadist menace barreling towards Baghdad, but equally afraid of tying U.S. military and intelligence resources back into a country that Americans would much rather run away from.  Unfortunately for the neoconservative architects of the 2003 U.S. war in Iraq, their views are completely discredited by tens of millions of mainstream Americans.

The Obama administration has gotten a lot of heat in the polls over what is often labeled as a disjointed, ad-hoc, and reactive policy to international events, with only 37% of Americans approving of the way the president is “handling foreign policy.”  On the specific issue of Iraq, however, the president and his national security team are in step with the American public, a majority of which do not want to see any U.S. boots on the ground under any circumstances.

The first U.S. advisers are just now making the trip to Iraq, and there is every reason to believe that the president’s attempt to shore up the capabilities of the Iraqi Government will be a long-term effort that could continue even after the ISIL threat is rolled back and contained.

While it’s almost impossible to evaluate the administration’s policy response to the ISIL problem inside Iraq (it’s way too premature), it at least looks as if the White House is trying to construct a multilateral solution to what is a multilateral Iraqi security problem.  Airstrikes on ISIL convoys and training locations may make us all feel better in the short term (ultimately, the U.S. advisers being deployed could serve as a critical enabler to a selective air campaign), but they will not adequately address the kinds of internal disturbances embedded within the Iraqi political system that have allowed groups like ISIL to function.  As any serious Iraq watcher will tell you, the kind of terrorism imposed by groups like ISIL cannot be solved solely with military force: creating a framework that convinces all Iraqis to invest in the political system is the ultimately remedy.

This is naturally easier said than done.  Or, as the administration likes to say, ‘if it was easy, it would have happened a long time ago.’  But for those who are concerned about U.S. foreign policy in the Middle East or for the security of Iraq as a nation-state, we can be somewhat encouraged that the president’s Iraq strategy is attempting to tackle the political roots of the issue head-on.  Or, in the administration’s own words: “all leaders of all sides of all parties have to treat the situation with extreme urgency and begin in a very serious…way the negotiations for the makeup of the government.  And that government, in our view, in order to provide stability in the country, has to be a broadly inclusive one.”

The president’s policy can best be described as “Iraq is for Iraqis, but the U.S. can help.”  Americans have long grown tired of pulling Iraq in the right direction on their shoulders, so let’s all hope that this time, Iraqis will work as hard as Americans to rescue their own country from a third sectarian-laced civil war.