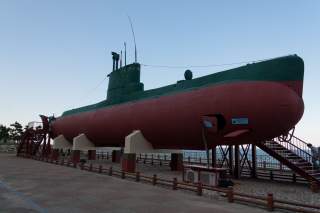 It is an incongruous sight. Balanced on a stand on the rocky shoreline of northeastern South Korea perches a small submarine, just 100 meters from one of the many, many concrete bunkers that stand sentry over this strategic stretch of surf-smashed coast.

The bunkers and tangles of razor wire are South Korean. The vessel is not: She is a North Korean infiltration boat which ran aground here in 1996.

Despite her toy-like exterior – small in size, painted in green and red, she resembles a child’s drawing of a submarine – what happened to her crew is one of the grimmest tales in the annals of modern warfare.

On the night of September 17, 1996, a taxi driver motoring along the coastal road just outside the city of Gangneung spotted something odd in the dark water. Curious, he stopped his car and looked closer. What he was looking at was a North Korean Sango (“Shark”) class infiltration submarine.

A security alert was issued at 05:00 on the morning of the 18th for the whole of Gangwon Province, the area where the Winter Olympics and Paralympics are currently underway. According to a detailed report on the operation published by specialist website NK News, over 40,000 South Korean troops deployed into the rugged hills and mountains to track down the infiltrators. Among the hunters were two full brigades of South Korea’s own killer elite: “black berets,” or airborne special forces.

One of their first finds on a hillside was a row of 11 dead men. All had been shot in the head. There was no sign of a struggle. They are believed to have lacked physical fitness, so been executed – apparently without resisting – by their comrades. The remaining sailors – some of whom had special forces training – and a three-man commando team split up and headed north. Their plan was to exfiltrate through 150 km of South Korean territory, then cross the DMZ into friendly territory.

Some of the escapees were dressed in dark-colored civilian clothes and tennis shoes; others were in South Korean uniforms and carried South Korean weapons. These men were elite troops of the Reconnaissance General Bureau, or RGB: North Korea’s 200,000-strong directorate for espionage, special operations and, more recently, cyber warfare.

Over the next days and weeks, scattered firefights would take place across Gangwon’s autumnal forested terrain as groups of infiltrators were discovered and engaged. When it was over, 13 had been killed in gunfights. One surrendered to local police. (He was debriefed, turned, and now works as a special advisor to the South Korean Navy.) One was never found. He is presumed to have escaped back to North Korea – a masterly feat of tactical field craft.

It was later discovered that the commandos, using scuba gear, had carried out a successful reconnaissance of South Korean military installations ashore before their vessel ran aground as it came inshore to pick them up.

It would not be the last such operation.

In 1998, a Yono (“Salmon”) class mini-submarine was trapped in the nets of a South Korean fishing boat outside the nearby port of Sokcho – like Gangeung, on the Sea of Japan, or what Koreans all the East Sea. The vessel sunk as it was being towed into shore; by accident, or as a result of scuttling by the crew is unclear.

This time, the crew did not escape. Inside, was a gruesome scene. When the boat’s hatches were forced open, it was discovered that the nine men aboard, crew and commandos, had shot each other and themselves rather than face capture.

An RGB-controlled midget submarine is widely believed to have launched the deadliest attack on South Korea in recent years – albeit on the other side of the peninsula, in the Yellow Sea. The submarine was blamed for the sinking of the corvette Cheonan in 2010, for the loss of 46 South Korean sailors. North Korea denies that attack.

All aboard a claustrophobe’s nightmare

However, North Korea did, belatedly, admit to the 1996 incident: It called it a training operation that went wrong. As a result of Pyongyang’s admission, the cremated remains of the infiltrators were returned to North Korea. The submarine, however, was not.

The boat is now accessible by the public in what is an open-air, waterfront museum just outside Gangeung. The damage to her stern and screws from her grounding is plain to see. A ladder takes you up and into her interior, through either bow or stern hatches.

German U-boat men of World War I dubbed their craft “iron coffins,” but the North Korea boat, at just 35 meters long and less than four meters wide, is smaller than their wartime vessels. Her interior is cramped to the extreme. The three compartments are lined with a tangle of tubing, valves and communications equipment; fire damage can be seen in the conning tower. The only sanitation facility aboard is a single sink.

To picture 26 men, complete with scuba gear and weapons, compressing themselves into this tiny underwater space is a claustrophobe’s nightmare.

Back in the sunshine, the museum’s exhibits also include a small wooden vessel. A North Korean semi-submersible infiltration boat, piloted by naval commandos, she is one of several that have been found off the South Korean coast.

Far more impressive is a World War II-era US destroyer, the USS Everet Frederick Larwon that was donated to the South Korean Navy in 1972. Renamed Jeonbuk, she remained in service until 1999, after which she became part of the museum exhibit. Bristling with gun turrets, anti-aircraft weapons and anti-submarine mortars, she towers over the puny North Korean naval assets in her shadow.

Yet, while much evidence suggests that the regular North Korean People’s Army is poorly equipped and poorly fed with minimal medical backup – a defector last year was infested with intestinal worms contracted through eating contaminated food – there is no question that North Korea’s special forces represent a potent threat.

In repeated operations – in 1968, 1969, and the two submarine incursions – these troops have fought to the death, killed each other or killed themselves to avoid capture. And each time, they have taken a heavy toll on their South Korean opponents.

While their equipment may be primitive, their training and motivation are clearly top-tier. A US special force veteran evinces a grudging respect for their spirit.

“Morale probably is high when they are willing to carry out such operations – to send a special forces soldier on an unsupervised, cross-border, probably kamikaze mission, requires very high morale,” said Michael Yon, a former Green Beret who covered the Afghan and Iraq conflicts as a blogger and independent journalist.  “They realize that if caught, chances of torture are high, and all odds are stacked up against them.  They must be self-reliant – they cannot call for reinforcements or extraction.”

With US war planners reportedly mulling limited strikes against North Korea’s nuclear and missile programs after the Paralympics end on March 18, the RGB is a viable asset that Pyongyang could activate in response.

Korea-based US troops, speaking off the record, say that they do not expect North Korea to react to a US attack with conventional weapons, such as artillery: to do so could lead to North Korea losing any possible control as the conflict escalated. The result could mean all-out war, and the likely downfall of the Kim regime.

Hence, a “deniable” response – such as terrorist attacks carried out by deep cover, plain-clothes RGB personnel against US military, political or commercial assets in South Korea, or further afield, such as in Japan or Okinawa – is a plausible retaliation scenario.

Assets may already be in place, Yon speculated. “For those who have not been there and may infiltrate during the time of war, they likely have memorized in detail the maps and terrain around their targets,” he said. “There is a high chance weapons and other war materiel are cached in the South.”

The fact that they sound and look local would make them very, very hard to detect, Yon continued.

“North Korean special forces already speak the language and look the part: A change into civilian clothes backed by counterfeit documents is enough to blend in and supply themselves,” he said. “There is a good chance that some of the officers are living there right now – one wonders how many defectors are operatives, including females.”