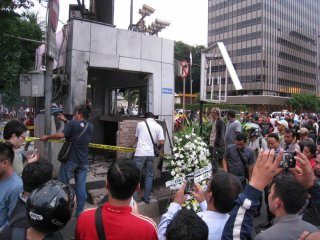 The terrorist attacks in Indonesia’s capital, Jakarta, on January 14 are concerning, but hardly surprising. The Islamic State of Iraq and al-Sham (ISIS) has claimed responsibility for the attacks, a first for the group inside the world’s largest Muslim country.

It is clear that ISIS is seeking to increase its global footprint and searching for new ground to grow its supporter base. Indonesia is an obvious target for ISIS for a number of reasons, and in some ways it is surprising that such an attack did not happen sooner.

Indonesia has a history of violent extremist groups as well as terrorist attacks. While relatively small in number, Indonesian foreign fighters are also known to be active in jihadist groups around the world, as they were in Afghanistan in the 1980s. But such a simplistic analysis does Indonesia a disservice, and does not help understand the nature of the threat.

Indonesia not only has the largest Muslim population in the world, but also a very tolerant and moderate one. The belief in God is enshrined in Pancasila, the founding philosophy of the country, but it encompasses not only Islam, but Christianity, Hinduism, Confucianism and Buddhism as well. Pancasila also incorporates notions of social justice, democracy, consensus and national unity through diversity—necessary elements to bind a nation of over three hundred ethnic groups. Indonesia’s moderate population makes it generally resistant to extremist ideology, and therefore a target for those seeking to radicalize and polarize the world. Indonesia provides a powerful counterpoint to secularists’ claims of a coming religious war.

In such a diverse nation it is unsurprising that there are radical fringe elements that would be attracted to ISIS’s message. Indonesia has a history of insurgent and separatist militant groups, though regional issues such as autonomy from the central government have more often been their primary motivation. Radical Islam has been present in Indonesia since its independence, but has posed an increased threat since the turn of the century as a series of high-profile bombings occurred, against mostly foreign targets. These were known or suspected to have been perpetrated by the transnational Islamist group Jemaah Islamiyah (JI), which was linked to al Qaeda and the Taliban, and long sought to establish an Islamic region in South East Asia.

In recent years, JI has been effectively targeted and contained by regional militaries and police forces, often with assistance from Western security partners. Does the January 14 attack then represent a security failure or signal a resurgence of JI across the region? Or does it represent the growth of a new Islamist group? ISIS has claimed responsibility for the attack, but it is unclear whether the attack was carried out by a group it actively created and supported or by a domestic group seeking to attach itself to the strongest current Islamist brand. There are at least eighteen Islamist groups in Indonesia that have declared support for ISIS. In some cases these groups have sent fighters to Syria and include former JI members. It is likely that one of these newer, smaller groups, such as Jamaah Tauhid wal Jihad (JTWJ) or Jamaah Ansharut Tauhid (JAT), was involved in some way.

We do not yet know enough to fully understand the threat, but some early conclusions can be drawn. The number of assailants involved and the coordination it would have taken indicates a sizeable support network for the militants in Jakarta. Authorities received non-specific threats late last year, but the simplistic and ineffective nature of the attack shows a lack of capability and planning.

The attack is also very different from previous JI attacks in Indonesia, which generally involved large bombs hidden in vehicles. The use of small explosives and assault rifles in the January 14 attack more closely resembles the tactics used in the attacks in Paris on November 13, 2015. The Jakarta assault is bolder than previous domestic attacks and the change in tactics would imply the emergence of a new homegrown group that is taking inspiration, rather than guidance, from ISIS. The lack of large bombs may also result from a lack of trained bomb makers, many of whom have been arrested.

The attack in Jakarta is unsurprising because ISIS has been seeking to broaden its global reach, and Indonesia is an obvious target. Indonesia is a strong moderate society with an effective security apparatus. It is not at risk of being destabilized, as we have seen in other parts of the world. The group behind the January 14 attacks is undoubtedly an extremist minority on the fringes of Indonesian society. But in a population of 250 million, even a small fringe can pose a potentially significant threat.

John Watts is a Nonresident Senior Fellow in the Middle East Peace and Security Initiative of the Atlantic Council’s Brent Scowcroft Center on International Security. This article first appeared in the New Atlanticist.