ISIS has a Choice to Make: Build a State or Super Terrorist Organization 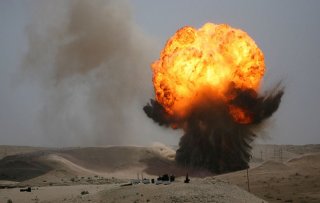 Abu Bakr al-Baghdadi, the leader of the Sunni extremist group known as the Islamic State of Iraq and Syria (ISIS), has a tough decision to make.

He can aim high and marshal all his human and material resources to consolidate his de-facto state in the borderlands of Syria, Iraq, and soon possibly Jordan and Lebanon. That’s a high-risk, high-reward strategy. Or he can drop the idea of statehood altogether and focus on excelling at something smaller: the creation of the most lethal clandestine terrorist organization in the world that could supplant Al-Qaeda. That’s a limited objectives, low-risk strategy. The choice is clear: it’s between setting up a state and setting up shop, it can't be both, and what al-Baghdadi picks will have serious implications for the future of his group, the Middle East, and that of transnational jihadist terrorism.

There are unique benefits to the first option. If al-Baghdadi succeeds in establishing a physical state, he would be the first jihadist leader to rule over a real Islamic Caliphate built on jihadist laws and principles. The jihadists’ dream would finally come true. Al-Qaeda has been calling for the creation of such a state since its inception in the early 1980’s, and its various franchises in Northern Africa, the Levant and the Arabian Peninsula have tried over the years to seize territory and force sharia law on its inhabitants. But the land they have sought to control is small and barren, making it strategically insignificant and practically ungovernable. In contrast, the areas that al-Baghdadi has taken over are vast, sufficiently populated, and rich with resources including oil, making them ideal for governance.

But for the vision of statehood to survive, al-Baghdadi would have to commit to sustaining an overt and powerful insurgency that would be capable of defending his new state from all enemies. This won’t be easy. World governments, and especially Washington, will not tolerate such a major terrorist safe haven. The Middle East’s Shi’ites will also be on the offensive, doing everything they possibly can to destroy al-Baghdadi’s state.

Aside from trying to secure what may be an indefensible state, al-Baghdadi would also have to govern over a sizable constituency, and that includes paying salaries, policing, administering, and delivering social goods and services. The historical record shows that extremist Islamic groups are only good at killing people who don’t agree with them, and nothing else. Sure, al-Baghdadi might not care much about doing a good job at governing, but indifference would most likely cause defections and desertions among the ranks, and possibly rebellions, which would ultimately lead to his state's collapse. It’s one thing to set up a state, but maintaining it is another thing altogether.

The second option, which US intelligence agencies are already analyzing and worrying about, is purely a terrorist model, with no plans for societal and territorial control. With more than a billion dollars and thousands of supporters, al-Baghdadi can turn ISIS into the most powerful terrorist organization the world has ever known. He could inherit the world of jihadist terrorism and dethrone Ayman al-Zawahri, the al-Qaeda chief. With this amount of money and this large a following, he can build the most sophisticated network of terrorist cells across and beyond the region. He can recruit, train, and plan for the next 9/11 and even more. But there is only one condition: al-Baghdadi would have to give up statehood and go underground. To be effective, he would have to do this covertly. He would have to forget about political power and public leadership and operate away from public eyes.

So which goal does he value more? Ruling a kingdom temporarily or attacking Western interests for the long term? For now, all signs on the ground indicate that he is at least going to try pursuing the first option. It is not every day that a strategic opportunity like this presents itself. The Iraqi army is relatively weak and the international community's and specifically the United States' reaction has been lethargic.

But by choosing the first option, he risks losing everything. If he continues to expand and opts for statehood but fails, there is a big chance that he won’t be even capable of exercising the second option. That’s because the potential breakdown of his state will be demoralizing and it will deal a huge blow to his group. As a result, his support-base will most likely shrink, and fighters from the Syria-based and al-Qaeda-affiliated Jabhat al-Nusra and other radical Syrian entities will immediately walk away. Most likely, they will prefer not to partner with a defeated group and a leader on the run. Surely al-Baghdadi will still try to create a clandestine presence if his state falls, like Fatah al Islam leaders did after they were defeated in the battle of Nahr al Bared against the Lebanese Army, but he won’t be nearly as dangerous because he won’t have as much money or as many followers. He will be just like any other local al-Qaeda commander in the region, trying to survive and avoid getting killed by rivals or a US drone. The time to make a decision is now.

Let’s hope that al-Baghdadi sticks to the choice of statehood and further expansion, because ironically, it is the one path that will most likely lead to his group’s demise. But if he doesn’t allow his ideology to cloud his rational thinking and he somehow manages to escape what is essentially the trap of statehood, he will pose a formidable, global terrorism threat that will make al-Qaeda look like a walk in the park.

Bilal Y. Saab is resident senior fellow for Middle East security at the Brent Scowcroft Center on International Security at the Atlantic Council, specializing in the politics, security, and defense-industrial affairs of the Middle East, with a particular focus on the Gulf and the Levant.