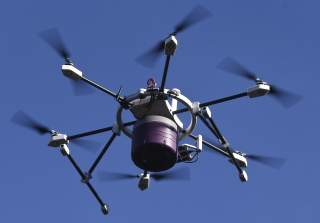 One reason it has proven so difficult to defeat terrorist organizations such as ISIS, al Qaeda and the Taliban is that they are free of the burden imposed by a stultifying acquisition bureaucracy. Terrorist organizations don’t have military academies, national laboratories, large aerospace and defense companies or massive treasuries. The absence of formal institutions and traditional ways of thinking may actually give these groups an advantage. In the U.S. military, a service can’t even begin to develop a new weapons system without a formal requirement, which can take several years to write. The acquisition process often takes twenty years or more before a new weapon system is deployed. ISIS has it easy: no contracting regulations, no lawyers or accountants, no office of operational test and evaluation, no GAO protests or court challenges to procurement decisions and definitely no Congressional oversight.

Terrorist organizations acquire what is available, use the battlefield as their laboratory, tolerate mistakes, extol improvisation and keep trying. While they can’t build major weapons systems, they certainly know how to employ many of them. ISIS has happily incorporated captured armored fighting vehicles, artillery pieces, mortars and other weapons into its arsenals. More significantly, terrorists are extremely good at figuring out how to adapt readily available technologies for military purposes.

The terrorists have made the term improvised explosive device (IED) part of the modern lexicon; the phrase is in the Oxford American Dictionary. But these three simple words belie the variety of such devices, the sophistication with which terrorist organizations have employed them and the implications for the future of counterinsurgency warfare. The IED threat nearly defeated the Coalition in Iraq during the early years of the campaign. More than 60 percent of Coalition casualties were inflicted by IEDs. The Pentagon set up a brand new organization, the Joint IED Defeat Organization (JIEDDO) and spent tens of billions of dollars on armored vehicles, bomb detectors, jamming devices and other force protection measures. As fast as the Coalition figured out means of defeating a particular type of IED, the terrorists changed the way they made, implanted and/or triggered their IEDs.

ISIS turned the IED into an operational weapon and a strategic capability. It set up factories to produce IEDs with supply chains that stretched across multiple continents. Other terrorist groups had employed vehicle borne IEDs (VBIEDs) in Iraq and elsewhere. But ISIS employed them in new ways and on an unprecedented scale. Heavy trucks and even armored vehicles were turned into VBIEDs. Massed VBIED attacks were employed by ISIS like artillery to barrage enemy defenses. Belts of IEDs were implanted around towns and bases to control access. Cities such as Mosul and Raqqa were infested with so many IEDs and other booby traps that the Coalition’s campaign slowed to a crawl.

Ground-based IEDs have had a significant impact on a number of counterinsurgency fights. The ability of ISIS to acquire, employ and weaponize commercially-available unmanned aerial systems or drones could well revolutionize terrorist’s operations and make the efforts of U.S. and allied forces to defeat them much more difficult and expensive.

For more than a century, counterinsurgency forces have dominated the air. In many ways, control of the air has offset the terrorists’ advantages on the ground. The Coalition against ISIS is employing airpower to acquire valuable intelligence information, target terrorist installations and personnel, conduct close air support for friendly forces, attack strategic targets, deliver supplies and perform rapid casualty evacuation. The ability of U.S. and Coalition airpower to control the air and use it as a base of operations against hostile ground forces was the basis for what many observers called a new “American Way of War.” The centerpiece of this approach to war was the intense employment of airpower against all enemy targets to the depth of its territory in order to create “shock and awe.”

ISIS responded to this challenge by acquiring airpower. Commercially-available drones equipped with simple navigation software and carrying small, high-quality cameras give ISIS commanders the ability to enjoy real-time airborne battlefield surveillance displayed on their flat-screen televisions. This is a capability the U.S. military only acquired in the early 1990s.

More significantly, ISIS figured out how to use these commercially-available drones to conduct close air support missions. The Internet is teeming with ISIS-produced videos demonstrating their use of small, lightweight, often hand-launched drones to drop grenades and small bombs on groups of soldiers and even vehicles. The infrastructure needed to support these aerial vehicles and rearm them is so small and cheap that these attacks can be repeated many times a day.

ISIS understands both the military and political significance of this new capability. The terrorist organization has posted high-quality videos that document multiple drone bomb attacks on Coalition forces. The best of these show multiple attacks on personnel, vehicles and even a tank with a high degree of success. What is also interesting is that in each of these attacks, there is no evidence that the forces on the ground knew that ISIS drones were overhead or took any defensive actions.

The armed drone problem was so severe that it nearly brought the Coalition campaign to liberate Mosul to a halt. It was reported that the general in charge of the Joint Improvised-Threat Defeat Organization (JIDO) had to make an emergency trip to the region to figure out how to counter this new threat. JIDO went into overdrive, scouring the world for systems that could detect and counter small, low-flying drones.

ISIS’ ability to operate in the third dimension could dramatically change the balance of capabilities between the terrorist group and the U.S. Coalition. The U.S. military has awakened to the seriousness of the armed drone threat. The mission to counter unmanned aerial systems (CUAS) has taken on a new urgency. Unfortunately, each of the services and even multiple components, agencies and offices are all moving in separate directions to acquire CUAS capabilities. Someone needs to develop a strategy for CUAS like we once had for air defense.