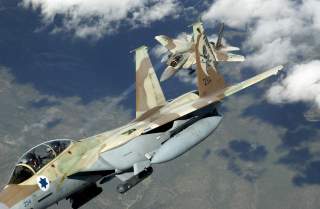 Israel is currently holding its largest air-force exercise ever.

In a November 2 blog post on its website, the Israeli Air Force wrote: “‘Blue-Flag’ 2017, the largest international aerial training exercise in Israel’s history, began today upon the arrival of aircraft from seven different air forces to Ouvda AFB. Throughout the combined training exercise, held this year for the third time, the visiting squadrons will fly alongside Israeli squadrons.” The blog post further explained: “Throughout the first week of the two week-long exercise, the international aircrews will acclimate themselves to the base and get to know each other. Throughout the second week, the participants will rehearse complex scenarios and coalition flights.”

The exercise is expected to last two weeks and feature roughly a hundred aircraft, making it the largest scheduled air-force drill in the world this year, according to various media reports.

The Jerusalem Post reported that Blue Flag “is designed to simulate a range of realistic engagements, with participants conducting hundreds of sorties in airspace over the southern Arava desert. During the exercise, air crews will encounter various combat scenarios, including offensive counter-air strikes, suppression and destruction of enemy air-defense systems.”

German participation is seen as particularly noteworthy given the country's Nazi past. Israel’s left-leaning Haaretz captured the moment when writing: “As symbols of raw military power and historical memories go, few things could have beaten the sight of a Eurofighter jet, carrying the cross of the German Luftwaffe lining up beside an F-15 with the Israeli Air-Force’s blue Star of David, before both of them screamed into the sky over the Negev Desert for an air-combat exercise.” An Israeli officer agreed, telling the Jerusalem Post, “It is very meaningful to see the Germans here. The past is the past and now we have great relationships with them.” For his part, the head of the German Blue Flag delegation told the same paper that he felt “honored” to be one of the first pilots from his country to fly in Israel.

With regards to the aircraft participating in the exercise, the Israeli side will feature a F-15 squadron, an F-16I squadron and two F-16C/D squadrons. Israel also has tactical transport aircraft, Black Hawk helicopters, UAVs and electronic-warfare aircraft at Blue Flag. The United States, Greece and Poland all bought F-16s to the exercise. French pilots will be flying “Mirage” 2000D fighters, while the Germans have Eurofighter Typhoons. The rest of the aircraft include Italian versions of the Panavia Tornado multirole fighters and Indian C-130J “Super Hercules.”

The head of the training branch in the Israeli Air Force (IAF) Air Division, said that Israel has two main goals with the exercise: “The first is to improve the operational readiness of all air forces involved via a quality mutual training experience, while creating a fertile ground for mutual learning. The second is to show the world that the IAF is an advanced, strong and leading force and improve Israel's international status as a result. We see each participant as an ambassador.”

The U.S. delegation—which consists of the Italy-based 510th Fighter Squadron—stressed that the Uvda Air Force Base and surrounding terrain provided an invaluable training experience for American pilots and support crew. “The ranges they have here are nothing like we have back home in Italy. [The Israelis] have very realistic targets and surface threats that we can train against,” said Lt. Col. Benjamin Freeborn, the commander of the 510th Fighter Squadron. He added: “The opportunity to fly out of an unfamiliar airfield, in unfamiliar airspace, with a broadly different group of partners is really priceless training.”

Freeborn added that the exercise was beneficial to the logistical and maintenance crews as well. “Having to generate sorties from an airfield without all of the home station support is a great test for our maintenance and logistics personnel too. It’s a high pace for everyone while we're here,” he said.

The Blue Flag exercise, which is similar to the U.S. Air Force’s famous Red Flag drill, was first held in 2013, and included Israel, the United States, Italy and Greece. The second Blue Flag exercise took place in October 2015, and was significantly larger than the first. Participants in the 2015 edition included Israel, the United States, Greece and Poland. Personnel from thirty-four other nations monitored that drill.