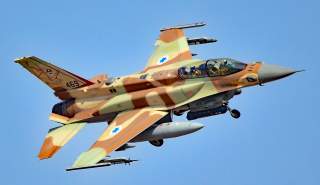 After its provocative violation of Israeli airspace, the drone was destroyed by an Israeli helicopter, and Israel responded with airstrikes on an Iranian command-and-control trailer from which the drone was launched from a base in Syria.

An Israeli F-16 fighter involved in that operation was shot down by Syrian missiles and crashed inside Israel, injuring one pilot. It was the first Israeli fighter plane lost in combat since the 1982 war in Lebanon.

Israel responded by launching a second wave of attacks on 12 Syrian and Iranian targets in Syria, including Syrian SA-17 and SA-5 anti-aircraft batteries and Iranian forces deployed in the country in support of Syrian dictator Bashar Assad.

This is not the first time that Israeli airspace has been violated by Iranian drones, but this incident comes amid rising tensions between Iran and Israel.

Last month, a senior Iranian official visited the Lebanese side of Lebanon’s border with Israel and made provocative comments about the liberation of Jerusalem.

Ayatollah Ebrahim Raisi—who lost Iran’s presidential election last year, but might still be in line to become the next supreme leader—was escorted within a United Nations buffer zone by Hezbollah officials who were uniformed and armed. That was a violation of U.N. Security Council resolutions that prompted Israel to warn the Security Council that Iran was destabilizing the region and subverting the U.N.’s peacekeeping role in Lebanon.

Israel has remained wary about intervening in Syria’s complex, multisided civil war, but has been drawn into a deepening confrontation with Iran and its Hezbollah surrogates, who have exploited the Syrian war to boost the flow of sophisticated weaponry to expand Hezbollah’s threat to Israel.

Israel has launched scores of pinpoint airstrikes to destroy Iranian-supplied arms inside Syria before they could be transferred to the Lebanon-based terrorist group, but none of its strikes have been as large as Saturday’s attacks.

Hezbollah is thought to have amassed an arsenal of about 150,000 rockets that it has dispersed amid civilian buildings and underground facilities covertly built in Lebanon. Iran has provided the bulk of these weapons, including increasingly accurate longer-range missiles capable of reaching most targets in Israel.

Russia—which controls the airspace in western Syria, where the Iranian drone was launched and where Israel conducted retaliatory strikes—called on “all sides” to step back from further escalation.

“We urge all sides to exercise restraint and to avoid any actions that could lead to an even greater complication of the situation,” the Russian Foreign Ministry said Saturday.

An Israeli military spokesman said Israel has no interest in further escalation, but that it would “extract a heavy price” for such aggression. He said Iran was “playing with fire” by violating Israeli airspace, and stressed that the drone shot down was “on a military mission sent and operated by Iranian military forces.”

Israel essentially has signaled that it is willing to quit while it is ahead, but is ready to respond with more force if necessary.

Iran now can choose to either bide its time and lick its wounds, waiting for another opportunity to launch another surprise attack, or escalate the crisis, probably through indirect attacks mounted by Hezbollah in Lebanon or Syria, or by Palestinian allies in Gaza.

Tehran would be well-advised to avoid a direct clash with Israel that it is unlikely to win. It is more likely to adopt asymmetric tactics, attack Israel indirectly using surrogate Shia militias and fight to the last Arab.

In addition to Hezbollah, Iran has deployed up to 20,000 fighters in Syria drawn from Iranian-controlled militias manned by Iraqi, Afghan, and Pakistani fighters.

Hezbollah, as Iran’s chief surrogate, already is portraying the military clashes as a victory. It released a statement announcing that the downing of the Israeli F-16 jet fighter is “the start of a new strategic phase” that will limit Israel’s ability to operate safely in Syrian airspace.

Iran has escalated its hostile actions against Israel and the U.S.-led coalition in Syria as the war against ISIS has wound down.

On Feb. 7, the United States launched air and artillery strikes against an armored column of pro-regime militias in Syria’s eastern Deir ez-Zor province that had attacked a base of the U.S.-backed Syrian Democratic Forces, where U.S. advisers were deployed.

The State Department issued a statement supporting Israel’s sovereign right to defend itself, but the Trump administration should amplify this message through a statement by Secretary of State Rex Tillerson or a high-ranking White House official.

Tillerson just embarked on a diplomatic trip to Jordan, Turkey, Lebanon, Egypt, and Kuwait, from Feb. 11 to 16. The deteriorating situation in Syria will be a major item for discussion at every stop.

Not only are all of these states concerned about the destabilizing spillover effects cascading out of Syria, but all of them are part of the 74-member Global Coalition to Defeat ISIS that will convene a summit in Kuwait at the end of Tillerson’s trip.

In addition to conferring with allies about how to defeat Iran’s challenge in Syria, Tillerson will need to focus on how to cement a permanent defeat for ISIS in Syria and Iraq.

The Trump administration already has announced that it will maintain a limited U.S. military presence in northeastern Syria to train and support anti-ISIS militias. It should ask U.S. allies to join in support of those plans and to cooperate to block the flight of thousands of foreign fighters seeking to return home after the defeat of the ISIS “caliphate.”

Only Washington can lead the broad coalition against ISIS and shape an effective and comprehensive multinational response to Iran’s hostile plans in Syria.

The bottom line is that both Israel and the United States increasingly are being drawn into the Syrian civil war, in large part because of Iran.

Tillerson’s prime goal on his current trip should be to chart a common course for a broad array of U.S. allies that are confronted with multiple threats emanating from Syria.

James Phillips is the senior research fellow for Middle Eastern affairs at the Douglas and Sarah Allison Center for Foreign Policy Studies at The Heritage Foundation. He has written extensively on Middle Eastern issues and international terrorism since 1978.