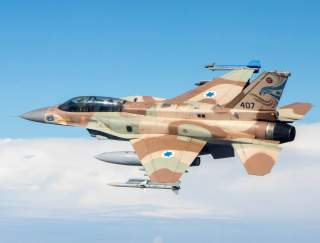 Since 2012, Israeli aircraft have launched dozens of air strikes on Syrian government, Hezbollah and Iranian Revolutionary Guard Corps forces in Syria. These attacks reached a new peak in May 9 when, in response to an Iranian rocket artillery attack, twenty-eight Israeli F-15s and F-16s launched more than sixty guided weapons at targets throughout Syria.

The destruction of the Pantsir-S1 (NATO codename SA-22), which you can see in this video, has aroused interest because it is a relatively up-to-date short-range air defense system. While Israeli fighters likely attacked it from beyond its retaliation range, the Pantsir is supposedly capable of shooting down cruise missiles—precisely the type of weapon used to destroy it.

In the video, the vehicle crew do not appear to react to the incoming guided munition, let alone shoot at it with its close-defense automatic cannon. While this would seem to be a failure of its infrared, optical and radar sensors, some Russian commentators have suggested the crew failed to be on alert despite the mass of Israeli airstrikes taking place, or that the vehicle had run out of ammunition—which seems unlikely.

The performance on May 9 was par for the course for Syrian Air Defense Force. Despite having well over eight hundred Soviet and Russian-built surface-to-air missile systems (SAMs) bound together into an integrated air-defense network supported by dozens of radars, Syrian SAMs have only shot down a single Israeli jet over years of air attacks, and failed to intercept mass cruise missile strikes on two occasions.

Admittedly, years of civil war have caused the loss of numerous fixed air-defense assets and sapped morale, logistics and training standards. One must also consider that Moscow has actually upgraded and put back into service many of the older Syrian SAMs, and deployed two batteries of its most advanced SAM systems to its base in Latakia—the S-300V4 and the S-400—as well as additional Pantsir-S1s for close defense. Though the Russian batteries are not supposed to engage Israeli aircraft, and are unlikely to shoot at U.S. aircraft (despite periodic threats to the contrary), the Russian radars have been linked to the Syrian air-defense system, thereby enhancing their radar coverage.

Nonetheless, Syria’s air defenses have had conspicuously little success despite considerable expense invested in them. Why?

Though the Israel Air Force has begun operating a few F-35 stealth fighters, it is unlikely they participated in the raid. Instead, radar-visible fourth-generation F-15 and F-16 jets likely used ‘standoff-range’ weapons, notably the Delilah cruise missile and Small Diameter Bomb. The Delilah is a small but highly precise munition that can be programmed to loiter while its ‘hunts’ a specific target, or be manually redirected by a human operator. The Delilah’s 160-mile range slightly exceed Syria’s longest-range air defense system, the S-200. The GBU-39 and -53 Small Diameter Bombs are 285-pound glide bombs with fold-out wings that can strike targets 50–60 miles away using GPS or thermal guidance.

Israel is tied with the United States for having the most experience combatting SAM systems—and those of Syria in particular. During the 1973 Yom Kippur War, Israeli F-4 Phantom and A-4 Skyhawk jets suffered heavy losses to an Egyptian integrated air defense network built along the Suez Canal. Israeli fighters eventually adapted by employing new tactics and electronic warfare systems, while ground forces went on covert raids across the canal to destroy the SAMs from the ground.

Nine years later, when Israel engaged Syrian forces in Lebanon, they confronted an integrated Syrian air defense network of thirty SAM batteries in the Beqqa Valley. On June 9, Israeli drones lured Syrian radars into revealing their positions, and then Phantom jets (escorted by F-15s and F-16s) launched radar-homing missiles at the batteries from long range. In a single day the Israeli jets wiped out all but one SAM battery and over eighty defending Syrians without suffering a single loss. Israel had mastered the art of SEAD.

In the current conflict, Israeli jets have also likely benefited from the cluttered airspace over Syria, over which numerous U.S., Russian and Turkish jets are flying which Syrian air defenses must takes pains not to shoot at.

The vast majority of Syrian SAMs are outdated, static S-75 (NATO code name SA-2) and S-125 (SA-3) SAM batteries, both with a range of a few dozen miles. The S-75 is most well known for its role shooting down U-2 spy planes and American jets over Vietnam, while the S-125 can be credited with downing an F-117 stealth fighter in 1999, mostly due to the cunning of a Serbian officer rather than any unique capabilities. Syria also possess mobile medium-range Kub (SA-6) and Buk (SA-11 and SA- 17) missile systems, as well as Strela (SA-9 and SA-13) and 9K33 Osa (SA-8) short-range systems. Syrian SA-8s have shot down numerous warplanes—when operated by anti-government rebels, that is.

The platform that appears to have caused Israeli jets the most trouble are Syria’s S-200 Vega-Es (NATO code name SA-5b Gammon), forty-eight of which were acquired from the Soviet Union in the early 1980s. The Vega-E can launch a huge, ten-meter long V-880 radar-guided missiles.

No less than four booster rockets propel the nearly eight-ton missiles to a maximum speed of eight-times the speed of sound to strike a target up to 150 miles away. Unlike earlier predecessors, the S-200 can guide up to five missiles at a time towards a target, though they are not designed to engage low-flying aircraft.

After Russia intervened in Syria, Moscow assisted the Syrian military in bringing the aging weapons back into operational condition. In September 2016 and March 2017, S-200s unsuccessfully sniped at Israeli jets attacking targets in Syria. In the latter incident, several S-200s missiles targeting Israeli fighters sailed into Israeli and Jordanian airspace, and Israel shot one down with an Arrow surface-to-air missile to prevent it from landing in a populated area.

Again in September 2017 an S-200 engaged an Israeli jet, but missed yet again. This time Israeli fighters retaliated by blowing up the S-200’s fire control radar with four bombs.

Finally, on February 10, 2018 an S-200 scored a kill in an incident detailed by aviation historian Tom Cooper. At 4 AM in the morning, an Iranian troops based at the Tiyas T-4 airbase in Syria deployed a Saegheh stealth drone (reverse engineered from a captured U.S. RQ-170) into Israeli airspace which was shot down by an IDF AH-64 Apache helicopter gunship. Israel then deployed eight F-16I fighters which blasted T-4 with cruise missiles and glide bombs.

However, Syrian air defenses launched 8–10 missiles at the encroaching jets. While most of the Israeli fighters dove low to the earth to evade, an F-16I flying high to perform a bomb-damage assessment was damaged by shrapnel from the 478-pound warhead of a V-880. Three or four additional V-880s were launched at the crippled jet, and its crew ejected over Israeli airspace apparently just moments before one of the missile struck. In retaliation, Israeli jets then blew up three Syrian SAM batteries, evading all fourteen additional SAMs fired at them.

This incident marked the first combat loss of an Israeli fighter in thirty-five years. The only other jet fighter shot down by Syrian air defenses during the civil war was a Turkish RF-4 Phantom reconnaissance jet downed over international airspace on June 22, 2012 by a Syrian missile of unknown type.

Of course air-defense technology has improved since the 1980s, and Damascus continues to seek longer-range S-300 missiles from Russia. However, on every occasion Israel has stridently protested to Moscow against such a transfer. In 2014, Israeli jets twice bombed alleged attempts to supply S-300 in Hezbollah and Syria.

However, Syrian SAMs have also been flung at drones, with occasional success. For example, in 2015 an American MQ-1 Predator drone was shot down by an S-125. The manufacturer of the Pantsir-S1 has claimed the system has shot down several Israeli, Turkish and American drones. Moreover, on January 2, 2018 Russian Pantsirs engaged a swarm of thirteen kamikaze drones streaking towards the Russian airbase at Hmeimim, destroying seven.

Drones are difficult targets to engage with systems designed to hunt airplanes. The same is true of cruise missiles, but many modern SAM systems claim to be capable of engaging them. However, in April 2017 and April 2018, Syrian air defenses seem to have completely failed to detect and engage a total of over 160 U.S., British and French cruise missiles.