Is it Time to Bring Containment Back? 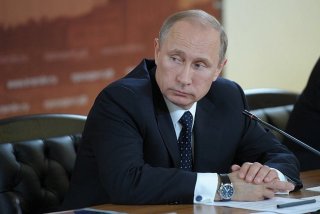 Since Russian forces first moved into Ukraine’s Crimean Peninsula in February, the United States’ approach has emphasized threatening Russia with diplomatic isolation and economic sanctions. Due to a combination of disagreements with European allies and a desire within the Obama Administration to avoid provocation, these threats have borne limited fruit, as Russia continues arming the separatists and threatening military intervention, even as Ukraine’s military has recently succeeded in dislodging the rebels from Slavyansk and some of their other strongholds.

Not only has the threat of sanctions been undermined by a lack of follow-through, it was always a dubious proposition whether economic pressure alone could change Russian calculations about Ukraine. Instead of concentrating on sanctions whose imposition looks increasingly unlikely, Washington should also develop a strategic response to the crisis, one centered on preventing the expansion of Russian influence in its neighborhood by bolstering the political and economic resiliency of vulnerable states, and providing them the military resources they need to resist Russian intervention. In addition to Ukraine, the highest priorities are Moldova and Georgia, though with a commitment to greater political reform in the future, this approach could also be relevant to states like Armenia, Azerbaijan, Kyrgyzstan, or even Uzbekistan that seek to bolster their sovereignty against Russia.

This approach, whose broad outlines are similar to the containment policy Washington pursued against the USSR for much of the Cold War, has the advantage of costing the U.S. comparatively little, and of avoiding the need to gain consensus among Washington’s European allies, who remain deeply divided on handling Russia.

The U.S., as well as its European allies, has already taken some steps to help these states address their political and economic vulnerability. Ukraine has received billions of dollars in aid, much conditioned on steps to tackle the corruption and market distortions at the source of its weakness. Similarly, the association agreements Georgia, Moldova, and Ukraine have negotiated with the EU provide for significant reforms to improve governance that will in the long run also strengthen the legitimacy of their governments.

Visiting Kyiv for the inauguration of new Ukrainian President Petro Poroshenko in early June, Vice President Biden announced an additional $5 million of U.S. aid to Georgia and $8 million to Moldova, bringing U.S. assistance to the two countries up to $65 million and $31 million respectively. While this aid is helpful and signals Washington’s growing interest, it remains comparatively small in scale. It also lacks lethal military assistance, which would provide a much stronger signal of U.S. interest and would help these states deter and if needed defeat Russian-sponsored separatism, thereby significantly raising the cost to Moscow of Ukraine-style interventions.

Largely because of their aspirations for closer ties with the West, Georgia and Moldova have come under increasing pressure from Moscow in recent months, even as the Russian-supported insurgency in eastern Ukraine shows no signs of fading.

In addition to ramping up economic pressure, Russia continues funding and supporting separatist movements and political parties throughout the region, whose states Moscow does not accept as fully sovereign. Russian-backed separatists in Moldova’s Transnistria region have appealed for annexation by Moscow. Separatist forces have also conducted military exercises with Russian troops who remain illegally stationed in Transnistria. Similar machinations are underway in Moldova’s Turkic minority inhabited Gagauzia region.

Though Georgia has been comparatively calm, Russia continues efforts to “borderize” the frontier between Georgia proper and the regions of South Ossetia and Abkhazia that Moscow recognized as independent states following the August 2008 war. Not only do these efforts reduce the likelihood that Tbilisi will ever recover the disputed regions, the Georgians see a creeping annexation of additional territory as Moscow pushes these boundaries further into Georgia. Russian aircraft have also violated Georgian airspace in recent months, while Moscow is covertly funding a range of pro-Russian groups and parties in Georgia.

The United States has an interest in preventing the expansion of Russian influence in the region for both moral and strategic reasons. The spark for Russia’s current de-stabilization efforts was the Ukrainian, Moldovan, and Georgian peoples’ attempts to forge a closer relationship with the West and to create more decent governments at home. Despite Moscow’s threats, all three have pushed ahead with their EU association agreements, and all are pursuing political reform, even as Russia goes in the opposite direction.

Yet officials and analysts throughout the region speak of becoming warier about taking risks to support the U.S., as Georgia has done with support for U.S. operations in Iraq and Afghanistan, because they increasingly question Washington’s willingness to protect them in turn.

Russian efforts to undo the progress Ukraine, Georgia, and Moldova have made in the last few years also represent a threat to broader U.S. interests. A Russian proverb states that “the appetite grows with the eating,” and the more Russia succeeds in rolling back U.S. influence in its neighborhood, the more its strategic aspirations will expand, and the more strident its recent anti-American turn will grow. The same is true in with other potentially revisionist powers such as China, who also view U.S. actions in Ukraine as weak.

Facing war weariness at home and an increasingly complex set of challenges abroad, the Obama Administration has been reluctant to offer a forceful challenge to Moscow’s expansionist aims. Administration officials too often present a false dichotomy between the current limited support and fighting a war with Russia. In reality, Washington has more robust options available that fall far short of military action.

Most important is ensuring that Georgia and Moldova, as well as Ukraine, succeed in their efforts to create functional, decent, and pro-Western states capable of maintaining their sovereignty in the face of potential Russian aggression. That means assistance budgets and high-level visits should be increased. It means stronger rhetorical support for these states’ rights to defend their territorial integrity, with force if necessary. Washington should in that sense give strong public support to Kyiv’s “anti-terrorist” operations in the east. It also means providing the Georgia, Moldovan, and Ukrainian militaries the capabilities they need to protect themselves, including especially anti-tank and air defense weapons, along with an offer of stronger military ties both bilaterally and through NATO. Signs that NATO’s upcoming Wales summit will see the alliance bolster its support for Georgia—including possibly deploying air defense systems—are a welcome development.

This policy of strengthening vulnerable states to resist Russian-sponsored subversion has a long pedigree: it was the original basis for the well-known Cold War policy of containment. In his famous 1947 “X article,” George Kennan called for “a policy of firm containment, designed to confront the Russians with unalterable counter-force at every point where they show signs of encroaching upon the interests of a peaceful and stable world.” While today’s context is different, that basic approach remains the right one for dealing with a Russia that rejects the legitimacy of both post-World War II international norms and borders inherited from the Soviet collapse.

To the end of his long life, Kennan argued that his ideas were misunderstood by top policy makers, leading the U.S. to get bogged down in conflicts such as the Vietnam War in regions not critical to U.S. national security. Rather than rushing U.S. forces to every country threatened by a Communist insurgency, Kennan believed that Washington should help these threatened states help themselves. In an era of straightened defense budgets and public exhaustion, it is Kennan’s version of containment, not that of his more hawkish successors, that Washington should follow in Eurasia.

In the late 1940s, Soviet expansionism, underpinned by Marxist-Leninist ideology, was a global phenomenon. Today, the expansionist tendencies of Vladimir Putin’s Russia are narrower, focused on the states of the former Soviet Union and based on an ideology of not much more than Russian nationalism, while Russia’s economy is not robust. Containment today is thus unlikely to lead to a four-decade Cold War, which Russia can hardly afford, but it can frustrate Putin’s efforts to forcibly drag the post-Soviet region back under Russian influence at relatively little cost to the United States.

Jeffrey Mankoff is deputy director and fellow with the CSIS Russia and Eurasia Program. He is the author of Russian Foreign Policy: The Return of Great Power Politics (Rowman & Littlefield, 2009) and a frequent commentator on international security, Russian foreign policy, regional security in the Caucasus and Central Asia, ethnic conflict, and energy security. Before coming to CSIS, he served as an adviser on U.S.-Russia relations at the U.S. Department of State as a Council on Foreign Relations International Affairs Fellow. From 2008 to 2010, he was associate director of International Security Studies at Yale University and an adjunct fellow at the Council on Foreign Relations.