It’s Back To The Future With Mobile Protected Firepower 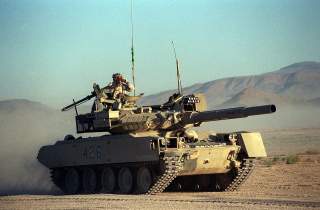 Every decade or so since the 1960s, the U.S. Army creates a requirement for what can nominally be described as a light tank. The only successful program in this area, and I use that term advisedly, was the M551 Sheridan. Weighing in at just 15 tons but armed with a 152mm gun that could fire both cannon rounds and the MGM-51 Shillelagh guided missile, the Sheridan was thought to be small and light enough to deploy and operate with paratroopers and armored cavalry units, and able to hold its own with enemy main battle tanks. It saw service in Vietnam with mixed results due in large part to the vulnerability of its aluminum hull to rocket-propelled grenades and anti-tank mines.

Since then, the thought leaders in the Army have tried repeatedly to develop, under various disguises, the equivalent of a new light tank. In the 1990s it was the M8 Armored Gun System (AGS). In the 2000s, the Future Combat System envisioned a whole family of such light armored fighting vehicles, including the mounted combat vehicle which would have carried a 120mm cannon. These efforts always fell afoul of excessive requirements, the lack of critical technologies, ill-defined operating concepts and, not surprisingly, defense budget cuts.

The Army is again attempting to build what might be described as a light tank, the Mobile Protected Firepower (MPF) vehicle. The Army’s basic problem is that it has too many infantry brigades and they lack sufficient mobile combat systems and indirect fire support. A commander cannot keep detaching heavy armored vehicles to support infantry. So the Army decided to provide their own mobile heavy firepower. As described in the Army’s 2015 Combat Vehicle Modernization Strategy:

a lodgment and preventing enemy counterattack. This vehicle is necessary to defeat local fortifications, point defenses, and blocking positions to maintain momentum. Without the combat

Fortunately, the Army is pursuing a smart acquisition strategy with respect to MPF. It is reining in requirements, and asking industry to draw on their past work and lessons learned to develop a relatively inexpensive vehicle. The Army needs a cost-effective, near-term fix for the firepower problem in its infantry brigades, not a technologically exquisite, and quite expensive solution that will take twenty years to develop and deploy.

Thus, the Army is seriously thinking of going back to the future. This means evaluating designs that draw on past developments. According to one Army source familiar with the requirements for the MPF:

“Our technological solutions to the limits of physics haven’t changed substantially since the AGS was cancelled in 1996. There have been some modest improvements, [e.g. in] drivetrains, transmissions… even a little bit in our protection, [but] I would call those incremental improvements and not game-changing.”

The Army’s Tank and Automotive Command, where requirements are hopefully turned into reality, wants to put this program on the fast track. They are learning from past failures and from the successes of other services in deploying improved capabilities in the near-term by relying on existing platforms and systems. According to Major General David G. Bassett, Program Executive Officer for Ground Combat Systems:

“We’re not willing to go through a lengthy bottom-up design process. We’re willing to give you time on your own to get a design ready to compete, and then we’ll evaluate that fairly rapidly in the engineering, manufacturing, development phase, not unlike what the Marine Corps did.

“We can learn a lot from the Marine Corps and programs like JLTV [Joint Light Tactical Vehicle], where we benefited greatly from the competition of more than one vendor.”

The Army wants the MPF sooner rather than later, so it is pursuing acquisition of off-the-shelf technology. This naturally has led the Army to the two premier armored fighting vehicles companies in the United States, General Dynamics and BAE Systems. Other companies are considering competing but would have a tough time against these two behemoths.

BAE Systems is proposing a close cousin of the M8 AGS. According to industry reports, the new candidate for the MPF role has a crew of three and an automatic gun-loading system. Modular armor allows its weight to vary between 19 and 24 tons depending on add-on force protection measures. Its low weight could allow the M8 to be air-dropped, something that Army planners seem to fancy. At around 20 tons each, three M8s might be squeezed into a single C-17 transport aircraft. Compared to the old version of the M8, the new one will benefit from three generations of improvements in electronics, sensors and power trains. One drawback to this option is the M8 can only take a 105mm gun.

General Dynamics Land System’s Griffin Technology Demonstrator is a hybrid of old and new. The Griffin will have a brand new, lightweight, aluminum turret holding and mounting the XM360 lightweight 120mm smoothbore gun. The XM360 employs an autoloader to reduce crew size. The turret will be placed atop an Ajax Scout Specialist Vehicle chassis, a vehicle procured for the British Army. According to reports, this configuration weighs in at 28 tons, minus additional force protection features. According to General Dynamics and the Army, the Griffin demonstrator is a “conversation starter” and would be modified based on Army feedback.

Although still in the early stages of prototype development, the U.S. Army hopes to field an MPF vehicle by the mid-2020s. The only way for this to happen, and for the product to be affordable, is by going back to the future and extracting from past efforts and even foreign programs every measure of value that can be squeezed out. The Marine Corps is doing this with its Amphibious Combat Vehicle programs and the Army did this with the Armored Multi-Purpose Vehicle. MPF will continue the trend of exploiting non-developmental items to put real capability in the hands of the warfighters in the near-term.