It's Time to Fix the Top Problem Plaguing Mexico 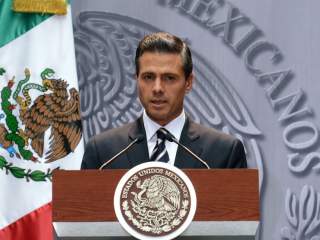 Corruption dominates Mexico’s headlines: helicopter rides for officials’ family members, housing deals from favored government contractors, the still unexplained disappearance of 43 students and a drug lord escaping a maximum-security prison, for the second time. In a recent survey, Mexicans listed corruption as the country’s top problem, ahead of security and the economy.

In absolute terms corruption eats away at Mexico’s growth. The think tank IMCO estimates the costs at $53 billion, or five percent of GDP. It increases the costs of doing business, with bribes for permits and government contracts tacking on up to ten percent according to Transparency International. And business owners face an uneven playing field—65 percent report that on at least one occasion a competitor offered a bribe or tapped personal relationships to win new business. By undercutting the market, corruption stifles excellence, deters investment and hinders growth.

Lastly, corruption delegitimizes the state and undercuts democracy. The belief by two-thirds of Mexican citizens that their taxes line the pockets of officials fuels the informal sector and limits the collection of government revenue necessary to provide public services: education, healthcare, and basic safety. And it threatens Mexico’s democratic gains. When citizens know about corruption and nothing is done—as is the case in Mexico, where impunity reigns—voter turnout falls.

The 2012 Pact for Mexico promised to combat the scourge. Yet while energy, finance, education and telecommunication reforms moved forward, anticorruption efforts languished. Initial PRI proposals in the senate did little to change the status quo, giving a new anticorruption body no autonomy or prosecutorial powers. The proposal that eventually reached the chamber of deputies failed to gain support from the PAN or PRD and was abandoned.

In 2014, as Mexicans mourned the loss of 43 students in Guerrero and consumed pictures of the first lady’s $7 million dollar abode, owned by contractor Grupo Higa (a similar if smaller house purchased for the finance minister would appear four weeks later), the PAN sent its own anticorruption bill to Congress. Written in conjunction with civil society groups, it proposed a new National Anticorruption System, created a new Court of Administrative Justice, strengthened the Federal Superior Audit Office, and increased Congress’s role through appointment oversight for the new anticorruption officials. Supported by the three main political parties and a majority of states, the president signed the constitutional reform into law last spring. Lawmakers now need to hash out the details in secondary legislation by May.

Civil society groups are pushing their own version of the implementing laws through a citizen-led Ley 3de3 initiative (allowed under the recent political reforms). The bill would require public officials to disclose their tax statements, assets and potential conflicts of interest. It would also explicitly and legally define corruption—encompassing bribes, using political influence for personal gain, and misusing public funds among other actions, and it would increase the investigatory, prosecutorial and sanctioning power of the new National Anticorruption System. The proposal needs 100,000 signatures for Congress to consider it; its advocates are hoping to get several times more than that to force it onto the agenda.

A challenge for Mexico is moving beyond Twitter, Facebook and Periscope to express society’s mounting frustrations. And that is the potential of Ley 3de3—to change the country’s anticorruption institutions and create tools for future reformers to take on bad behavior.

Shannon K. O'Neil is the Nelson and David Rockefeller Senior Fellow and Director, Civil Society, Markets, and Democracy Program, at the Council on Foreign Relations. This article first appeared in Development Channel.