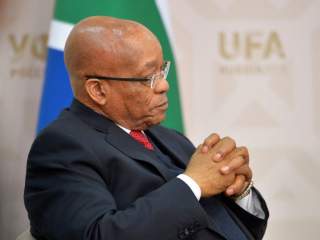 The South African government spent about $24 million on “security upgrades” to President Jacob Zuma’s private estate, Nkandla. Those “security upgrades” included a swimming pool, a chicken run and a football pitch. In 2014, Public Protector Thuli Madonsela investigated the expenditure and found some of it improper, and directed the president to pay back some—not all—of the public money spent on the estate. President Zuma refused, and was supported by his cabinet minister and the governing African National Congress (ANC) majority in parliament.

Zuma has long been accused of corruption, and the two largest opposition parties, the Democratic Alliance (DA) and the Economic Freedom Fighters (EFF) actively campaigned for Zuma to follow the direction of the public protector. The EFF staged unruly demonstrations on the floor of parliament. In early February, President Zuma proposed a settlement by which he would pay back some of the money, but the amount would be determined by the auditor general and the finance ministry. It is widely thought that Zuma’s settlement offer was motivated by his weak political position. He was wounded politically by his efforts to change the finance minister, the fall in commodity prices and a decline in the value of the national currency. His ANC faces important local government elections this year.

However, the opposition parties refused to accept the offer. Instead, they are proceeding with a suit in the Constitutional Court. The purpose of the suit appears to be to strengthen the hand of the public protector. Zuma and his allies had claimed that the public protector’s findings were only advisory, and not binding.

The Office of the Public Protector is established by the Constitution of South Africa. Its mandate is to investigate misconduct in any aspect of state affairs and all spheres of government. It is a so-called “Chapter 9” body—entities established by the constitution to protect citizens from bad governance and human rights violations. Chapter 9 institutions are part of a system of checks and balances designed to limit the power of the executive and the legislature. As such, it is independent of government. If the Constitutional Court finds that the public protector’s findings are binding in the Nkandla case, all Chapter 9 institutions will be strengthened, and the authority of parliament and the presidency reduced. Many in the ANC see parliament as the most important institution in a democracy. The opposition parties, on the other hand, are concerned more about the rule of law which Chapter 9 institutions promote.

The DA is a center-right party associated with South Africa’s racial minorities; it is trying to attract support from the black majority. The EFF is a radical, left-wing party that uses anti-white rhetoric and has, among other things, called for the expropriation of white-owned property. The two parties are strange bedfellows, but both want to get rid of Zuma and both want to strengthen the hand of the public protector. Julius Malema, the EFF chieftain, was once a political ally of Zuma. Since their falling out, and Malema’s expulsion from the ANC, the latter’s animus against the president is palpable and personal. It is likely that the EFF hopes that the Constitutional Court will rule that by not implementing the public protector’s findings, President Zuma violated his oath of office: to uphold the constitution. Should that happen, the EFF and most of the other opposition parties are likely to demand Zuma’s impeachment. That almost certainly will not happen because the ANC retains a large majority in parliament. But, the effort will further wound Zuma and the ANC in the run-up to the local elections.

John Campbell is the Ralph Bunche Senior Fellow for Africa Policy Studies at the Council on Foreign Relations. This article was first published in Africa in Transition.