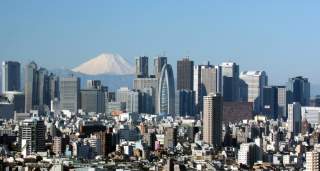 There is, at long last, a solution to the troubles that beset the Japan-ROK relationship: patience. In this case, patience doesn’t mean waiting a couple of months or a year until the leaderships in Tokyo and Seoul recognize the damage they are doing to their relationship; nor does it mean waiting a few years until new governments take office in each capital; neither does it mean waiting a few generations until the anger and animosity burn themselves out. No, patience in this case means waiting 600 years or so, when the population of South Korea vanishes and another half century when that of Japan does the same.

A recent simulation commissioned by the ROK National Assembly extrapolated current demographic trends – the average South Korean woman bears 1.25 children, well below the replacement rate of 2.1 children – to show that the South Korean population will disappear by 2750. Japanese celebrations will be muted: the average fertility rate there is just 1.4 children per woman, meaning that the Japanese population will vanish around 3100. Japan will only outlast the ROK because its current population is almost twice that of the ROK.

These trends are not immutable. Both countries, which have been largely closed to outsiders, could become more accepting of foreigners.  Policy changes should expand choices that women have when it comes to child rearing. The Korean Peninsula could reunify, which would offer the ROK a fertility boost.

But shifting these two nations’ demographic trajectories requires a better understanding of why birth rates are falling and the explanations are complex: there isn’t a single answer. The same trend is evident in all developed societies. While Japan and South Korea (and China, in one of the little noticed developments that could have the most profound impact on that country’s future) are among the “grayest” countries in the world, the same phenomenon is evident across Northern Europe and in the south as well. It appears that a more developed society has less need for children and birth rates inevitably fall.

There is more at work here than some random side effect of industrialization, however. In some cases, women refuse to have children because they want a different role for themselves than that of their mothers and grandmothers. They want to work as well, and shortages of care facilities as well as societal expectations of women with children – they are supposed to stay home – provide powerful disincentives to have children. In some cases, the issue is not just child rearing but the entire set of assumptions about a women’s role in the home. In other cases, the cost of a child (over his or her lifetime) is too high for families that face growing uncertainty about economic prospects.

In Japan, it has been suggested that changing behavior among men is partially responsible, with researchers noting a growing number of males uninterested in marriage, and some even shunning sex. Other researchers attribute the lack of interest in women to the country’s stagnant economy: men are reluctant to marry for fear that they can’t support their future wives.

Both countries are unlikely to go the way of the dinosaurs. But demographic change will have a profound impact on both Japan and South Korea in ways that will affect many of the most important debates about the two countries’ foreign and security policies. Let me highlight three:

First, birth rates have a significant impact on government accounts and pension and insurance programs. As populations age and get smaller, a decreasing number of workers must support a growing number of retirees. Existing retirement schemes will not have the money to remain solvent. They can be adjusted but it will not be easy: governments will be tinkering with the most fundamental elements of the social contract. A larger retired population will burden welfare programs and be paying less to government coffers; all government budgets will be strained.

Second, and related to that, an increasingly elderly population will have very different policy preferences from those of a younger cohort. For example, they are more likely to favor health care over military spending and international security (especially when they are seen as binary choices: a government can either pay for more doctors or a high-tech missile defense system). Moreover, older voters turn out in much higher numbers than do younger ones – they express their preferences.

Finally, older populations are more risk averse and this tendency can color an entire society. It will restrain a government’s outlook toward the world, obliging it to eschew provocative actions, an important consideration in a region dotted by territorial disputes. The readiness to invest (and perhaps expend) a country’s most precious resource – its young people – in military adventures will diminish. More generally, an older society is going to be more conservative, staid, and status-quo oriented in all things. This will undercut economic and social dynamism.

Demography isn’t destiny, even if it does explain about two-thirds of everything. The projections of the eventual “extinctions” of South Korean and Japanese society are valuable reminders of the folly of straight-line extrapolations, a remarkably popular tendency in other areas of analysis in East Asia. That doesn’t mean that the demographic realities in Northeast Asia can be dismissed. Aging societies will have an immeasurable yet discernable impact on long-term national capacity and capability. Those governments, and their partners and allies, should be planning accordingly.