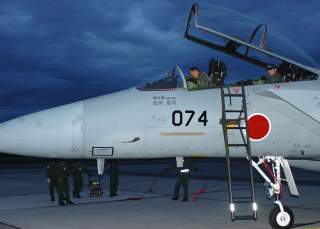 Throughout the postwar period, the Government of Japan's (GOJ) definition and interpretation of collective self-defense and Article 9 of Japan's constitution have played a crucial role in how its leaders develop and employ military power. This issue also has had significant implications for its political and security relationship with the United States.

Japan has arguably been alone among sovereign states in self-imposing a ban on exercise of the UN-sanctioned right of "collective self-defense," despite recognizing that it too possesses this right. The crucial factor has been the government's official interpretation of Article 9 of the constitution, which basically renounces war as Japan's sovereign right and forbids it from threatening or using force to settle international disputes.

That Japan's constitution has never been revised is widely known; but the GOJ's interpretation of Article 9 has changed significantly over time, however. Indeed, there is precedent for effective 'reinterpretation' of Article 9 in response to changing circumstances within and outside Japan. After the Korean War, Tokyo effectively (re-)interpreted the definition of the term "war potential" prohibited by Article 9 to allow "that which does not exceed the minimum necessary level for self-defense." This paved the way for the establishment of the Self-Defense Forces (SDF) in 1954. By 1957 even nuclear weapons were deemed constitutional, provided they stayed within the scope of the new interpretation - i.e., of "minimum necessary level for self-defense" - a vague concept subject to political interpretation. These weapons have been eschewed, however, primarily for domestic political reasons. Other weapons GOJ defined as "offensive" (kogekigata), such as aircraft carriers, ICBMs, and strategic bombers, in contrast, were - and still are - deemed explicitly unconstitutional.

So, while the actual text of Article 9 remains unchanged, its interpretation has in practice been shaped by changing external conditions, weapon technologies, and shifting political winds at home. Also relevant today, there is precedent for prime ministers personally spearheading shifts in reinterpretation - in contradiction of the powerful bureau effectively tasked with interpreting Article 9: the Cabinet Legislation Bureau (CLB). For example, as Richard Samuels notes, early in the Cold War, motivated Prime Ministers Yoshida Shigeru and Kishi Nobusuke (Abe's grandfather) effectively shaped significant changes in policy by pressuring CLB bureaucrats. The results? The SDF itself and nuclear weapons, respectively, were deemed "constitutional." Restrictions have in effect been further loosened over time. Most recently, some critics have called Japan's past replenishment operations in the Indian Ocean and air transport operations, as well as its involvement in anti-piracy patrols in the Gulf of Aden de facto exercise of the right of collective self-defense. In effect, what has already taken place at these key inflection points is "constitutional reform through reinterpretation" (kaishaku kaiken).

Despite being unable to generate sufficient support for constitutional revision and moving instead to 'reinterpretation,' domestic political winds still do not appear to be shifting in Abe's favor. Public opinion is mixed, at best. A mid-June Kyodo poll revealed that 55 percent are opposed (up from 48 percent in May). Although the tactic is controversial, even some opponents concede that Abe's push to reinterpret Article 9 by Cabinet resolution is within his right as a democratically elected leader, particularly one whose views were well-established before the LDP's landslide 2012 election victory brought him to power.

Nor is support for reinterpretation of the constitution limited to so-called "hawks."  Although the specifics of proposals differ, the idea of moderate changes to interpretation and/or revision of Article 9 itself has support across the political spectrum. The key points seem to be how to revise the constitution/reinterpret the constitution - and on these matters views vary widely. Although exercise of the right of collective self-defense is often presented by analysts as a simple binary choice for Japan - 'yes' or 'no' - the practical significance of any reinterpretation will be contingent on its specific content.

In May, the Abe administration listed more than a dozen scenarios for threats that it argues Japan could address more effectively by exercising the right of collective self-defense. These include: defending US ships on the high seas, protecting foreign troops involved in UN peacekeeping operations, minesweeping operations in international sea lanes (e.g., the Strait of Hormuz), and shooting down a North Korean missile fired at the US. As the intense negotiations between leaders in the LDP and its far more cautious New Komeito coalition partner suggest, however, even if Abe pushes through reinterpretation the Cabinet resolution itself and subsequent legislation will be watered down. For example, in response to New Komeito resistance the Cabinet set aside the issue of participating in UN-sanctioned collective security operations requiring military force. It has also incorporated more restrictive language on three new conditions for exercising the right; e.g., the right is to be exercised only when there is an "impending danger" threatening "Japan's existence" (kuni no sonritsu).

Bringing balance to the force[s]?

There is strong support for reinterpretation of Article 9 in Washington, where Japan's self-imposed ban on exercising the right of collective self-defense has for decades been seen as a major obstacle to expanded and more effective alliance cooperation. Accordingly, in April President Obama praised Abe "for his efforts to strengthen Japan's defense forces and to deepen the coordination between our militaries." Many supporters view reinterpretation as major progress toward a more "equal" (taitona) alliance and toward mitigating longstanding 'abandonment' fears in Tokyo. Timing is also key. Tokyo and Washington are negotiating the first revision of the Guidelines for US-Japan Defense Cooperation since 1997, with the explicit objective of "expanding security and defense cooperation in the Asia-Pacific region and beyond."

Beyond the alliance: concerns abroad

Whereas Abe's efforts have received public support from US treaty allies Australia and the Philippines, recent statements from Beijing and Seoul, as well as editorials in media in both countries, provide grounds for concern that reinterpretation may exacerbate regional tensions. China's foreign ministry has said China will be "highly vigilant as to Japan's true intentions."  Less diplomatically, earlier this week the deputy chief of the PLA's General Staff placed reinterpretation in the context of what he called a resurgence of Japanese militarism and efforts to accelerate Japan's "military buildup" (kuochong junli) and "to destroy the post-war international order" (pohuai zhanhou guoji zhixu). Seoul's official position appears moderate: it acknowledges collective self-defense as Japan's sovereign right but stipulates that it will not tolerate SDF involvement in a potential conflict on the Korean Peninsula without a direct request from Seoul.

Regardless of the specifics, reinterpretation without effective engagement with neighbors may backfire, making Japan more insecure. As former deputy minister for foreign affairs Tanaka Hitoshi, who supports a limited reinterpretation, has argued, "security policy changes not coupled with diplomacy may [.] worsen the overall regional security environment."

Reinterpretation of Article 9 to allow for the exercise of Japan's right to collective self-defense has the potential to spark major changes in Japan's security policy and political and security relations with other countries - above all the United States, but also US allies such as Australia and the Philippines. Much will depend on the actual content of the Cabinet resolution, as well as how the reinterpretation itself is interpreted in subsequent legislation and security policy decision-making, especially concerning the forthcoming US-Japan Guidelines revision. A June 16 preliminary draft of the proposed Cabinet resolution notes "fundamental changes in international conditions surrounding Japan" (wagakuni wo torimaku kokusai josei ga konponteki ni henyo shi) and states that "no country can protect peace by itself" (dono kuni mo ikkoku nomi de heiwa wo mamoru koto ha dekizu). This suggests the Tokyo government will present collective self-defense as needed to meet the condition of 'minimum necessary level for self-defense.'

Yet how much will change in practice is unknowable at present. Resistance from the Japanese public, opposition parties, and even within the ruling coalition, together with foreign reactions, is sure to play a significant role in determining Japan's path forward - a path that is not - despite all the effort by the Abe administration - all that clear.

Dr. Adam Liff is a research fellow at the Harvard Kennedy School's Belfer Center. This autumn he will become a postdoctoral fellow in the Princeton-Harvard China and the World Program and an assistant professor at Indiana University's newly established School of Global and International Studies (SGIS). Dr. Liff is also a former SPF Non-Resident Fellow and Pacific Forum CSIS Young Leader. This article was first published by CSIS: PACNET here.