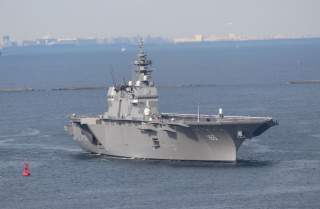 The Land of the Rising Sun has been quietly strengthening its military capabilities and procuring advanced equipment amid the ongoing debate over whether to amend Article 9 of the country’s constitution. Though officially called the Japan Maritime Self-Defense Forces (JMSDF), the Japanese Navy boasts an impressive array of hardware and if the country’s ruling party has its way with the constitution, its capability will only get stronger.

To increase the potency of the JMSDF even further, the acquisition of aircraft carriers (CVs) would be a logical next step. Yet, as CVs can best be described as seagoing airbases with significant offensive capabilities, Japan’s pacifist constitution prohibits their use in its navy. Destroyers (DDs) on the other hand rely on speed and maneuverability and are easily employed in defensive roles, criteria deemed acceptable under the Japanese Constitution. Therefore, to accommodate this unique political limitation, the Japanese have designated one of their latest vessels as a “helicopter destroyer” (DDH) but with capabilities akin to those of an aircraft carrier.

Enter the vessel in question: the JS Izumo (DDH-183), commissioned on March 25th, 2015. Officially classified as a $1.2 billion “helicopter destroyer”, this warship is the largest constructed by Japan since the Second World War, and at first glance bears a striking resemblance to a light aircraft carrier. With an impressive length of 248 meters and a beam of 38 meters, the vessel is larger than short take-off and vertical landing (STOVL) carriers operating in the Spanish and Italian navies. Likewise, its fully-loaded displacement of 24,000 tonnes and 7.3 meter draft put the Izumo class in a category similar to that of the Invincible class carriers commissioned by the Royal Navy. Altogether, the scale of these vessels represents a major advance in Japan’s maritime defense capabilities, significantly increasing the country’s ability to project force.

Equipped with the latest in electronic warfare, fire control, and radar systems, the Izumo class has been designed with the battlefield of the 21st century in mind. According to Janes Defense, the Izumo class will carry up to 14 helicopters- primarily Japanese-built MCH-101s and SH-60Ks equipped for anti-submarine warfare or search-and-rescue operations. For closer encounters, the Izumo is equipped with the Phalanx and SeaRam close-in weapons systems (CIWS), capable of defeating most forms of incoming ordnance.

Furthermore, the Izumo class boasts the exceptional capability of supporting amphibious assault operations as the ships have the capacity to embark up to 400 marines and approximately 50 light vehicles. However, unlike the American Wasp-class, the Izumo is not equipped with a well deck and relies on its compliment of helicopters to provide embarked marines with the ability to rapidly deploy in amphibious operations.

The Izumo will be supplemented by the JS Kaga (DDH-184),launched in late-August 2015 and expected to be commissioned sometime in 2017. Named after the Japanese province, the second ship of the Izumo class has the dubious honor of sharing the same designation as the infamous IJN Kaga- an aircraft carrier that took part in the surprise attack on Pearl Harbor in 1941 and served with the Imperial Japanese Navy until scuttled at the Battle of Midway in 1942. Unsurprisingly, the choice in name has raised eyebrows given the current Kaga’s aircraft carrier-like appearance.

Though the Izumo and her sister ship Kaga lack catapults or a “ski-jump” to assist conventional fixed-wing aircraft (such as the F/A-18) during take-off and arrestor cables for their recovery, the potential for operating STOVL aircraft from these vessels is high. For instance, in addition to greater size, major alterations were made to the design of the flight deck from Japan’s previous Hyugaclass of helicopter destroyers. The new Izumos remove obstacles from the flight deck and rearrange equipment that would prevent the launch and recovery of fixed-wing aircraft. The CIWS system mounted on the foredeck of the Hyuga class has been moved well to the side, opening up the much needed space necessary for fixed-wing operations. Moreover, the aft vertical launch silo has also been removed, allowing for greater ease of aircraft recovery. By and large, changes such as these are critical for allowing the vessel to operate fixed-wing aircraft.

Should Japanese leaders decide to include a compliment of fixed-wing aircraft on the Izumo class, STOVL or vertical take-off and landing (VTOL) aircraft would be necessary as the ship’s basic design lacks the size of catapult assisted take-off barrier arrested recovery (CATOBAR) carriers. Though currently slated to be delivered to the country’s air force, domestic production of the Lockheed-Martin F-35A JSF is already underway in Nagoya. It is unclear, however, whether Japan will produce or purchase the F-35B- the model of the JSF with the STOVL capability necessary for the aircraft to operate from any Izumo class vessel.

To accommodate the JSF, a few key modifications to the class would be necessary. Thermion coating, like that used on the Wasp class, would need to be applied to protect it from the extreme heat created by the F-35’s exhaust during vertical landing. Second, a ski-jump similar to those employed on most European carriers would likely be needed to assist the JSF during take-off, though this is not an absolute necessity aspreliminary testing on the Wasp class has demonstrated. Moreover, since Japan has ordered the V-22 Osprey, its addition to the ship’s complement is likely. Should a complement of F-35’s and V-22’s be added to the Izumo and Kaga, Japan would boast an increased maritime strike capability, signaling Japan’s increasing military power to its rivals.

Overall, the capabilities of the new Izumo class “helicopter destroyers” represent a step up for the JMSDF. Though in their current configuration the vessels are not capable of fielding conventional fixed-wing aircraft, with minor adjustments and a compliment of STOVL aircraft, the Izumo class would boast similar capabilities to light aircraft carriers currently serving around the world.

Given this potential, simply calling these ships “helicopter destroyers” could be construed as misleading, or even deceptive. Therefore, we can surmise that the classification is largely for political purposes, as the inherently offensive capability of aircraft carriers would run counter to the values espoused in Article 9 of the Japanese Constitution. Whether the JMSDF decides to further develop the capability of these ships has yet to be seen; however, the potential is there and serves as a warning to China and the DPRK that Japan is indeed a maritime power to be reckoned with.