Japan's Master Plan to Defend Itself from China 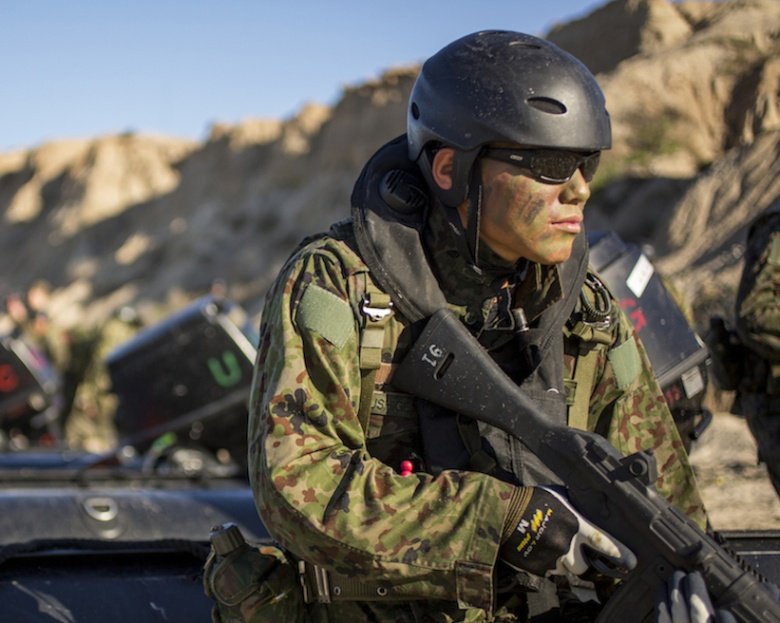 For decades, Tokyo’s plans to defend the homeland were frozen in amber. During the Cold War it was assumed, that in the event of war the Soviet Union would invade the northern one-third of the country. A powerful tank corps to contest a Soviet landing, a strong air force to beat back city-destroying bombers and a strong destroyer force to keep open the sea-lanes would be all that was needed to hold out until the Americans arrived.

The defense plan staggered on after the end of the Cold War like a zombie, even after the evaporation of the Soviet threat, for lack of anything better to plan for. Now the rise of the Chinese military and Beijing’s claims on what Japan calls the Senkaku Islands have Japan reorganizing its forces to face new potential threats to the south.

Sino-Japanese relations were relatively good for decades, even as China’s defense budget grew a solid 10 percent annually for eighteen years. In 2010, Beijing abruptly began to press its claim to what it calls the Diaoyu Islands, also known to Japan as the Senkaku Islands. Suddenly, China’s defense buildup—including Type 071 amphibious ships and a new fleet of destroyers and frigates—began to look a lot more menacing than a nonexistent Soviet Union.

The so-called “Dynamic Defense Plan” is a total turnaround, in practically every way. Instead of the northern island of Hokkaido, Japan’s focus is on the the southern Senkaku and Ryukyu island chains. While the old plan envisioned a tank-heavy defense centered around the Seventh Armored Division, the new plan involves a newly created brigade of rapidly deployable marines.

The core of the new defense is the new Amphibious Brigade. The brigade will be based on the southern island of Kyushu at Sasebo, close to Japanese—and American—amphibious ships. The brigade is slated for initial operational capability in 2017 with two thousand personnel, ramping up to three thousand as trained personnel become available.

The nucleus of the brigade will be the Japan’s Western Army Infantry Regiment (WAIR), a battalion-sized light infantry that has become the brain trust of Japan’s amphibious knowledge. The WAIR has participated in the biennial Iron Fist and Dawn Blitz amphibious exercises with the U.S. Marine Corps since 2000, slowly ramping up Japanese training in landing operations as insurance against precisely this sort of contingency.

The Amphibious Brigade will consist of three marine infantry battalions supported by the new Maneuver Combat Vehicle, a brand-new 8x8 wheeled armored vehicle with 105-millimeter gun designed to provide mobile fire support to Japan’s light forces. Tactical lift for the brigade will come in the form of thirty Assault Amphibious Vehicles (AAVs) purchased from the U.S. Marine Corps and refurbished by BAE Systems. This will give the brigade the rough equivalent of a USMC Assault Amphibian Company and the ability to put an entire battalion ashore by armored vehicle. The AAV, while obsolete, was the only available choice until the American Amphibious Combat Vehicle program is sorted out.

The brigade will also be equipped with seventeen V-22 Osprey tiltrotor aircraft. The Ospreys will enable another company’s worth of marine infantry to conduct airmobile operations, their range extended by Japan’s six KC-130 tanker aircraft. The First Airmobile Brigade, based in Chiba, can also cross-attach H-60 medium transport, CH-47J heavy transport and AH-64J attack helicopters as needed for additional support.

Meanwhile, the Maritime Self Defense Force is gearing up to support the brigade. The MSDF has three Osumi-class landing ships, tank vessels that can transport the brigade and its vehicles by sea. Each LST has a full-length flight deck for helicopters and a well deck that typically carries two American-designed LCAC hovercraft. The well deck can also “float out” AAV vehicles, each carrying up to eighteen brigade troops, for a beach landing.

Airmobile operations have become a cornerstone of amphibious warfare, and the SDF will be no exception. The MSDF has experimented with using its Hyuga-class “helicopter destroyers” as helicopter troop carriers. During the 2015 Dawn Blitz exercises, a Hyuga ferried both AH-64J and CH-47J helicopters from Japan to the California coast, then acted as a floating helicopter base just as the USS Ronald Reagan did during the 2011 tsunami and earthquake emergency. Japan’s V-22 Osprey tiltrotors will also be able to operate off the Hyugas.

Part of the dynamism of Japan’s new defense strategy is the need to rapidly deploy forces across Japan’s archipelago. Japan consists of 6,852 islands, and garrisoning all of them is an impossible task. Rather, Japan is scattering observation posts and radar stations across the southern island chains, in order to give advance warning of potential attack. Only four islands in the Ryukyus will actually have troops based on them—Yonaguni, Amami-Oshima, Ishigaki and Okinawa—while the rest will remain undefended.

How would Japan’s new doctrine be employed in a crisis? The Senkaku Islands are small and considered uninhabitable, so any ground defense of the island would likely rely on the Amphibious Brigade quickly sending a landing party via Osprey. A larger force could be dispatched from Sasebo by ship as reinforcements, and sailing at twenty knots would arrive within twenty-eight hours.

If the enemy managed to occupy Japanese territory, the location would determine the nature of the response. If the landing were on one of the Senkakus even a platoon could take it back from an enemy battered by naval gunfire, but if it were in the Ryukyus—many of whose islands are populated—a battalion or even the full Amphibious Brigade would be necessary.

As the first step toward liberation, the occupied island would be placed under naval blockade to isolate the defenders from outside support. Prior to the landing brigade forward observers, trained to direct air and naval gunfire support by their U.S. Marine Corps during exercises on Catalina Island, would direct the five-inch guns of Japanese destroyers onto enemy positions. AH-64J Apache helicopters would operate off the Hyuga-class helicopter carriers to attack ground targets much as British Apaches operated off HMS Ocean during the intervention in Libya.

Finally, a landing of AAV7s carrying infantry and LCACs carrying Mobile Combat Vehicles would be carried out on an unopposed location on the island, with the Marine unit moving to make contact with the enemy over land. If the island were large enough, a supporting airmobile assault would be plausible.

Japan’s new dynamic defense strategy is designed to provide security with a minimum amount of new expenditure. To pay for the creation of the brigade, Japan plans to do away with the bulk of its main battle tanks which are of little use in the new island-hopping campaigns anyway. Brigade troops will be drawn from disbanded units, and the entire SDF is projected to grow by less than a thousand personnel. The result however will be a more flexible, rapidly deployable force capable of operating on the battlefields of tomorrow.