Japan's Military Has Some Serious Problems (As China's Military Gets Stronger) 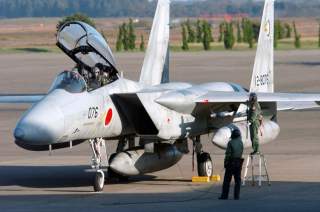 In late August, the Japan Ground Self Defense Force (GSDF) held its annual ‘Fuji Firepower Demonstration’ at a training area near Mt. Fuji.

During this event, the GSDF shoots off tons of ordnance and ammunition and puts its troops ‘into action’ with helicopters, tanks, and other hardware.

The impressively orchestrated performance draws tens of thousands of Japanese spectators – most apparently unaware they are observing what is, in effect, high-priced ‘kabuki’ that masks serious national defense shortfalls.

This year’s event simulated an ‘island re-taking’ scenario, an operation hard to replicate at a landlocked training area.  The GSDF always puts on a good show and the troops are professionals. But one might leave with the wrong impression; specifically, that the Japan Self Defense Force (JSDF) is a finely tuned force capable of defending Japan.

Instead, the event is a reminder that the JSDF is less than the sum of its parts, and it highlights a number of GSDF and JSDF shortcomings.   The Japanese Government (GOJ) needs to remedy these shortcomings, lest it find itself militarily impotent in the face of its powerful and belligerent Chinese neighbor.

In other words, GOJ must fix these problems or face probable strategic military defeat – perhaps without a shot being fired.

The GSDF is building an amphibious capability in the form of an Amphibious Rapid Deployment Brigade (ARDB).  China verbally and physically threatens Japan’s Southwest Islands, the Nansei Shoto, so Japan is taking the steps needed to counter this threat. However, the effort is a curious mix of the serious and the half-hearted.

A part of GSDF leadership resists the idea of a mobile, amphibious GSDF working jointly with the Maritime and Air Self Defense Forces to defend Japan’s southern islands from Chinese aggression.

Among some key JGSDF officers, nostalgia still lingers for GSDF’s historic emphasis on armored forces defending Hokkaido from a Russian invasion. This friction reportedly played a role in the forced, early retirement of the GSDF’s two leading reformers a year ago. Both officers are sorely missed.

The ARDB concept and the proposed structure are adequate, but there are serious doubts about the Japanese Navy and Air Force properly supporting the development of the amphibious brigade and its operations in Japan’s Southwest Islands.

This is because the GSDF, MSDF, and ASDF do not practice ‘jointness’; in fact, Japan’s ground, sea, and air forces generally resist working together.

This lack of ‘jointness’ remains the JSDF’s fundamental weakness.  It’s puzzling: everyone knows it’s a problem but nobody will do much about it.  Even more puzzling is that most JSDF officers attend the same military academy, but upon graduation become captives of their service culture and avoid cooperating as often as not.

The GSDF and MSDF have made some useful progress in the last few years, as manifested in the Dawn Blitz exercises off southern California and several other similar exercises. But more commitment is needed, as keen observers noted at the ‘island re-taking’ demo. The ASDF made an appearance at Mt. Fuji, with a F2 fighter showing up and ‘firing’ an imaginary anti-ship missile, but this token appearance should not be mistaken for ‘close air support’ or interest in either joint or amphibious operations.

Symptomatic of the JSDF’s inadequate ‘jointness’, electronic communications between the services remain a serious flaw. Indeed, it is probably just as well the ASDF and MSDF were mostly absent at the Fuji Fire Demonstration, as it would have been too hard to talk to each other.

This too is no secret, nor is it hard to solve. One was suggested, only half tongue in cheek, that the Minister of Defense send the three services’ top communications officers to a Tokyo electronics store with a credit card and orders to “fix things, or else!”: the problem could be solved in an afternoon.

Japan’s defense budget has been underfunded for decades and, among other serious shortfalls, that means inadequate funds for training. Indeed, one cringes watching GSDF shoot off so much ammunition at what is effectively a ‘PR’ exercise when they don’t have enough for ‘real’ training, and even the adequacy of ‘war stocks’ is questionable. Inadequate defense funding creates a readiness ‘death spiral’ of insufficient training time, inadequate aviation flight hours, lack of ability to fire assigned weapons, unrealistic field training, and critical personnel shortages.

And when funding is short, as it always is for the JSDF, the services are even less willing to cooperate with each other. Beneath a veneer of polished geniality, each views its rival services the same way hungry cannibals eye each other.

The GSDF put up some nice-looking hardware on display at Mt. Fuji, but Japan’s defense procurement strategy is not a well-thought-out, ‘requirements-based’ effort to buy or develop what Japan actually needs to defend itself – and enough of it. It often seems like a jobs program for Japanese industry, and with government ministries – MOF, METI, and MOD – too often working at cross-purposes and seldom asking the JSDF what it thinks.

One might characterize Japan’s military procurement as “buying a little of this, a little of that, overpaying, and hoping the scary things in the neighborhood go away – and if that doesn’t work, the Americans will take care of things.”

The JSDF’s basic problems are easy to understand, as are the solutions–but are seemingly intractable to solve.  Nevertheless, here are a few suggestions:

Develop a genuine ‘joint’ capability for the JSDF.  Japan has three perfectly good military services.  Force them to cooperate and they will be exponentially more useful.

Somebody with enough clout needs to make this happen.  If they can’t find senior military officers who will support the effort and cooperate with each other, simply fire them until such officers appear –- as they certainly will.

If JSDF needs a concrete mission to force ‘jointness’, developing the amphibious force will do, since amphibious operations are, by definition, ‘joint’ operations.

Spend More and Spend it Right:

Increase defense spending. How much? About $5 billion more a year for five years. Any number of Japanese officials and politicians will claim this is impossible, owing to Japan’s “severe fiscal condition”.  This excuse works well on the Americans.However, $5 billion is nothing in the context of Japan’s $4 trillion economy. Properly funding Japan’s defense forces costs about the same amount as a couple of unnecessary public works projects.

When GOJ wants money, it always finds it. Despite insisting it has not got five cents extra to spare for defense, GOJ recently found well over $100 billion to re-stimulate the economy – for the umpteenth time, along with another $30 billion for aid to Africa.

Where should the extra money go? First, spend it on improving JSDF salaries and living conditions. These are borderline third-world. Indeed, one marvels at the professionalism of the GSDF (and the entire JSDF for that matter) despite decades of under-funding, absurd restrictions on what it can do, and belittling by Japanese officialdom, politicians, academia, and most of the media.

Second, ensure adequate training budgets, so the JSDF can train properly. Lack of funds is a common refrain when the Japanese decline invitations to exercises and other events.

Do not use the extra money for hardware. Defense industries in all countries resemble sponges, able to absorb any amount of money. Add $5 billion to defense spending and the cost of hardware will miraculously increase by $5 billion. Japan’s defense procurement needs to be revamped, but that can’t be done by throwing more money at the problem.

These observations are not new. What will it take for Japan to ‘wake up’ and improve its defense? If PRC’s aggressiveness, belligerence, and the PLA’s vastly improved defense capabilities over the last decade have not been enough, one worries nothing short of the Chinese opening fire will do the trick.

The Americans can do more to encourage, and if necessary, push Japan. For too many years, the U.S. was content with Japan doing less than it needed to do. Understandably, Japan got used to counting on the Americans to make up the shortfall – and getting the services of the world’s most powerful military – perhaps a $50 billion-a-year value – for a pittance.

Contributing to Japan’s stunted defense, within USG and US military circles there appears to be an unwritten rule prohibiting criticism of Japan’s defense capabilities. This is both puzzling and frustrating. Rather than offering feel good praise for the ‘alliance’ and our ‘partners’, and insisting all is well, it would have been better to have listened to one respected JSDF officer who commented a few years ago, “Tell us what we are doing wrong,” and, “Only our friends will tell us bad news.”