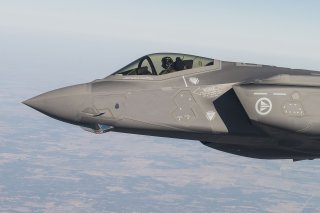 Japanese Prime Minister Shinzo Abe personally thanked President Donald Trump for his role in bringing down the cost of the F-35 fighter jet, Trump told the Associated Press in an interview Friday.

Trump pointed to the F-35 cost reduction as one of the successes of his first 100 days in office, touting the money he saved taxpayers and how much other countries will benefit from the decreased cost of production.

“The first thing [Shinzo Abe] said to me, because it was right at the time I did it, he said, ‘Could I thank you?'” Trump told the AP.

The U.S. saved quite a bit more in its most recent contract for the jets. “I saved $725 million on the 90 planes. Just 90,” Trump said. (RELATED: New F-35 Contract Shows Exactly How Much Trump Saved Taxpayers)

“General [Jim] Mattis, who had to sign the deal when it came to his office, said, ‘I’ve never seen anything like this in my life,'” Trump said.

Trump criticized the F-35 program in December, proclaiming on Twitter that the U.S. would open competition between the F-35, made by Lockheed Martin, and the F-18 Super Hornet, made by Boeing.

“[Trump] helped accelerate that along, and I think he put a sharper focus on price and how we drive the price down,” Hewson told reporters in March. “He absolutely did contribute to us getting to closure on that.”

The F-35 price reduction had been in process for years. Since the very start of the program, Department of Defense contracting officials planned on the price per jet to decrease with each bulk buy, as manufacturers streamlined the production process.

The Pentagon had been negotiating the new contract, called the LRIP-10 after the low-rate initial production process used to procure the fighter jets, for over a year. Trump’s hands-on approach to negotiating on a defense contract took many by surprise, but Trump said asking direct questions about similar issues is a shift from past presidents, and he will continue to push for greater savings.”

“More. I’m gonna get more than that,” Trump said of the F-35. “This was a thing that was out of control and now it’s great.”

“We went from a company that wanted more money for the planes to a company that cut. And the reason they cut — same planes, same everything — was because of me. I mean, because that’s what I do,” Trump told the AP.