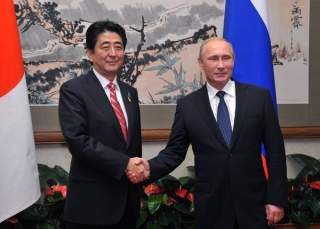 Japanese Prime Minister Shinzo Abe will do “whatever it takes” to sign a formal peace treaty with Russia ending their outstanding territorial dispute, according to state-run Russian media outlets.

According to the reports, which cited Japan’s Kyodo News Agency, Abe pledged in a speech on Monday to redouble his efforts to resolve Japan’s long-standing territorial dispute with Russia over the Kuril Islands (Northern Territories).

“I shall resolve the problem of [the] Northern Territories and conclude a peace treaty," Abe was quoted as saying in a speech with a local mayor. He added, “As a politician and prime minister, I will achieve it whatever it takes [sic]."

Russia and Japan have long disputed the four islands in the southern Pacific. Indeed, the two countries technically remain at war as the territorial dispute prevented them from ever inking a formal treaty ending their WWII hostilities.

Early on in his current term as premier, Abe launched a charm offensive towards Russian President Vladimir Putin that was aimed at finally resolving the dispute. The outreach saw early results as Abe made a historic visit to Russia in April 2013, which was the first time a sitting Japanese prime minister had visited the Kremlin in over a decade. During the trip, Abe and Putin directed their top diplomats to redouble efforts to resolve the dispute in a timely fashion.

This positive momentum was derailed, however, by the rising tensions between the United States and Russia over events in the Ukraine. Despite his interest in improving ties with Russia as a way to balance against China, Abe ultimately adopted sanctions against Russia over Crimea in order to maintain solidarity with the United States and other Western powers. He also rescinded an invitation for Putin to visit Tokyo in the fall of this year.

In response, Russia held military drills on the disputed islands in August of this year. The following month Moscow announced plans to spend $1.25 billion over the next decade to further develop the islands.

Abe’s comments on Monday may signal his intention to resume his earlier outreach efforts towards Moscow.

On the other hand, it is just as likely that Abe’s speech was motivated by domestic politics. Abe made the comments while meeting with Shunsuke Hasegawa, the mayor of Nemuro of Hokkaido Prefecture, which is located right near the Kuril Islands. The territorial dispute with Russia is an important local political issue as many Hokkaido residents used to live on the Kuril Islands before being forced into exile by Russia.

For what it’s worth, Russia appears to be interpreting Abe’s comments as a domestic political ploy. A ITAR-TASS report on Tuesday said that most “experts” believe that, “Japanese Minister Shinzo Abe's declared intention to conclude a peace treaty with Russia after resolving the territorial dispute is first and foremost addressed to the domestic audience on the eve of elections.... Some interpret this pledge as an attempt to put pressure on Moscow."