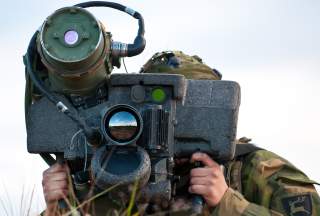 When Russia provided military support to separatists in Ukraine, columns of Russian tanks were instrumental in turning back Ukrainian Army offensives and seizing government strongpoints, notably the Donetsk International Airport in January 2015. For hawks like Senator John McCain pushing for the United States to provide direct military aid to Ukraine, Javelin missiles were cited as a key weapon system that might have reversed the Ukrainian Army’s fortunes on the battlefield—and one far more practical to put into action than a main battle tank or jet fighter. However, providing missiles of undeniably American origin would also have sharply escalated the conflict between the United States and Russia. Unlike the widely exported TOW missiles or various Russian weapon systems, there was no credible way for such weapons to end up in Ukrainian hands without American authorization. Thus: no Javelins for Ukraine.