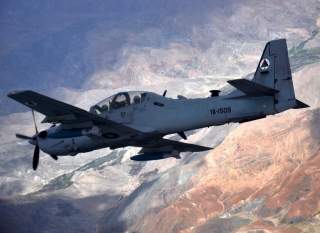 Back in 2009, when the Department of Defense had but one problem on its mind, the war in Iraq and Afghanistan, the Air Force had the idea of developing a light air support (LAS) aircraft for the close air support (CAS) mission for counterinsurgency operations. The focus was on a non-developmental platform, one that was cheap and easy to operate and maintain, intended primarily for foreign militaries with limited budgets, infrastructure and trained personnel. Initially, the Air Force thought it might acquire some number of this aircraft for its own use, but the decision was made to focus entirely on exporting them to allies and partners. At present a total of 15 aircraft are being provided to the Afghan National Air Force.

After a difficult development program marred by repeated starts and stops due to successive contract award protests and lawsuits by the losing competitor, the winning team of Sierra Nevada Corporation and Embraer was able to begin delivery in 2014 of the A-29 Super Tucano to the Air Force with the first four aircraft arriving in Afghanistan in January, 2016. The sturdy, propeller-driven Super Tucano is a perfect fit for environments such as Afghanistan. It is a relatively simple, sturdy aircraft, able to operate from austere airfields and easy to fly and maintain. The A-29 carries advanced electro-optical sensors, modern avionics, a laser target designator and a wide variety of precision munitions. The Sierra Nevada/Embraer team also provided training for Afghan pilots and mechanics, mission planning stations, mission debrief systems, long lead spares, Afghanistan base activation, site surveys and flight certification support.

The explosion of jihadist insurgencies across Africa, the Middle East and Asia has created an almost insatiable demand for airborne ISR and CAS. The U.S. Air Force, Navy and Marine Corps have conducted tens of thousands of sorties in the battle against ISIS in Iraq and Syria alone. Yet, even with their fleets of manned aircraft and remotely piloted vehicles, there is only so much air support that the United States and its Western allies can provide. Moreover, in countries where the U.S. cannot operate, their own militaries need to acquire aerial capabilities. Most Western combat aircraft are too expensive and complex for many countries fighting insurgencies to acquire and operate. There is a natural requirement for a platform like the Super Tucano. One of the enormous advantages of the A-29 program is the contractors’ ability to provide a variety of training and support services.

The international market for the A-29 is starting to unfold. Lebanon has an order for six of the aircraft. According to Reuters, the U.S. administration is planning to sell up to 12 A-29 LAS to Nigeria to support its struggle against the Islamist extremist group Boko Haram. Iraq is another country that clearly could benefit from acquiring some number of A-29s. From Libya to Pakistan and Somalia to Central Asia, the potential future for the A-29 is enormous.

As the Air Force looks for a replacement for the popular but obsolescing and expensive to maintain A-10, what about the A-29? The A-10 was originally conceived as a tank buster for a late 20th century Central European battlefield. It did great during the Gulf War and in the counterinsurgency fights since 9/11. But over the past several decades, high-end air defenses deployed by potential adversaries and sold internationally have leapt ahead. The A-10 is not survivable in a modern anti-access/area denial environment. That is the main reason the Air Force wants to replace the A-10 with the more survivable and capable F-35 Joint Strike Fighter. But if Congress and popular sentiment insist on a dedicated close air support platform, that would be survivable only in a permissive environment, the A-29 might well fit the bill.