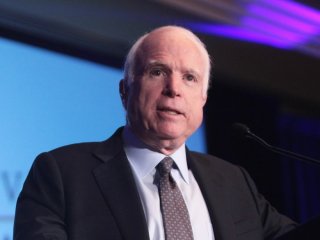 Senator John McCain, chairman of the Senate Armed Service Committee, is hopping mad about the bomber formerly known as the Long Range Strike Bomber. The B-21, as Air Force Secretary Deborah James named the LRS-B today, is to be developed by Northrop Grumman under a cost-plus-incentive-fee contract. McCain told the Defense Writers Group over breakfast yesterday that “I will not authorize a program that has a cost-plus contract—and I told them that.” While I have previously written with my colleague Rachel Rizzo that cost-plus development funding may make sense in this case, it’s easy to understand why McCain finds the continued practice “infuriating.” Waving his iPhone 6, he has often been heard to state how plenty of iconic American companies take huge risks in new product development without any government funding. But whether defense should be different, defense has been different, and for a long time, so it’s worth asking how fixed funding would change things. I foresee three effects: an informational one for the government, a financial one for industry, and even a structural one for the military itself.

Today, almost all large-scale new product development for U.S. military customers is done under government sponsorship in cost-plus-incentive-fee contracts. The exceptions found in firms like SpaceX, General Atomics and Palantir are remarkable in that they are so few. As the more conventional contractors seek, as economist William Rogerson once wrote, to secure the right to the prize of production, they bid a forecast of their future costs. As the government awards contracts partly on these forecasts, the would-be contractors have a clear incentive not to overestimate. As the Pentagon frequently—but not always—increases the funding ex post when estimates prove too optimistic, there’s no need to bid conservatively. To the contrary, it just opens a gap through which a competitor can win the development contract by underbidding himself. Decades of watching defense procurement have shown all of us precisely that.

What’s less obvious, perhaps, is that fixed-price development contracts do not completely remove that incentive. A contractor who really wants the job can still bid aggressively. If his budget needs topping off later, he can still get the cash—just from his own treasury. All the same, every dollar underbid is a dollar lost, so the bids themselves should hew closer to eventual reality. As such, with fixed-price development contracts, the government would systematically gain better insight ex ante into contractors’ own estimates of their development costs. The Pentagon does obtain its own independent cost estimates now, and audits those development contracts ex post, but there’s nothing quite like the honesty of real prices. This information should help the government limit the rolling budgetary train wrecks of the past several decades, in which multiple under-resourced procurement programs exceed their budgets, and something requires cutting eventually.

Consider how the Joint Strike Fighter project might have proceeded under a fixed-cost development contract. The development effort is billions of dollars over and years past its original estimate. Would Lockheed Martin have tolerated years of deep losses—and several years without funding at all—to secure the possibility of producing thousands of jet fighters for customers around the world? Perhaps—after all, that’s how Boeing, another of those American icons, builds jetliners. To fill the possible holes, though, defense contractors would need to keep much more cash on hand. Of late, many of the largest ones—and notably B-21 contractor Northrop Grumman—have been returning that cash to shareholders by the wheelbarrow with huge dividends and buybacks. In the short run, at least, that would have to stop.

Finally, fixed-price development contracting could change the nature of the weapons themselves. Continue with the example of the F-35. It’s possible that Lockheed Martin would have frankly demanded that the customer not tinker with the requirements en route, and thus produced instead a strike fighter with more modest aims. The company could still have found itself with a dozen customers around the world, just like Boeing does with its jetliners. But if Northrop Grumman discovered halfway through a fixed-cost B-21 development program that it had badly underestimated its costs, it could find itself seeking to terminate the contract. The big bomber really has only one customer, so the risk is binary: either the U.S. Air Force would like a more modest bomber, or it wouldn’t.

Indeed, as with Lockheed’s infamous fixed-price deal to develop the C-5A, a big enough disaster could actually terminate the company. In that case, the Defense Department provided an extra half billion dollars (real money back in 1971) to keep Lockheed solvent. If the government were actually serious about fixed-price developments, it would need to allow the contractors themselves to terminate contracts for convenience without crippling penalties. That could mean fewer great leaps forward at great and unexpected expense, and the faster failures which venture investors extol. The American arsenal could then, over a decade or two, find itself with more but smaller things. Think fewer bombers, perhaps more fighters, and many more drones.

This would serve Senator McCain’s interests in yet another way. With more modest development efforts, the Defense Department could find more bidders willing to bid, and even offer competitive prototypes with their own money. With faster failures, the Pentagon would need to start programs more frequently, giving bidders more opportunities for business. As such, the defense industry would be offering the Defense Department more of the competition McCain craves.

James Hasik is a senior fellow at the Brent Scowcroft Center on International Security. This article first appeared in the Defense Industrialist.