Just How Many New Columbia-Class Missile Submarines is the Navy Building? 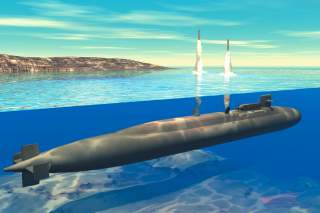 The United States Navy may build more than 12 Columbia-class nuclear-powered ballistic missile submarines (SSBNs). While the Pentagon had previously stated that it needed 12 Columbia-class submarines, the new Nuclear Posture Review sets that number as a floor.

“The Columbia-class program will deliver a minimum of 12 SSBNs to replace the current Ohio fleet,” a predecisional version of the Nuclear Posture Review obtained by The National Interest reads.

“If Navy shipbuilding funding was not already insufficient to build 355 ship Navy, then building even two more SSBNs would provide greater margin to ensure the Navy can always maintain the minimum submarines required for uninterrupted alert coverage would be a worthwhile endeavor,” retired U.S. Navy submariner Thomas Callender, currently a senior research fellow for defense programs at the Heritage Foundation, told The National Interest.

As Callender explained, the Navy needs a bare minimum of 12 Columbia-class boats to maintain 10 available submarines. “Six SSBNs in the Pacific and four in the Atlantic is the bare minimum required to provide uninterrupted alert coverage for the combatant commander.  Geography is the reason for six in Pacific,” Callender said. “Twelve gives you 10 later in Columbia’s life when I have SSBNs undergoing depot maintenance. We needed 14 Ohios because they had mid-life refueling which took them out of operations for longer.”

However, with only a dozen vessels in the class, the Columbia program does not have any margin for failure. “Twelve doesn’t really provide any buffer were something unexpected to occur and take an SSBN out of operations for extended period of time,” Callender said. “This could be a hedge in language to use a bargaining chip with Russians or could signal intent to provide increased margin to operational minimum force.”

Kingston Reif, director for disarmament and threat reduction policy at the Arms Control Association told The National Interest that calling for a floor of 12 Columbia-class boomers could be a way to insulate the program from any potential cuts. “Some military leaders have in recent years referred to 12 as a minimum. This could be a way to counter calls for less than 12,” Rief said. “But one could also imagine several reasons why the might want more than 12, such as delays or changes in scope to the upgrade efforts for the other legs of the triad, uncertainty about force structure requirements in the aftermath of New START, and concern about the future survivability of the sea-leg of the triad.”

Even if the Navy has good reasons to want more than a dozen Columbia-class SSBNs, the problem will be costly. “The problem, however, is that the cost of the current 12-boat program is already enormous and will be a significant challenge to execute without eating into non-nuclear shipbuilding requirements - to say nothing about getting to a 355 ship Navy,” Reif said.

Meanwhile, the Navy wants to continue building the Columbia-class past the initial SSBN version with a SSGN cruise missile carrier variant. “Combatant Commanders and SOCOM [U.S. Special Operations Command] have stated a desire to have a new SSGN,” Callender said. “The Virginia class with VPM [Virginia Payload Module] doesn’t provide the concentrated firepower of SSGN.”

The problem for the Navy will be industrial capacity if it chooses to build a new Columbia SSGN variant. “There is currently no slack or industrial capacity to build an SSGN until the 12 submarine Columbia SSBN build is complete,” Callender said. “I think a future SSGN is a possibility, but it will depend on funding and the competing need to build surface fleet to in attempt to reach 355 ships.”

However, a decision will have to be made relatively soon. “The last Columbia-class SSBN is procured in 2035 per current plan,” Callender said. “That means the Navy could procure its first SSGN in 2036 if the design is mature. That means the Navy needs to decide and begin design no later than 2026 (based on average of 10 years for acquisition program development). They should be able to compress this some since not a completely new design, just modifying Columbia design.”

But all of that depends on the Congress getting its act together to consistent pass budgets.