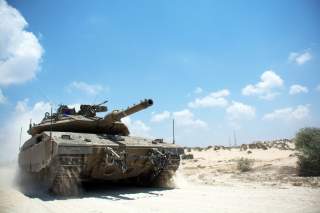 Protests and riots against America’s embassy move to Jerusalem have been ongoing for weeks, but reached their peak on May 14, the day the U.S. opened the new embassy. However, both the embassy-opening and the protests reflected the fact that May 14 was the day that Ben Gurion declared Israeli independence—a time of celebration on the Israeli side of the wall, or the Nakba (“Catastrophe”) in Palestinian historical memory, the moment in which Palestinians were destined to become a stateless people. The opening of the U.S. embassy in Jerusalem, however, rubbed salt into the wound and both sides have made increasing use of new tactics and technologies, such as drones, in their clashes with one another.

For instance, since March 2018, the Israeli Defense Force has used two types of drones to release tear gas on Palestinian protesters—first a design which sprayed the gas from the air, then a reportedly more effective model that dropped canisters of gas, which you can see in this video.

While tense but non-violent Palestinian protests took place throughout in Israel and the West Bank, the situation was different in Gaza. Nearly seventy percent of the nearly two million Palestinians populating the 141-square mile territory (the third most densely populated polity in the planet) are refugees or the descendants of refugees. Many Palestinians were displaced from their homes following wars in 1948 and 1967. Since then, Israel has not accepted their return, instead starting in the 1990s to enclose Gaza with walls, fences and military checkpoints in the name their national security.

The barriers reduced the frequency of attacks on neighboring Israeli settlements, but left nearly half of the population inside Gaza unemployed and with little ability to seek work or medical care outside of the Strip. Living conditions continued to deteriorate when Hamas, a terrorism-promoting fundamentalist group, was elected to power there in 2006, and seized complete control in 2007 following a conflict with the Palestinian Authority. Hamas has encouraged Palestinians to attempt to forcibly cross the border in order to assert their right to return.

In response, Israeli security forces have made extensive use of snipers using live ammunition to shoot those attempting to storm the fence. The snipers generally target the protester’s legs, which can, of course, still have lethal consequences. As a local Doctors Without Borders branch describes treating 800 persons injured by sniper fire, those shots exhibit “fist-sized exit wounds” and “bones pulverized into dust.”

On May 14 alone, around 60 Palestinians were killed and more between 800 and 1,300 reportedly injured with gunshot wounds. One of the reasons for this are the Israeli Defense Forces’ (IDF) rules of engagement, which state that any attempt to approach within 300 meters of the border fence with an intent to damage or cross it can incite a lethal response. At the same time, it has been reported that Palestinians have attempted to plant bombs to blast through the barricades and cross the border. Israeli responded not just with snipers, but by using jets and tanks to unleash missiles and shells on five targets throughout the strip.

This doctrine and use of high military technology has long precedent. In 2007, Israel began installing robotic .50 caliber sentry machineguns, based on the Samson Remote Weapon Station, on towers along the borders. These are remotely operated by young female Israeli soldiers and have reportedly killed dozens of Palestinians.

Israel maintains the use of lethal force against Palestinians is justified as effectively a wartime act of self-defense, maintaining that Hamas is a hostile military force. For instance, twenty to thirty of those killed have been Hamas members. Therefore, Hamas certainly played a role in promoting the protests and it appears to have been convinced to curb their intensity on May 15 at Egypt’s behest.

However, human rights organizations argue that international law allows intentional use of lethal force by police only in order to defend human lives, not prevent damage to or circumvention of a wall or barricade. Faced with snipers, tear gas, fences and dense barbed wire barriers, the Palestinians mostly appear to be wielding slings and slingshots, and have failed to harm any IDF personnel.

The protester’s most effective tactic has been to use of incendiary kites carrying Molotov cocktails, which have ignited forest fires behind the Israeli side of the wall. Israel in turn has deployed drones to try to hijack or cut down the kites.

The use of drones and remote weapon systems is sure to proliferate across the globe because the technology is already cheaply available and highly in demand, not only with authoritarian regimes ranging from China to Egypt, but in democratic governments such as the United States. Already, the extensive disbursement of military equipment to U.S. public security forces has included drones, which have been used to hunt for police suspects and, in one prominent incident, to kill the Dallas police sniper with a bomb.

Cumulatively, drones will make it easier for security forces to exert force against protesters while placing themselves at less risk. However, drone technology may also offer new asymmetric tactics to protesters.

For example, in 2016 Native American water protectors protesting the construction of Keystone pipeline in North Dakota used drones to monitor and record the actions of police forces. The footage of security forces deploying high pressure hoses and stun grenades against the protesters helped rally public support for their cause. However, authorities then successfully requested the FAA declare the protest zone to be restricted airspace (only to the protesters, not security forces opposing them), and police snipers began shooting drones down with legal impunity.

Drones could also be, and have been, wielded more for destructive purposes by non-state actors. ISIS and Syrian rebels have modified hundreds of commercially available drones into grenade-dropping attack platforms that are difficult to defend against. Another example, is a criminal gang in Florida reportedly used a drone swarm to disrupt a police sting. One might speculate that the protesters in the Gaza strip would make use of commercial drones instead of kites if they had better access to them.

Many people’s attitudes towards the use of force against protesters is liable to change fluidly according to their political sympathies. If one opposes the protester’s cause, then any amount of state violence and deployment of hardware is justified, and any protesters that are harmed or killed “had it coming” due to their disregard for the law.

However, if one sympathizes with the protesters, any measures employed by the state to maintain order and mitigate damage are portrayed as unduly repressive and illegitimate, and all protesters are either innocent of or justified in any violent actions they themselves undertake.

Stepping aside from these subjective extremes, a democratic society supposedly acknowledges both the need and right for people to express their discontent, while allowing the state to take measures to avoid loss of life and undue destruction of public goods. The Gaza protests have been criticized because the Israeli defense forces have extensively resorted to the use of lethal force against protesters that, however angry and violent, clearly demonstrated little ability to threaten the security forces facing them.

However, while new technologies may continue to make it easier for authorities to wield force from a distance without fear of retaliation, those technologies may also eventually be used by anti-state forces to disruptive effect. One can only image how drones might be used in future Israeli-Palestinian conflicts.