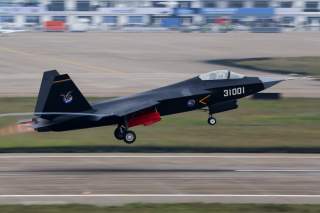 China is rapidly augmenting features in the South China Sea (SCS) on industrial scale—hundreds of acres (more than 4 square km)—that even its neighbors combined cannot match. “Features,” is the key word here, because many were previously small rocks or reefs not legally considered “islands.” Then China used some of the world’s largest dredgers to build up some of the most pristine coral reefs above water with hundreds of tons of sand, coral cuttings, and concrete. U.S. Pacific Fleet Commander Admiral Harry Harris aptly terms China’s creation a “Great Wall of Sand.”

But it’s what China is constructing atop its reclamation that most concerns its neighbors and the United States: militarily relevant facilities, including runways that could allow Beijing to exert increasing influence over the contested SCS.

Satellite imagery of Fiery Cross Reef shows over 1,300m of runway completed. The section of reclaimed land where this is occurring could support a runway up to 3,110m long. Fiery Cross is one of the seven features China occupies and is augmenting in the Spratly Islands. At another Spratly feature, Subi Reef, reclamation may also yield sufficient space for an airstrip of similar length. Internet fora have mentioned Mischief Reef as another possible candidate.

Like many other SCS features, Fiery Cross Reef has long been contested by multiple parties (mainland China, Taiwan, Vietnam, and the Philippines, in this case). Using a UNESCO weather monitoring project as its justification, in 1987 China occupied Fiery Cross Reef, then submerged at high tide save for two small rocks. China initiated construction in early 1988, with a two-story cement structure appearing in 1990. By early 2014, facilities had grown to a ~200-personnel garrison and greenhouse for food production, coastal artillery including a DP-65 grenade launcher, a wharf and helipad, and communications equipment. Fiery Cross served as a center for logistics and reclamation for China’s other Spratly features.

Beijing itself has stated officially that there will be military uses for the new “islands” it has raised from the sea. On March 9, China Foreign Ministry spokeswoman Hua Chunying stated that Spratly garrison “maintenance and construction work” was intended in part for “better safeguarding territorial sovereignty and maritime rights and interests.” Hua elaborated that construction was designed in part to “satisfy the necessary military defense needs.” Chinese military sources employ similar wording.

- better facilities for personnel stationed on the features

- airstrips for civilian and military aircraft

Commander of the U.S. Pacific Command Admiral Samuel Locklear’s April 15 testimony before the House Armed Services Committee supports this assessment: In addition to basing Chinese Coast Guard ships to expand influence over a contested area, “expanded land features down there also could eventually lead to the deployment of things, such as long-range radars, military and advanced missile systems and it might be a platform for them, if they ever wanted to establish an air defense… zone… for them to be able to enforce that from.”

Beijing contends that its SCS island building activities are primarily for non-military purposes. On April 17, Foreign Ministry Spokesman Hong Lei listed “fulfilling the Chinese side’s assumption of international responsibilities and obligations in maritime search and rescue, disaster prevention and disaster reduction, ocean scientific research, meteorological observation, environmental protection, navigation safety, fishery production and services, and in other areas.” Beijing touts this brief list as representing unusual transparency on its part: “As a friendly gesture, the Chinese government has also disclosed the full details of the construction work on its territory to reassure its neighbors and remove understandings.”

Having reiterated this list, Chinese Ambassador to the U.S. Cui Tiankai asserts, “China’s construction of military facilities in the area ‘is only natural and necessary’ and that they are purely for defensive purposes.” He reasons without explanation, “If these facilities could not even defend themselves, how can they render service to others? If China could not safeguard its own sovereignty, how can it shoulder greater responsibilities for international stability?” Left unaddressed: what foreign force would seek to disrupt China’s provision of positive public goods?

A 3,000 m runway could support operations of most major military aircraft. In China’s case: a wide variety of fighter, electronic intercept, airborne early warning and control, and tanker aircraft.

J-11 fighters might be prioritized for their multirole versatility. A 1,300 m runway is long enough to allow for comprehensive J-11 operations, including even emergency stop at near takeoff velocity during aborted takeoff—albeit with very little margin for error in case of problems.

Forward deployment of at least some such aircraft could support serious patrols of southern SCS airspace in a way that China would have found difficult from preexisting land. This could also offer new deterrence and warfighting options, particularly in a region with few formidable air forces.

Supporting and fueling the aircraft would be logistically demanding, but well within China’s capabilities. Corrosion from saltwater spray could be mitigated by rotating deployment of aircraft, washing them regularly, and ideally protecting them in hangars—possibly in simpler versions of the accommodations that B-2s enjoy on Diego Garcia. Fuel could be stored in tanks or even in cheaper bladders; although the latter are less practical for long-term storage, especially on coral-based ground with sharp projections.

Fuel storage might be easiest simply in tanker boats, anchored off SCS islands. All such stockpiles would be vulnerable to attack, but so are small features in general. Principal relevant aircraft weapons—primarily PL-series air-to-air missiles—are small and light, and hence easily stored. There may be some competition between China’s navy and air force for control of operations, with the navy likely to retain the upper hand given its preexisting overwater intercept role. From the ill-fated EP-3 surveillance aircraft in 2001 to a U.S. P-8A maritime surveillance aircraft in 2014, it is Chinese naval aircraft that have intercepted them—sometimes with risky aggressiveness—in international airspace over the SCS.

One logical application for China’s current activities: to support a SCS Air Defense Identification Zone (ADIZ). Beijing already established an ADIZ in the East China Sea in November 2013. Many nations—including the U.S.—have established such zones to track aircraft approaching their territorial airspace (out to 12 nautical miles from their coast), particularly aircraft apparently seeking to enter that space.

Radars on China-controlled features can form a network providing maritime/air domain awareness for the majority of the SCS. Fighter aircraft can allow China to intercept foreign aircraft it detects operating there, particularly those that do not announce their presence, or otherwise engage in behaviors that Beijing deems objectionable.

But while any coastal state is legally entitled to announce an ADIZ, the way in which China has done so in the East China Sea is worrisome. China threatens still-unspecified “defensive emergency measures” if foreign aircraft don’t comply with its orders—orders that an ADIZ does not give it license to issue or enforce physically. This suggests that China is reserving the “right” to treat international airspace beyond 12 nautical miles as “territorial airspace” in important respects.

China’s record on maritime sovereignty fuels this concern. The vast majority of nations agree that under international law a country with a coastline controls only economic resources in waters 12 to 200 nautical miles out—and even less if facing a neighbor’s coast less than 400 nm away. But China claims rights to control military activities in that “Exclusive Economic Zone” as well.

In addition, China currently lacks long-range capable anti-submarine warfare (ASW) assets akin to U.S. P-3 and P-8 aircraft. The more “islands” it builds, even if only with helicopter pads (as opposed to full runways), the more it can increase helicopter-based ASW coverage of the South China Sea. In this way, distribution of Chinese-held features could compensate for ASW helicopters’ “short legs.” In this way, China could attempt to start to negate one of the last remaining major U.S. Navy advantages—submarines—and possibly pursue a bastion strategy for its SSBNs in the SCS.